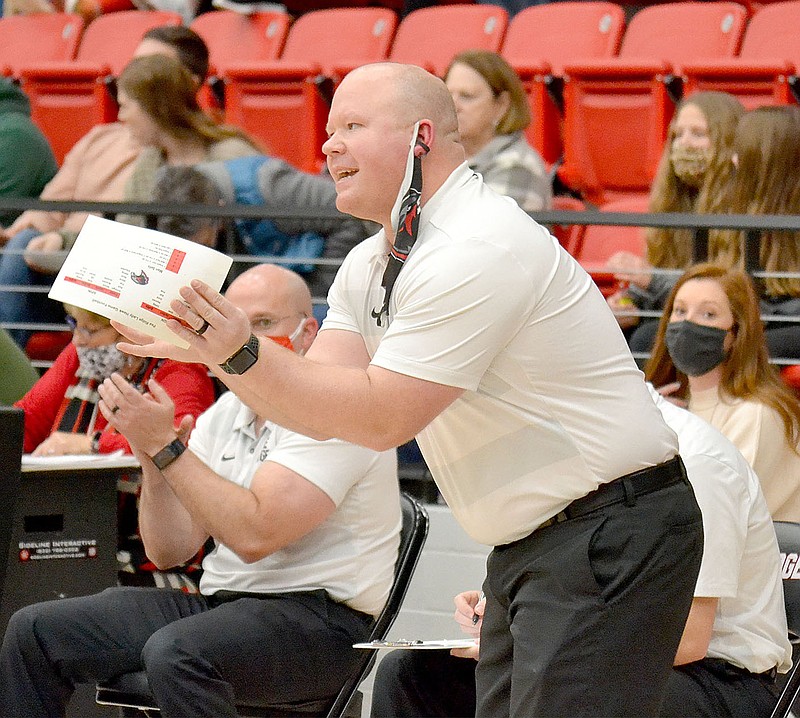 Heath Neal, head coach for the Lady Blackhawks, instructs his team as they battle the Lady Tigers from Prairie Grove in the first game in the new Blackhawk gym Friday, Jan. 8, 2021.

Heath Neal's girls kept their league mark unblemished as they prepared to go to Farmington Tuesday night to take on the defending 4A state champion Cardinals, beating Gravette then Prairie Grove 70-32 in games last week.

The snake-bitten boys team made runs at both Gravette and Prairie Grove but cold shooting and turnovers denied them victories in both contests.

Against Prairie Grove in the annual Senior Night game, the girls' 3-point line proficiency got them up on their foes early, and a lockdown defense and solid bench support nearly ran their guests out of the game as the mercy rule was invoked early in the fourth quarter. The Lady Hawks got ahead 63-31 after senior Blakelee Winn ripped her team's 10th shot from behind the arc. Pea Ridge would go on to make one more trey to score 33 points deep, one more than the Tigers entire offense output of 32.

"The girls played well, and shot well. They were excited about playing well in the first game in our new facility," Coach Heath Neal remarked. "We have to stay focused and keep working."

The teams that get the most assists and employ the best defense usually prevail with Pea Ridge scoring first on a pass from senior Ravin Cawthon to Winn. The Tigers would then spend nearly 60 seconds vainly trying to find a weak spot in the Hawk defense, losing the ball on a 5-second count. The Tigers would tie the score on two free throws 30 seconds later but junior Lauren Wright shot two from downtown to give the Hawks an 8-2 lead and they would never trail again.

Prairie Grove would finally sink their first field goal of the game midway in the first period, but junior Bella Cates responded 5 seconds later with a 3-pointer to put the guests further behind at 11-4. The Tigers came back with a short jumper but senior Aidan Dayberry rubbed salt in the wounds by firing in the Hawks' fourth straight 3-pointer, and after Winn stole the ball a few seconds later, Cates rolled in a layup for an imposing 16-7 lead. The Tigers would sink another pair of free shots but freshman Leah Telgemeier drained a trey for the last score of the period, sending Pea Ridge into the second quarter with a 19-9 lead.

The first two minutes of the second period were spent at the charity stripe where the visitors converted two with sophomore Sydney Spears hitting one for the Hawks. Spears then hit a short jumper, with Cates running under the goal to drain a reverse layup and put the Tigers in a tough place, trailing 24-11.

The team traded points for awhile, with the Tigers converting two from the line, Dayberry negotiating heavy traffic to ring up a layup, the Tigers hitting a close in floater, and with Wright scoring again in the paint as Pea Ridge led 28-15 with 3 minutes left in the half.

In what was Prairie Grove's last chance to make a game of it, they hit three free throws and a short jumper to draw within 8 at 28-20. Spears came back with a layup, Telgemeier stroked a free shot and Winn scored on a rebound shot as the halftime buzzer sounded to erase the Tiger's late progress and send the hosts into the break leading 33-20.

The second half started like the first with Cawthon flipping a pass to Winn to start the scoring. Winn would score again moments later in the paint as Pea Ridge was building a huge lead at 37-20. The Tigers then got another short jumper to fall, but Dayberry answered with a trey, with another long shot dropped in by senior Hayley West after a Tiger score put the Hawks up 43-24.

Dayberry would increase the lead to 21 points with a finger roll lay in down the lane and after the Tigers fired in their first trey of the game, West pulled off a steal under the Hawk goal, banking it in for a 47-27 advantage. Prairie Grove would score on a rebound shot and a layup with Wright converting a pair of charity tosses, and the quarter ended on a high note as Telgemeier drained a trey in the final seconds to give the Hawks a near insurmountable lead at 52-31.

The near insurmountable lead quickly became a flat out insurmountable one as the Hawks started the fourth period by scoring the first 14 points of the quarter to pile up a 35-point lead and ignite the mercy rule. Winn started the onslaught with a steal and layup, then another layup. Winn also canned two 3-balls sandwiched around a Cawthon free throw, with West dropping in the Hawks' 11th trey for a 66-31 lead.

The Tigers would only score 2 more points in the game, both via the charity stripe. Senior Jordyn Allison closed out the scoring with a shot in the paint followed by a steal and layup.

The Hawks' tight defense allowed only nine field goals by the Tigers.

Winn led the scoring with 18 markers, followed by Wright and Dayberry who both tallied 10 points. West scored 8, Telgemeier 7, Cates 7, Spears 5, Allison 5 and Cawthon 1 as nine athletes made it into the scoring book.

The Hawks were to have a big game Tuesday night with Farmington with Gentry coming to town this Friday for the Hawks' second game in their new venue. The girls' record is 12-2 for the season, with no losses registered against 4A competition.

A very fine defensive effort by the boys was not enough to overcome cold shooting and a fourth quarter avalanche of turnovers as Pea Ridge lost another close one.

Junior Jared Brewer brought the home crowd to its feet early as he drilled a 3-pointer to grab the early lead for the Hawks at 3-0 in their first game in the new Blackhawk arena. Senior Greydon Edwards made a similar shot, a buzzer beater that was shot and made well behind the arc, but the Hawks made no other shot in the opening quarter as cold shooting overshadowed an excellent effort on defense. Prairie Grove used three long shots and four shots in the paint to get out in front 14-6 after one.

Both teams put on ferocious defenses in the second quarter, with the Tigers managing to outscore the Hawks 8-7 to go into the break with a 9-point lead. Edwards scored on a layup to start the scoring in the period, then he threw a pass into Brewer under the goal for a score, before ending the quarter like he ended the first, dropping a 3-pointer on the Tigers to just beat the buzzer. Edwards' score kept the deficit in single digits as Pea Ridge trailed 22-13 at the break.

The Tigers scored first in the third to lead by 11. Sophomore Bric Cates then rolled in a layup, but two free shots by Prairie Grove kept the 11-point edge. Then the game changed.

Edwards struck from downtown to shave the deficit to 8, then Brewer slashed through for a layup to cut the Tigers' lead to 6 at 26-20. Then senior Malik Bagsby pulled off a defensive gem, drawing a charging foul, which led to Edwards stroking another trey and suddenly, the Hawks were back in it, trailing by only 3 at 26-23.

The Tigers scored on a tip shot but a 3-pointer by senior David Andrus at the top of the key brought the Tigers to within 2 by the buzzer, 28-26.

Prairie Grove scored on a layup to start the fourth quarter and the Hawks, who did not commit a single turnover in the second quarter, committed four in a row. The Hawk defense kept the Tigers from taking advantage of the miscues and when Andrus hit his second trey, the Hawks were knocking on the door, trailing by a single point, 30-29 with half the fourth quarter remaining.

However, the Hawks would then commit four more turnovers, and the rest of the game became a free throw contest. Deliberate with the ball, the Tigers forced the Hawks to come after the ball and the guests would go on to score eight free throws in the game's last 3 minutes to pull away from the frustrated Hawks.

Edwards accounted for most of the Hawk offense with 16, with Andrus having 6, Brewer having 5, and Cates 2.

Coach Trent Loyd remarked, "We just have to execute better on offense. Our defense is playing really well but we are missing too many shots and committing too many turnovers. We are still in the hunt, though. We can turn it around and finish well." 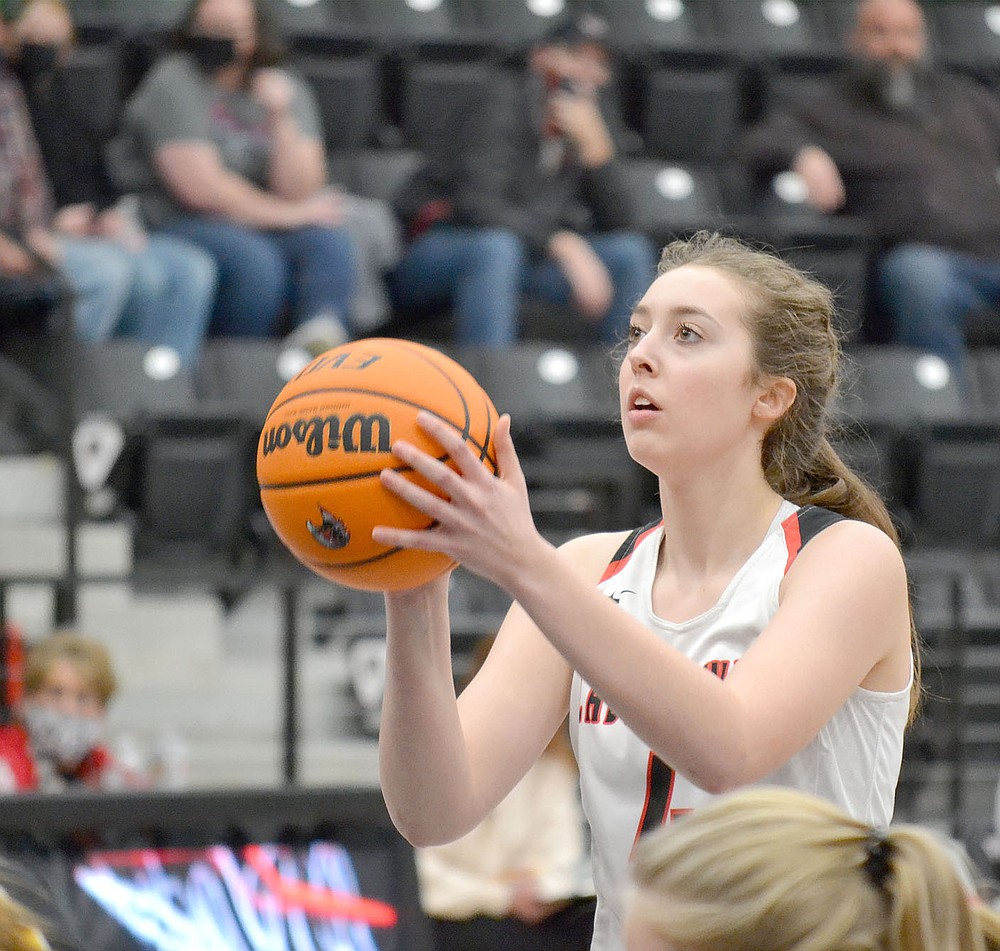 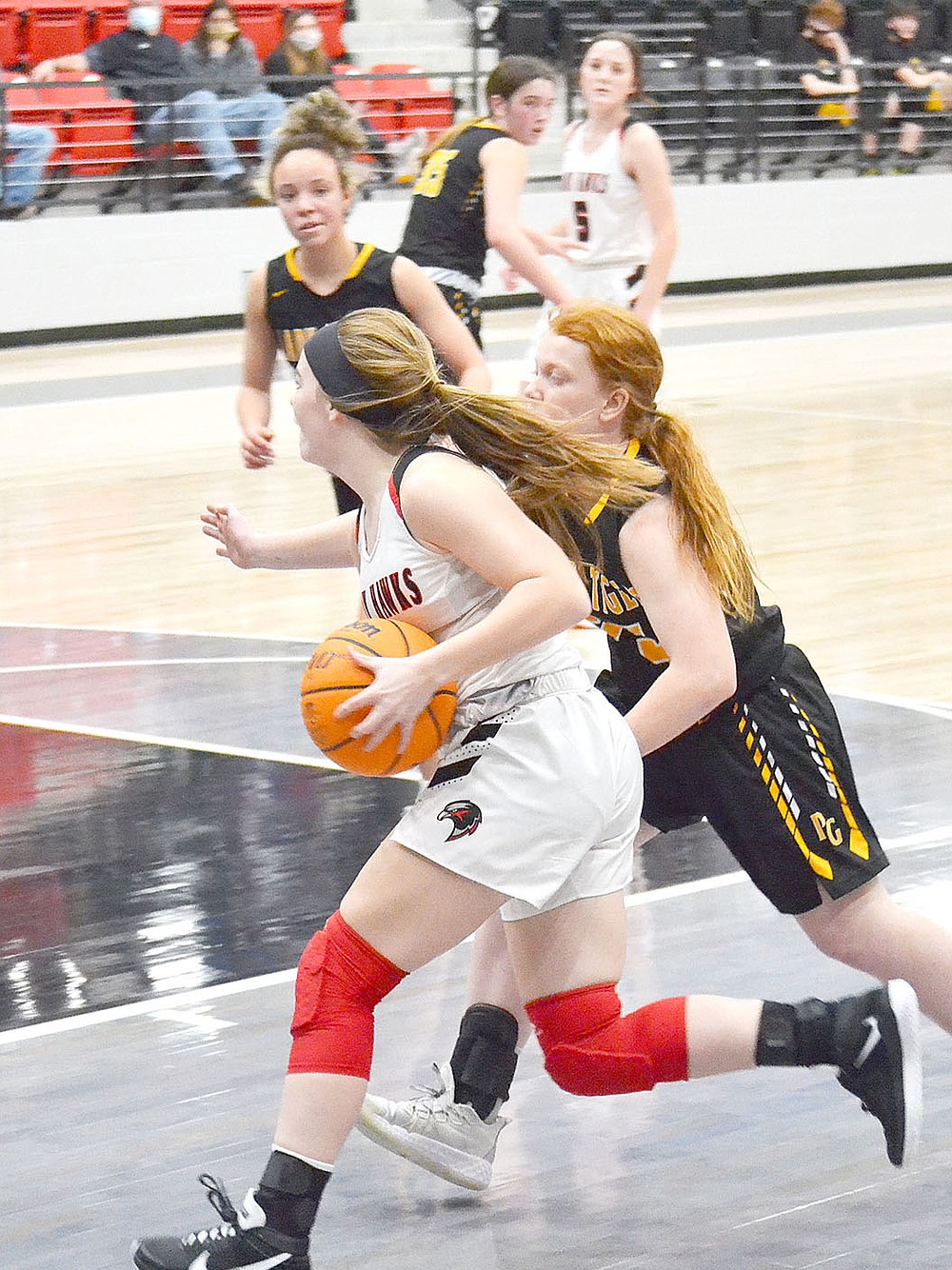 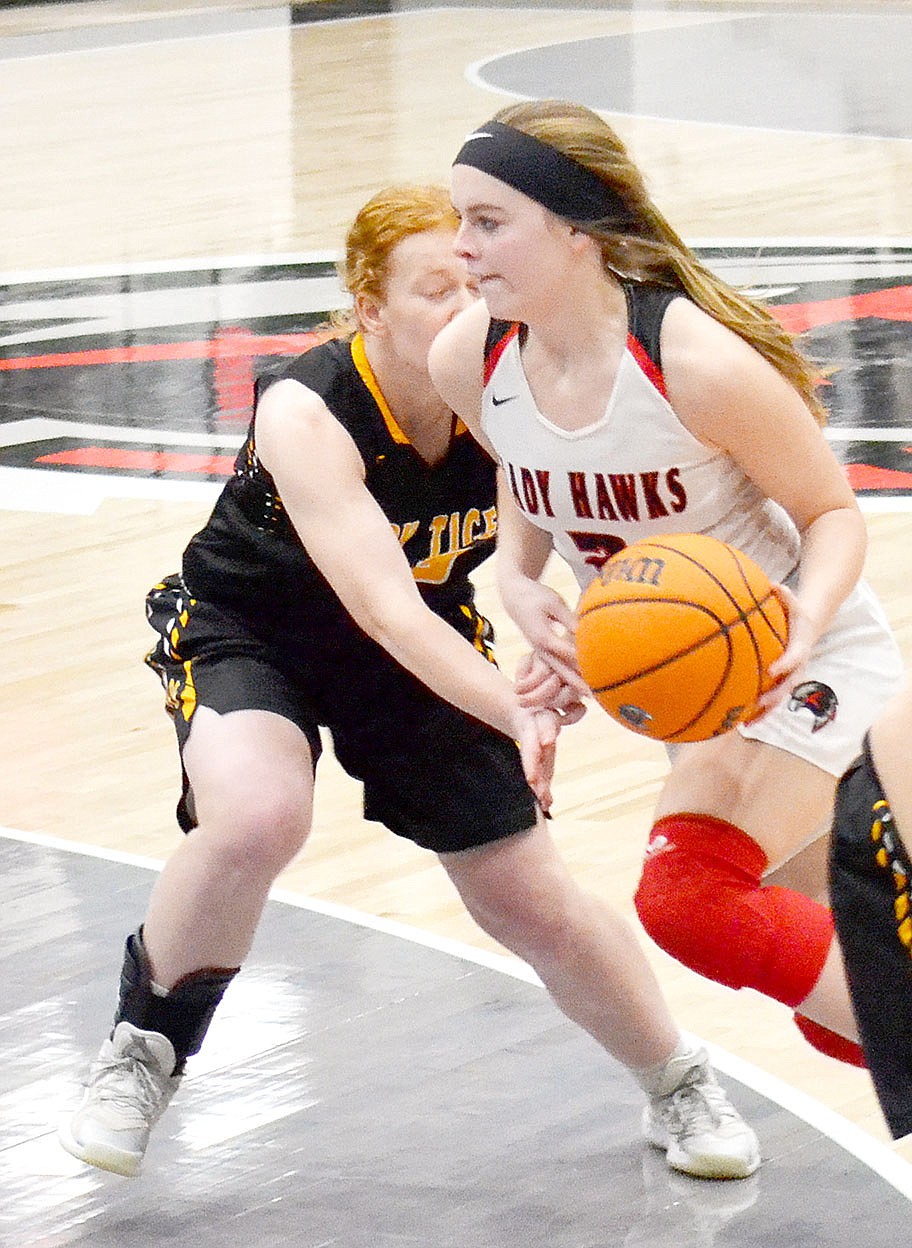 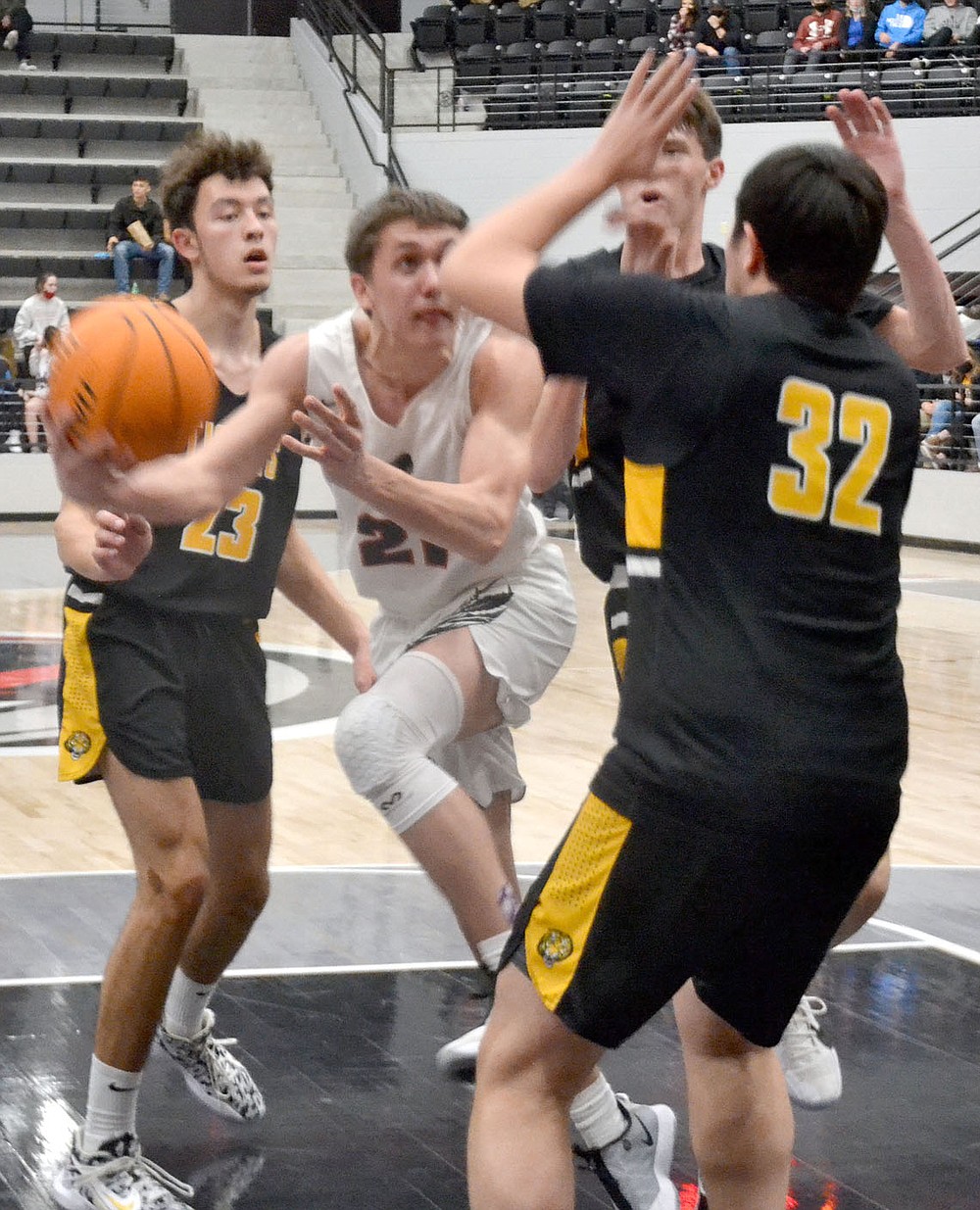 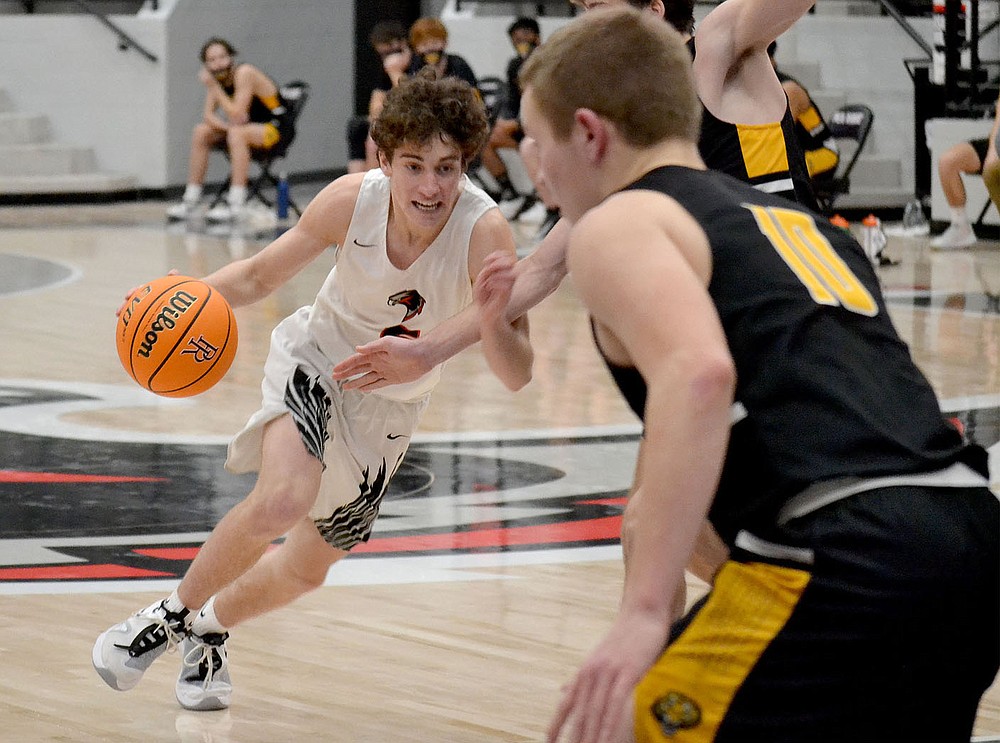 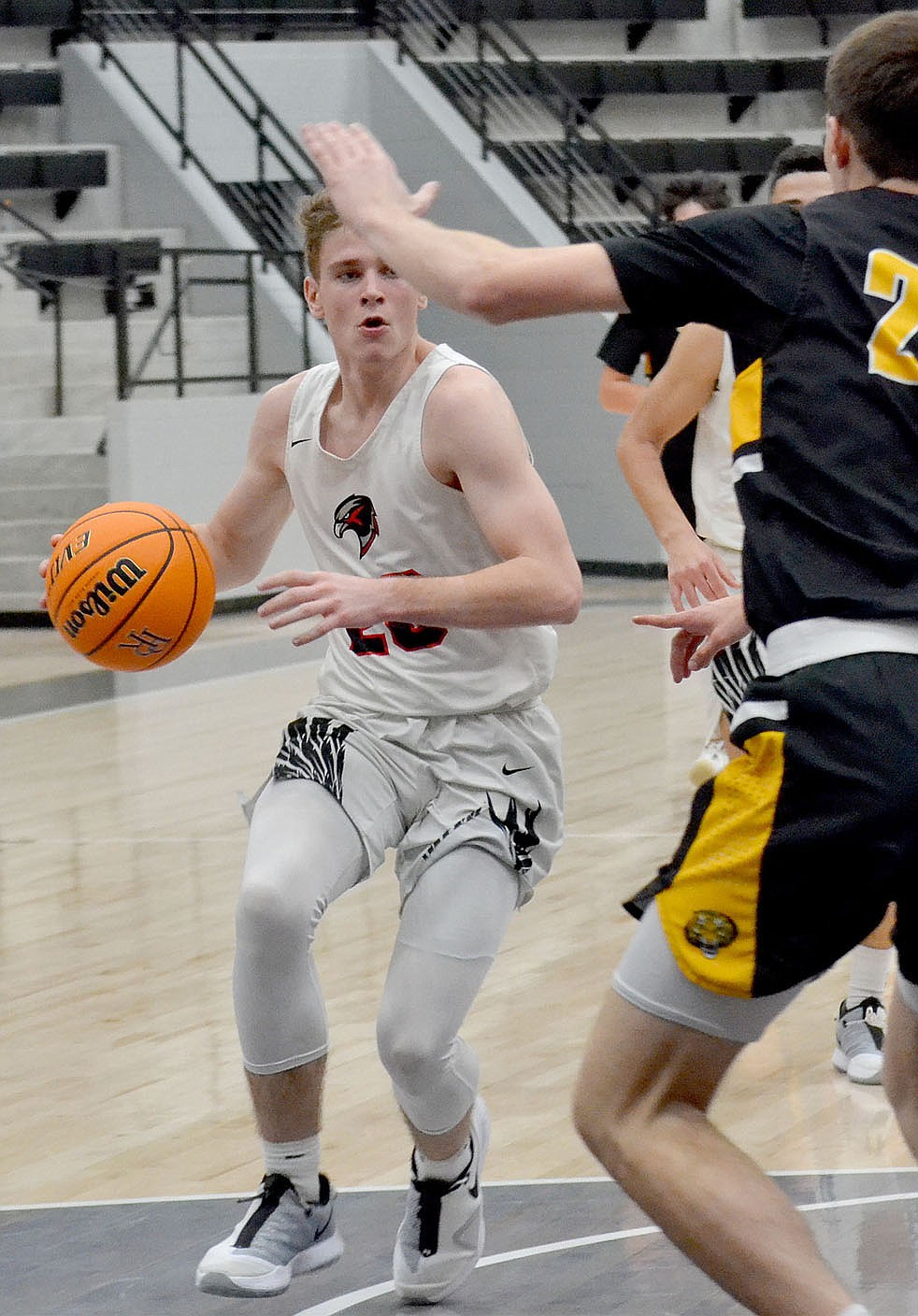 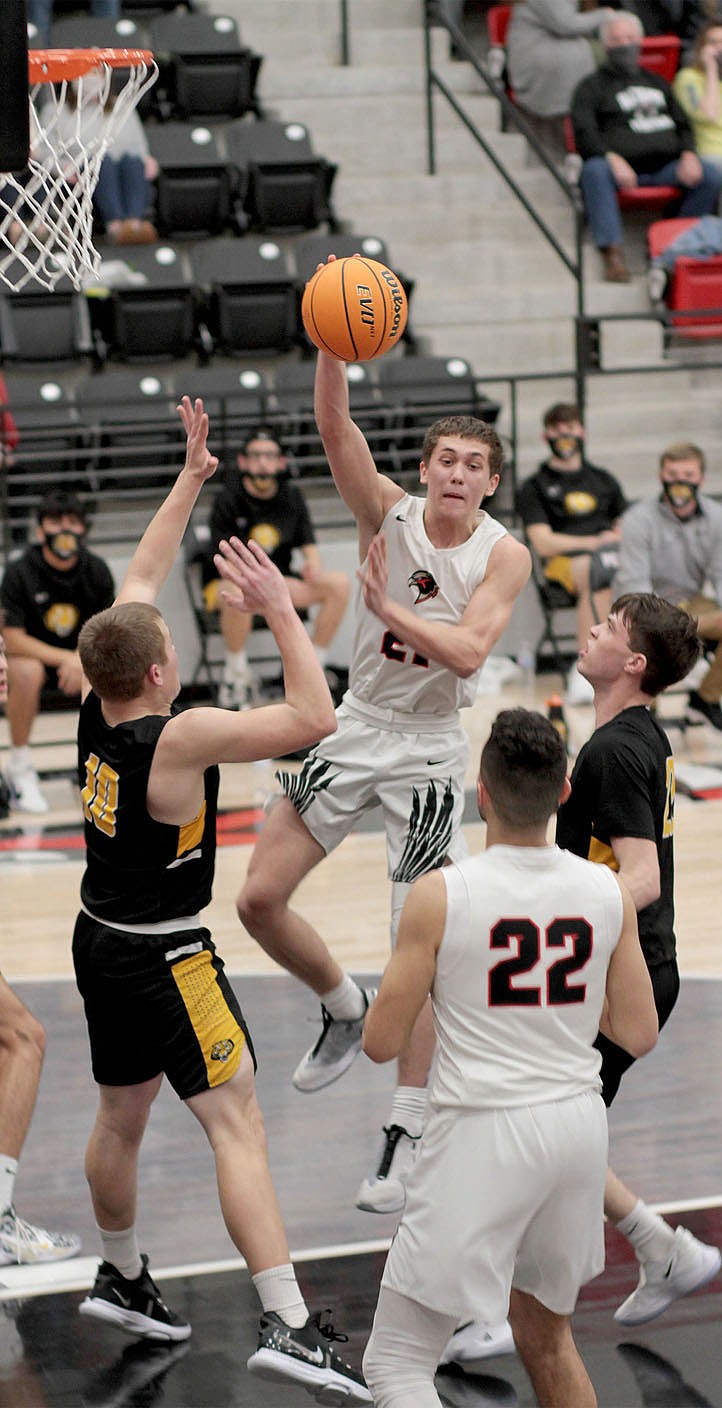 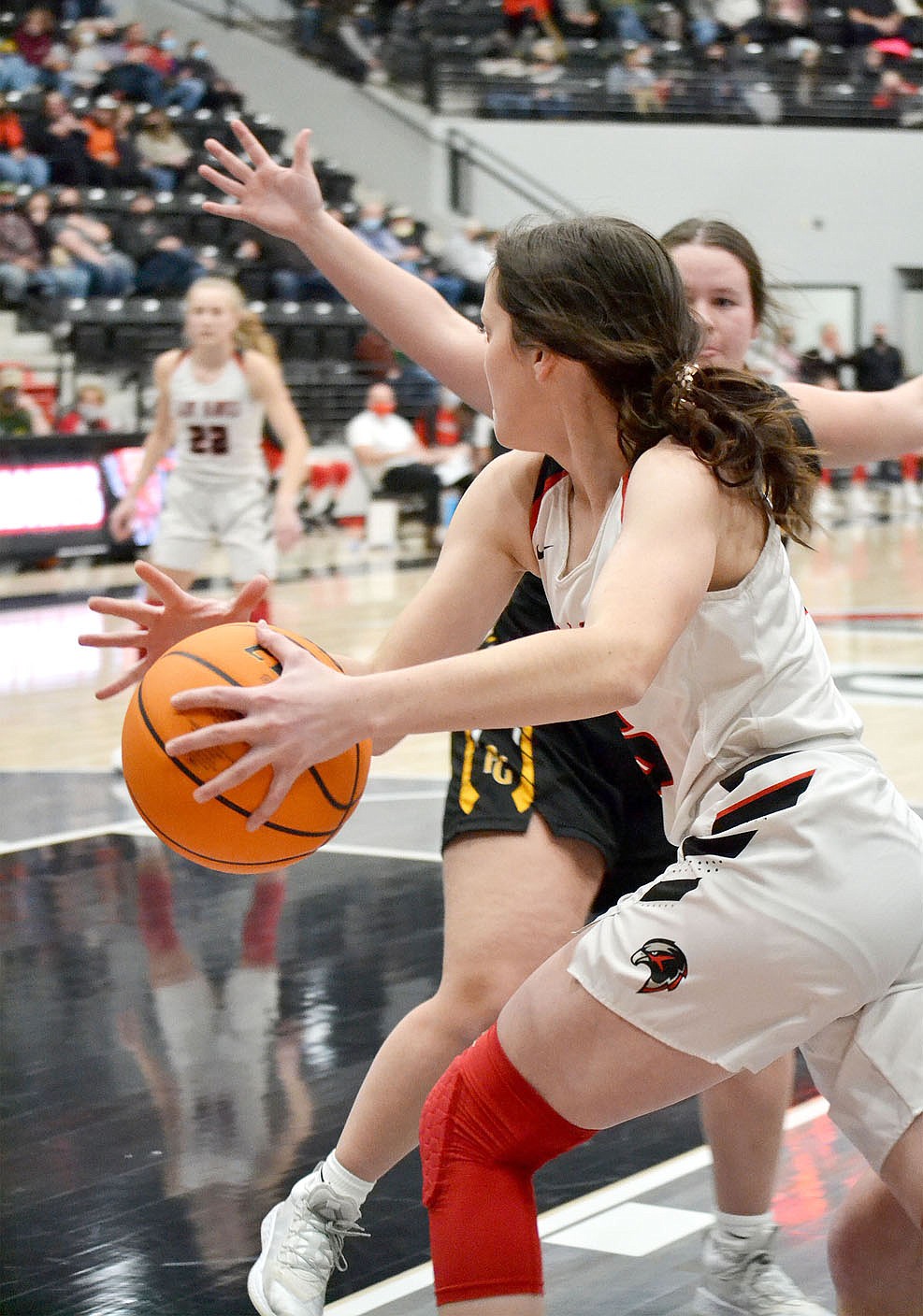 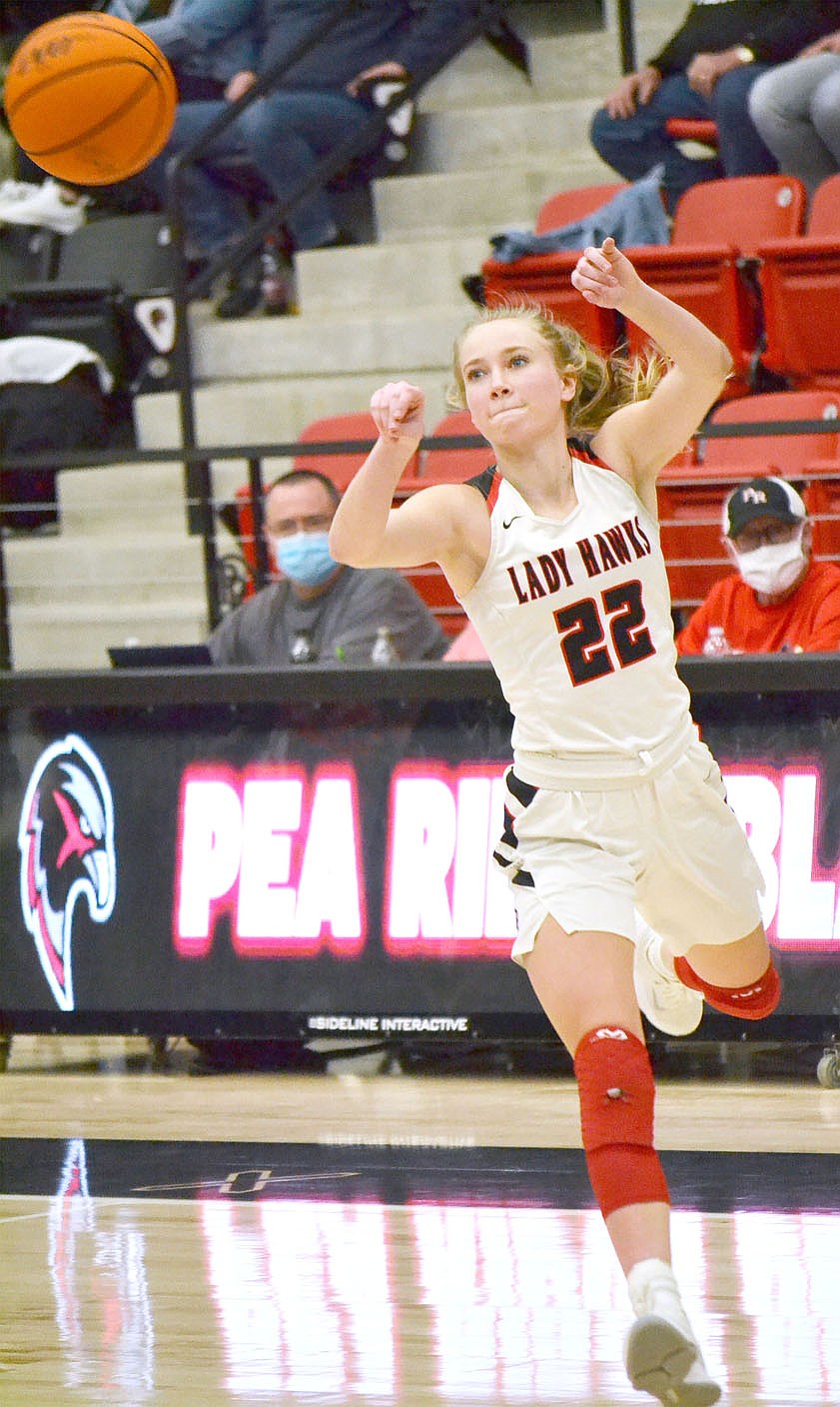 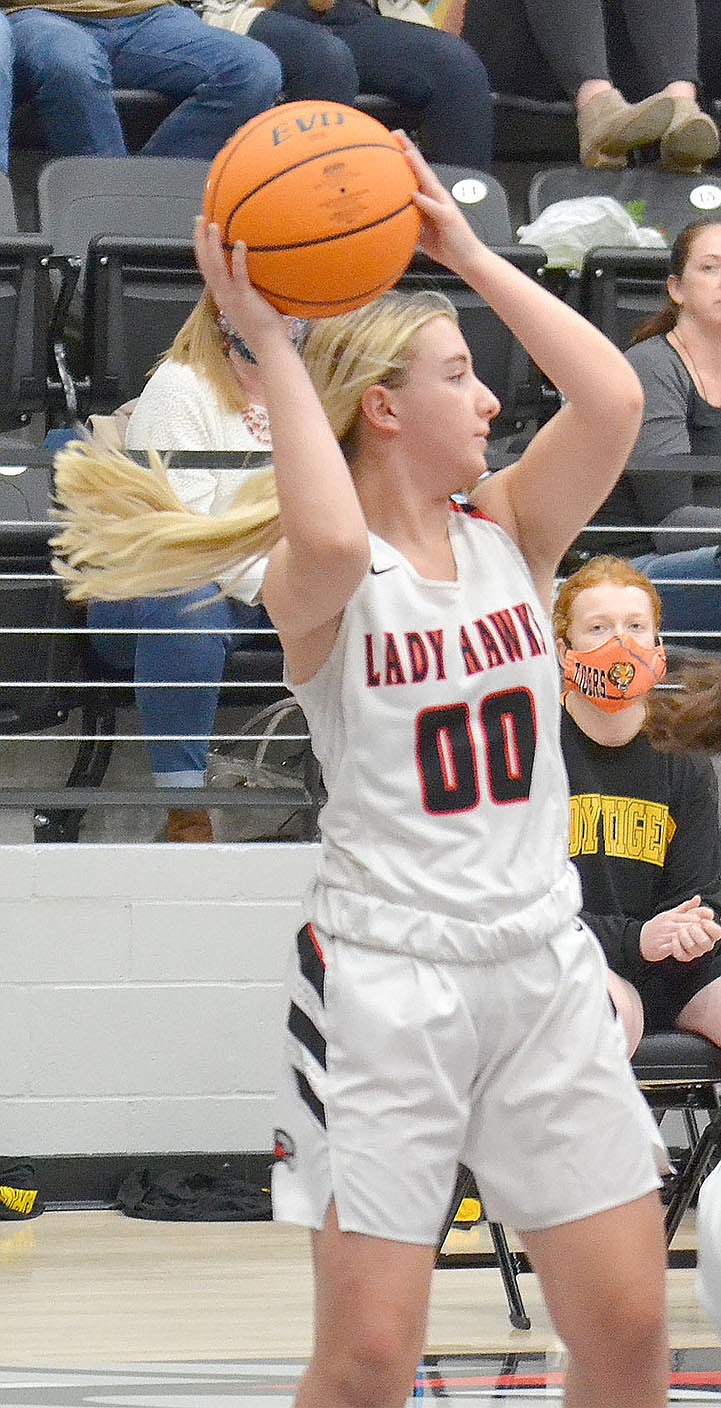 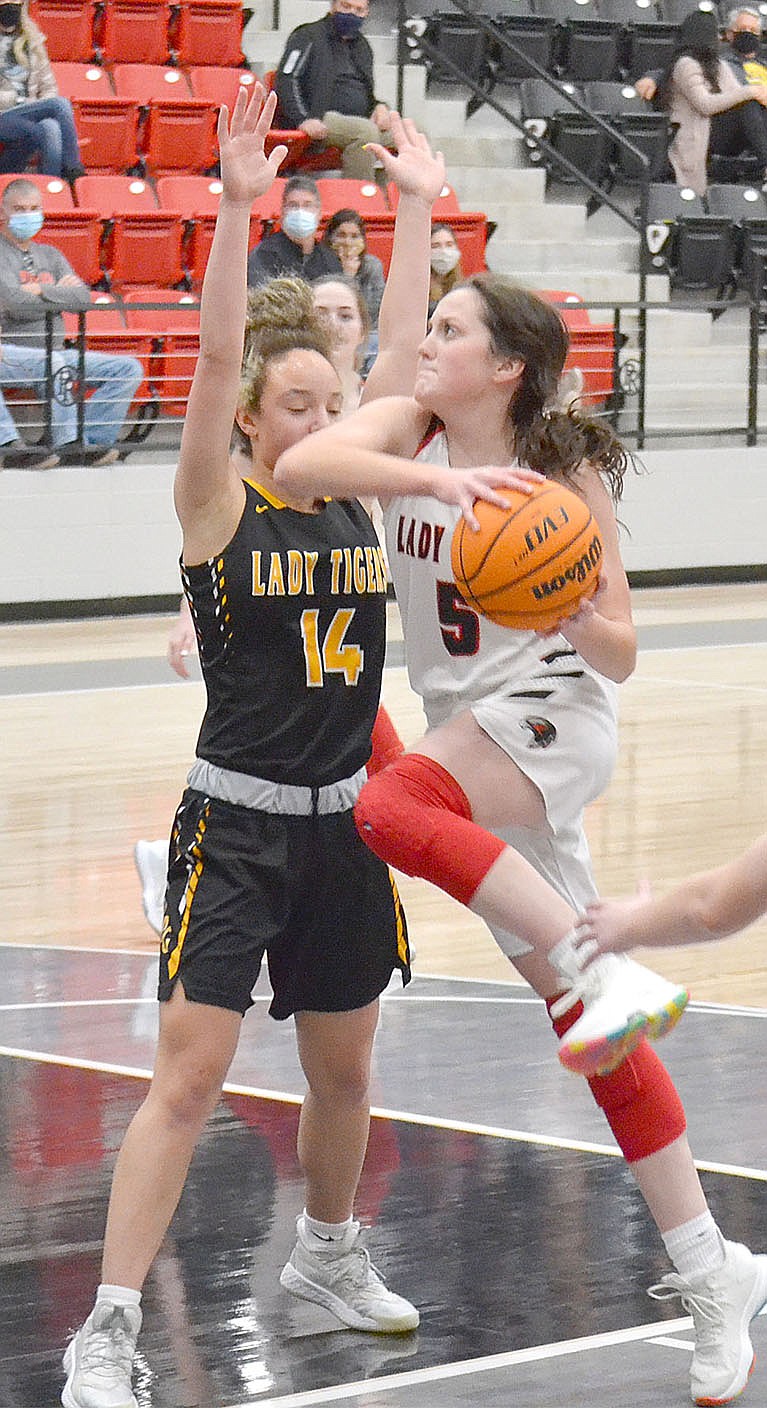 Senior Lady Blackhawk Aidan Dayberry, No. 5, goes up for a goal Friday, Jan. 8, 2021, in the contest against the Lady Tigers from Prairie Grove. 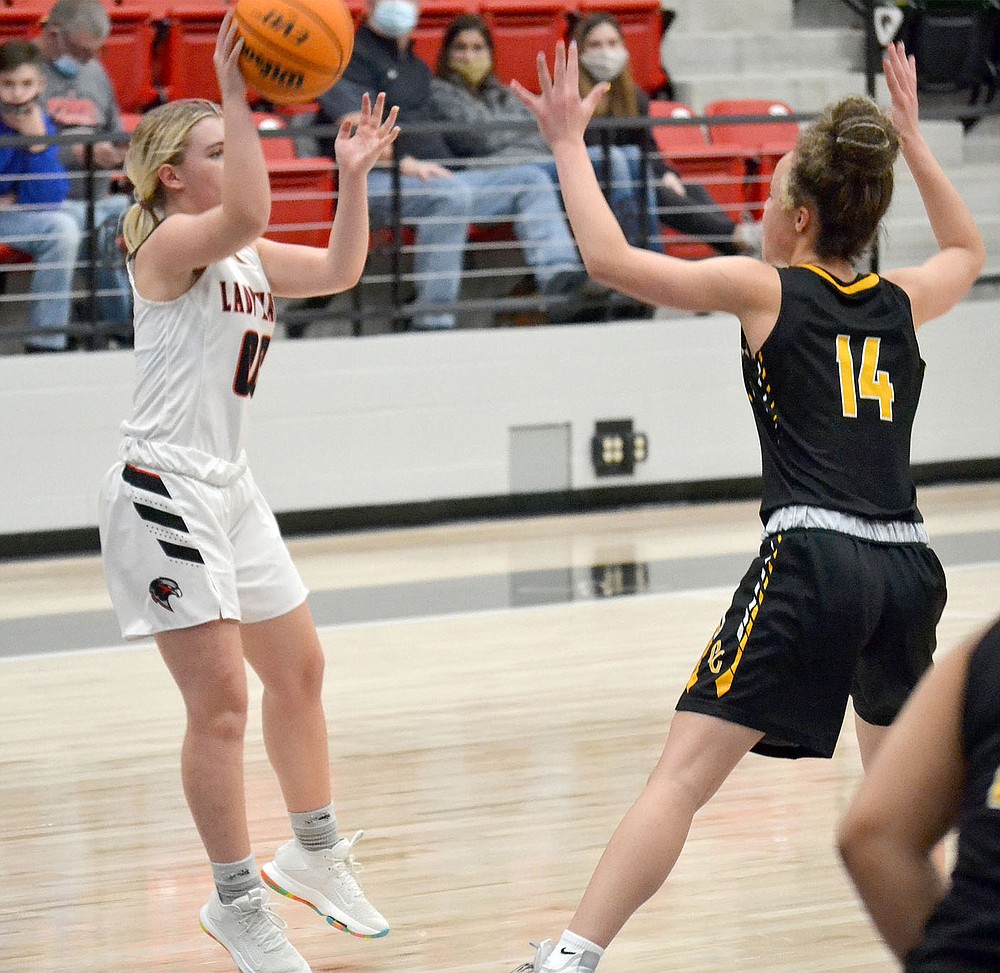 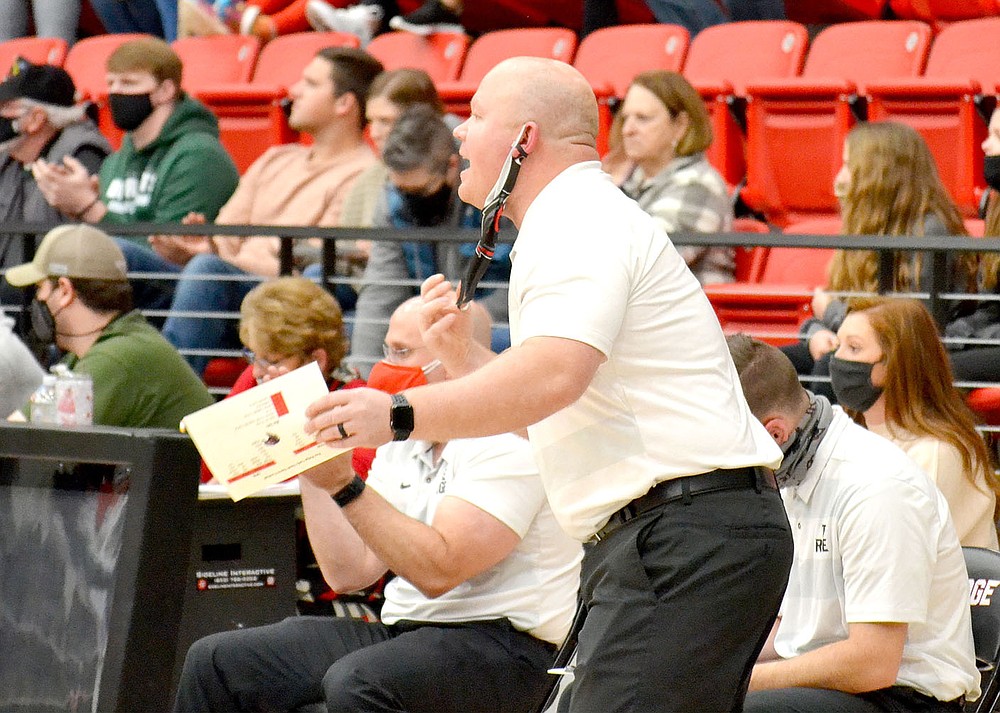 Heath Neal, head coach for the Lady Blackhawks, instructs his team as they battle the Lady Tigers from Prairie Grove in the first game in the new Blackhawk gym Friday, Jan. 8, 2021. 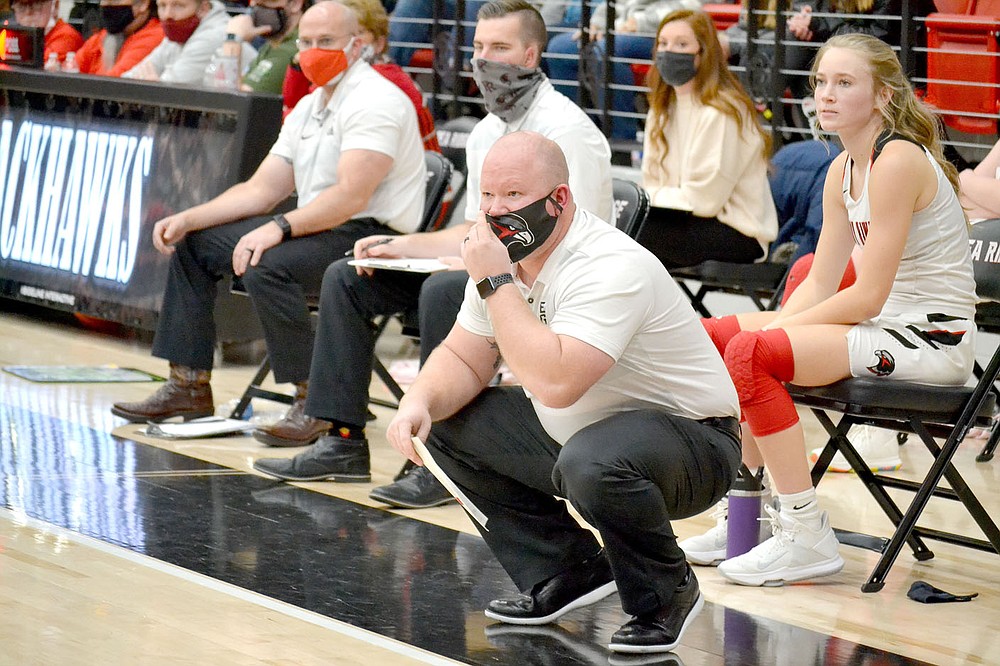 Heath Neal, head coach for the Lady Blackhawks, watches intensely as his team battles the Lady Tigers from Prairie Grove in the first game in the new Blackhawk gym Friday, Jan. 8, 2021. 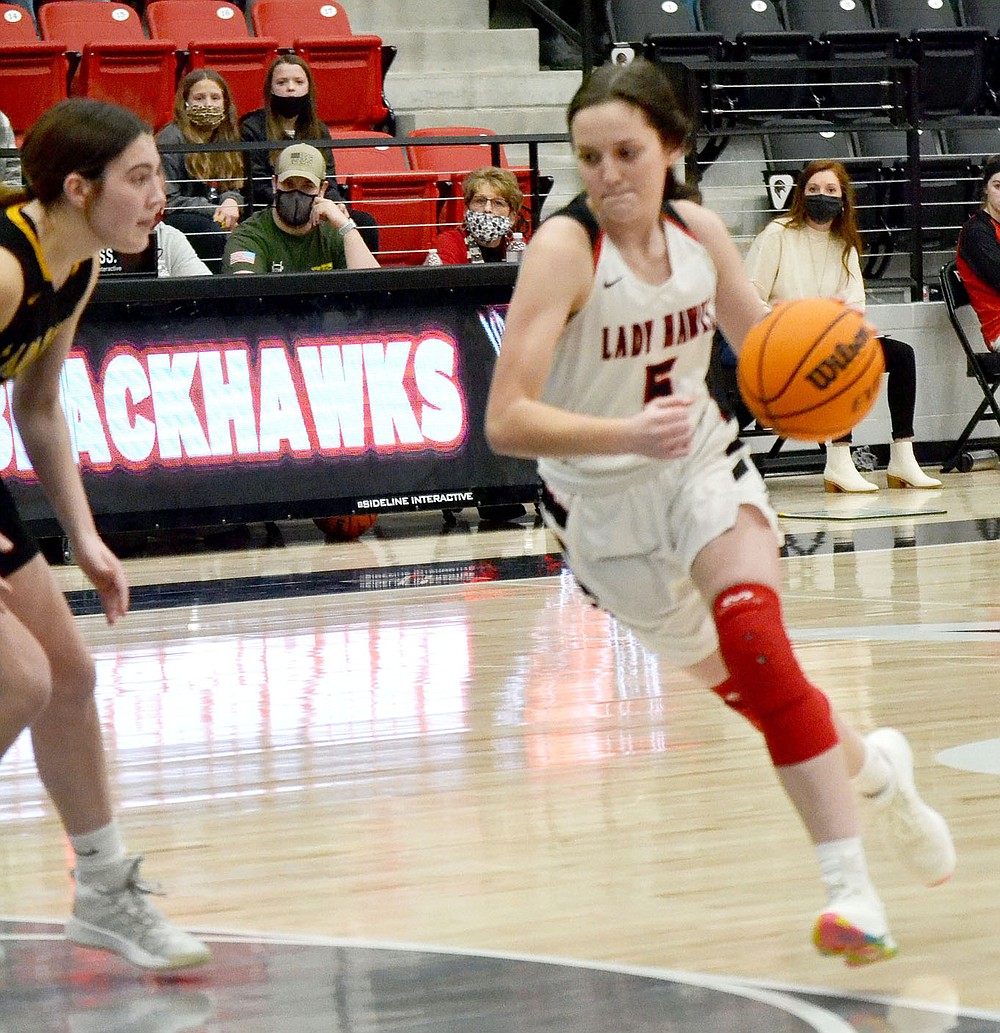