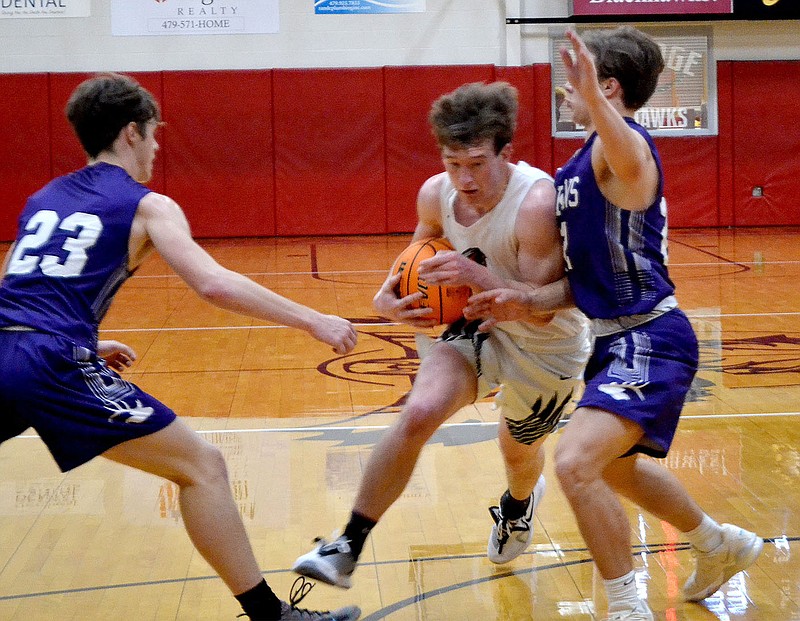 The Lady Blackhawks ended their 2020 basketball schedule on a high note, crushing the Elkins Elks 65-42, earning their 10th win on the season.

Meanwhile, the Hawk boys played with intensity but could not overcome the loss of two starters and ice cold shooting as the visiting Elks cruised past the home boys 51-33.

The conference season got into full swing last night as the Hawks visited Gravette. They will be at home this Friday hosting the Prairie Grove Tigers.

It was bombs away in the early going as the Lady Hawks jumped out to a huge first quarter lead and were never threatened for the duration of the contest. On defense, the Elks saw a blur of hands as dozens of their passes or shots were tipped or deflected by a swarming Blackhawk defense

The Hawks got rolling early with senior Blakelee Winn pitching the ball out to sharpshooter Bella Cates, junior, who nailed a corner shot to give Pea Ridge the early 3-0 lead. Over the next two minutes, the Hawk defense held the guests to but a single layup, while hot-handed senior Aidan Dayberry dropped three treys on the Elks as the hosts led 12-2 at the 5:00 minute mark.

The Hawk defense was overwhelming as the Elks had three straight turnovers with Winn hitting a charity toss during that time to increase the lead to 13-2. Right after that, the Hawks swarmed the Elks with defensive pressure as junior Lauren Wright swiped a pass then passed out to Cates who then returned the ball to Wright for a layup and 15-2 lead with 2:59 left.

Elkins then made their first trey to narrow the gap, but then senior Ravin Cawthon threw a pass inside to Winn who scored underneath, then moments later Winn took possession, threw to Wright who returned the pass to Winn who made the layup. Winn was fouled on the shot and made the freebie to boost the lead to 20-5 before the first quarter buzzer.

Dayberry still had the hot hand, drilling a 3-pointer to lead the second quarter scoring, and after a Elk layup, Cates ripped another trey as the Hawks threatened to bury the guests early, leading 26-7. At this point, Elkins regrouped and got a little offense going, scoring eight unanswered points to creep to within 13 at 28-15. Dayberry hit a 7-foot floater before the end of the half which was matched by a pair of Elkins free throws as Pea Ridge led 30-17 at the half.

Both offenses got rolling in the third with Pea Ridge outscoring Elkins 15-6 in the first 6 minutes to take an imposing 46-23 lead. Dayberry got it started with a layup, followed by a Cates 3-ball, a Winn rebound score, a hook shot in close by Wright who followed that up with a 3-pointer, with senior Hayley West scoring in the paint to almost ice the game.

Freshman Leah Telgemeier made her presence known late in the quarter, scoring a free throw then pulling off a steal and driving in for a layup in the final second as Pea Ridge entered the final quarter up 50-30.

Winn started the fourth with a steal and layup, another layup with a shot behind the arc from Telgemeier to end any doubt with Pea Ridge leading 57-32 with six minutes left in the game. Cates hit her fourth trey with Winn adding a free throw to surpass the 60 mark with 61 points. Elkins managed but a layup during that time though a 3-pointer by the guests and two free shots brought the score closer at 61-39.

Telgemeier hit another trey with Wright adding a free toss before game's end with a 3-pointer by the visitors just before the end left the score at 65-42.

Dayberry had 17 to lead the scoring with Winn having 15. Cates had 12, dropping a trey in each quarter, Wright collected 12, Telgemeier had 9, and West 2.

The Hawks and Elks battled on even terms in the first half, but a Nordic ice-cold third quarter saw the Hawks miss all their shooting attempts from the field, with only a pair of free throws to account for their scoring. With multiple starters out with cautionary quarantines and with the team just back from a team hiatus for the same cause, the Hawks fought well until fatigue blunted their best efforts.

Elkins scored first but a Jared Brewer and a Trey Reed trey tied the score at 5-5 midway in the first, with the teams tied five times and leads changing hands as many times in a briskly fought first half.

Brewer hit another shot to put Pea Ridge head 7-5, but a trey and layup sent the Elks back ahead 10-7. Brewer then tied it back up at 10-10 with a deep shot. The Elks then made a trey to get back ahead but Brewer hit another trey to tie it again at 13-13 with 2 minutes to go in the quarter. Brewer then dropped in a layup to give Pea Ridge the lead, but an Elks layup in the last minute sent the teams to the second period tied at 15-all.

The Elks shot through a trey to get ahead to start the second, but two buckets by Samual Tillman put Pea Ridge back on top 19-18. Elkins scored to get back a lead, then Bric Cates hit a 5-foot layup floater to regain the Hawk lead at 21-20.. The Elks then scored twice in close and a layup by Joe Adams got the Hawks within one at 24-23 at the intermission buzzer,

The third quarter was a disaster with the Elks racking up 16 points with the Hawks' only points coming by way of Reed's two free throws as the Hawks were in a deep hole headed into the fourth quarter, trailing 40-25.

Cates broke the drought with a bucket to begin the fourth but the Elks answered back with a trey and rebound score to lead 45-27 with 5 minutes left in the game.

Will Anderson tossed in a pair of 3-pointers in the game's waning moments but the Elks matched it with four free throws and a layup as the guests came away with the final victory. 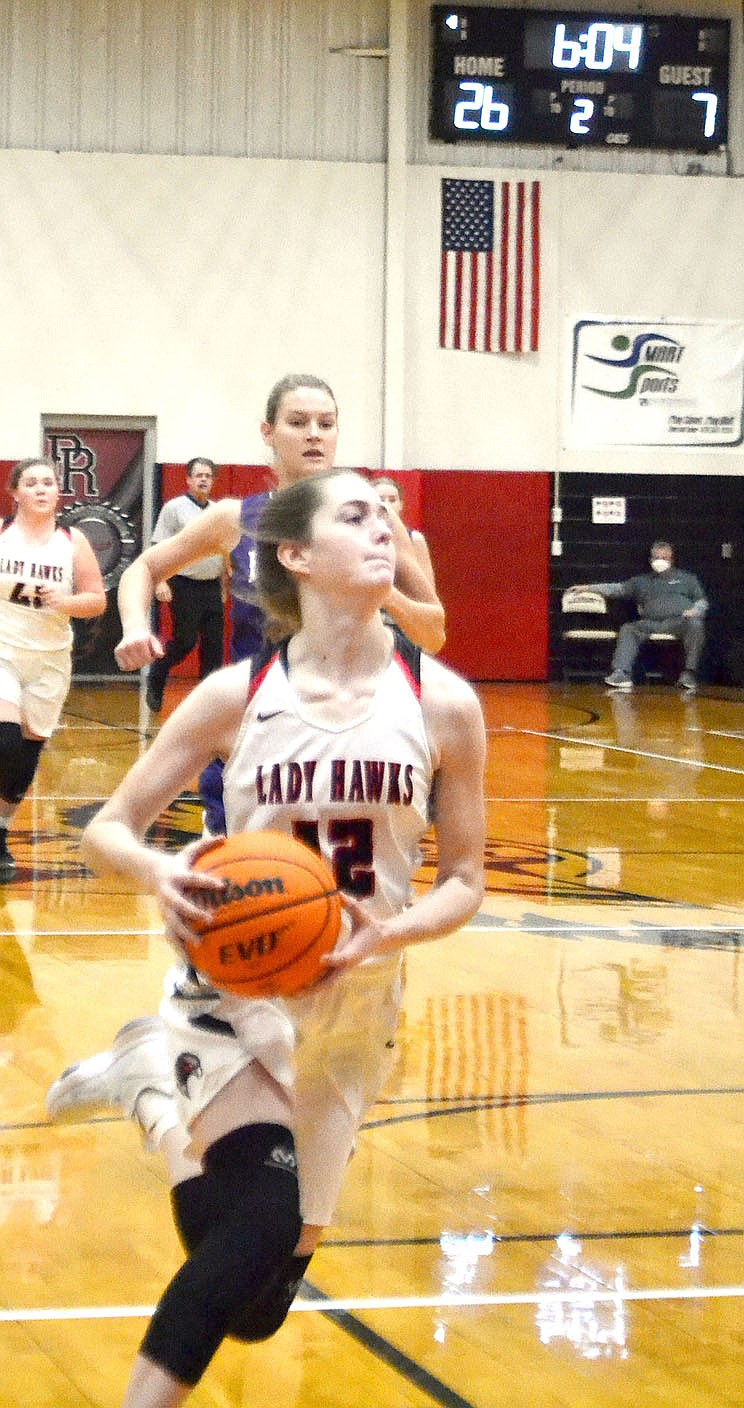 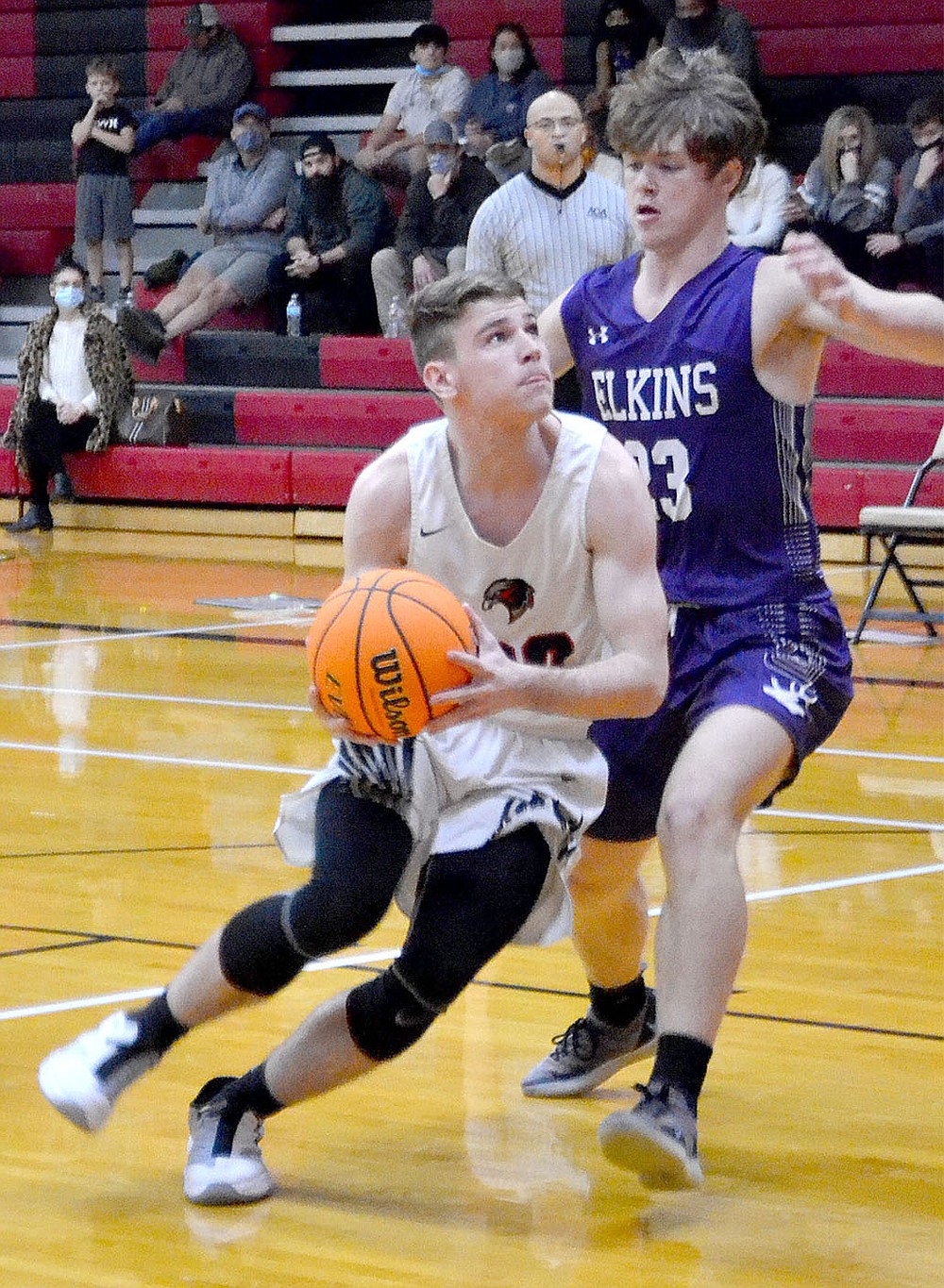 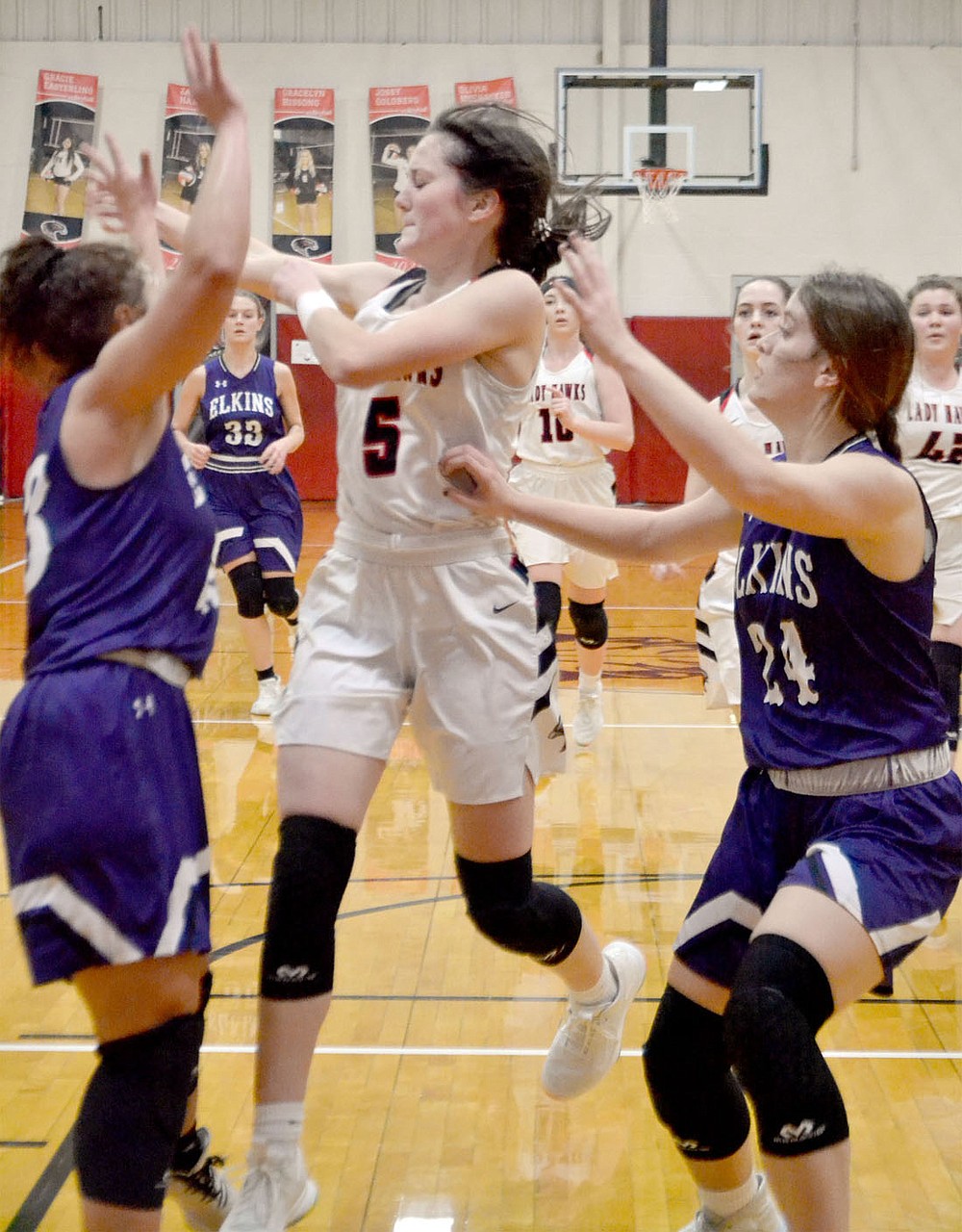 Senior Lady Blackhawk Aidan Dayberry (No. 5) was heavily defended as she passed the ball to a team mate during the game against the Lady Elks. 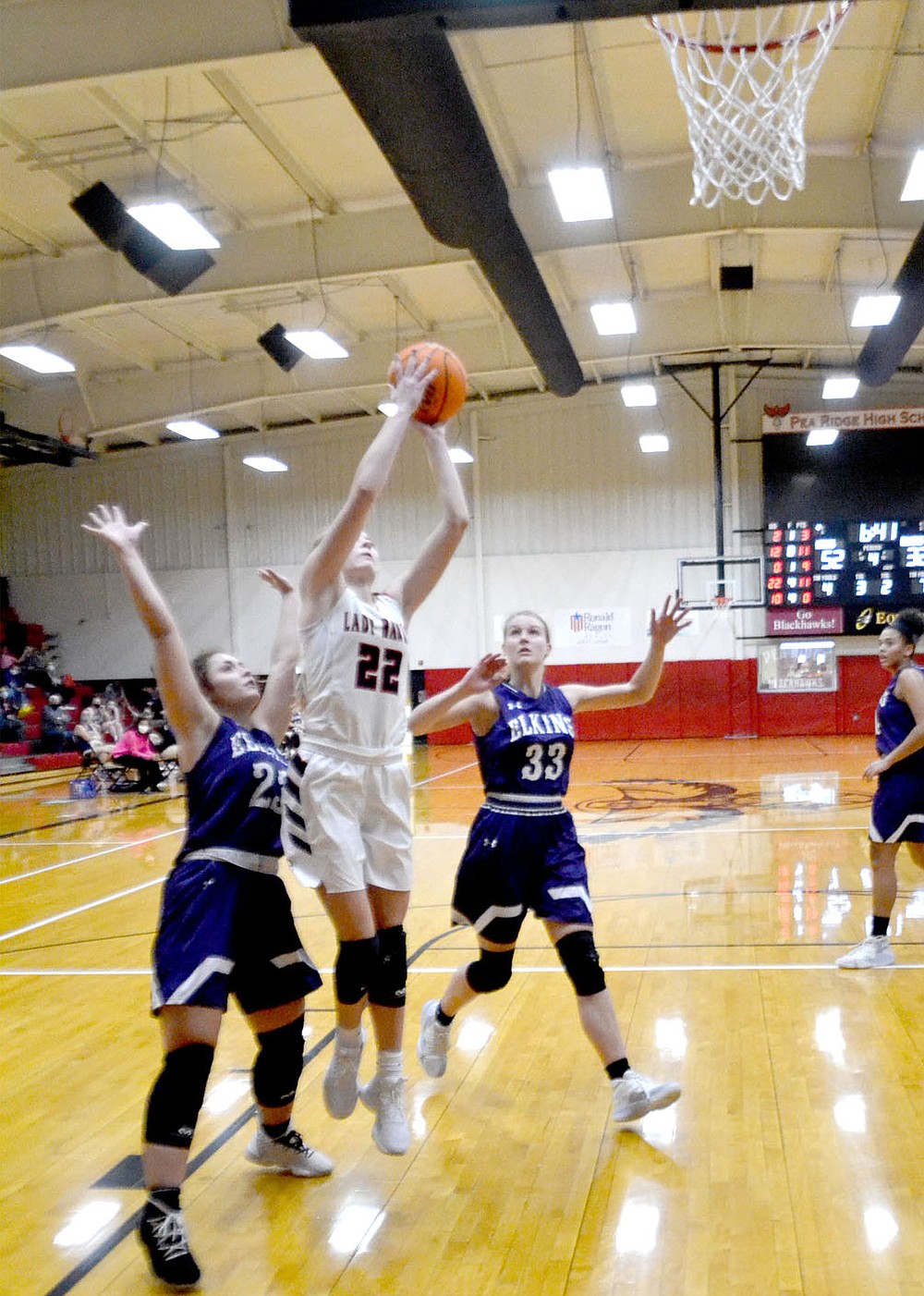 Senior Lady Blackhawk Blakelee Winn (No. 22) made a layup after catching the rebound from a missed layup by a team mate. 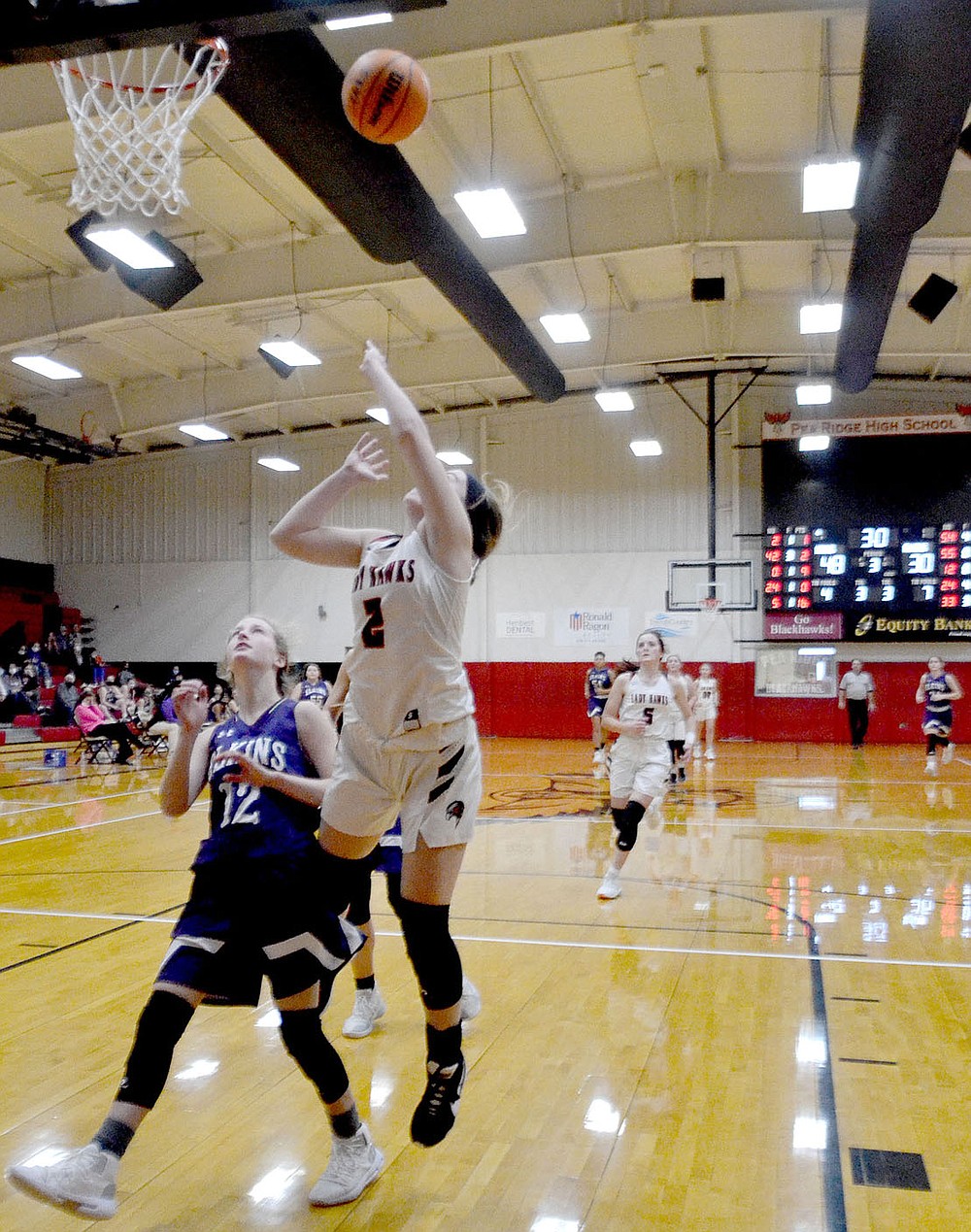 In the waning seconds of the third quarter, freshman Lady Blackhawk Leah Telgemeier went in for a layup in the contest against the Lady Elks.

Junior Lady Blackhawk Lauren Wright (No. 12) went up for a goal 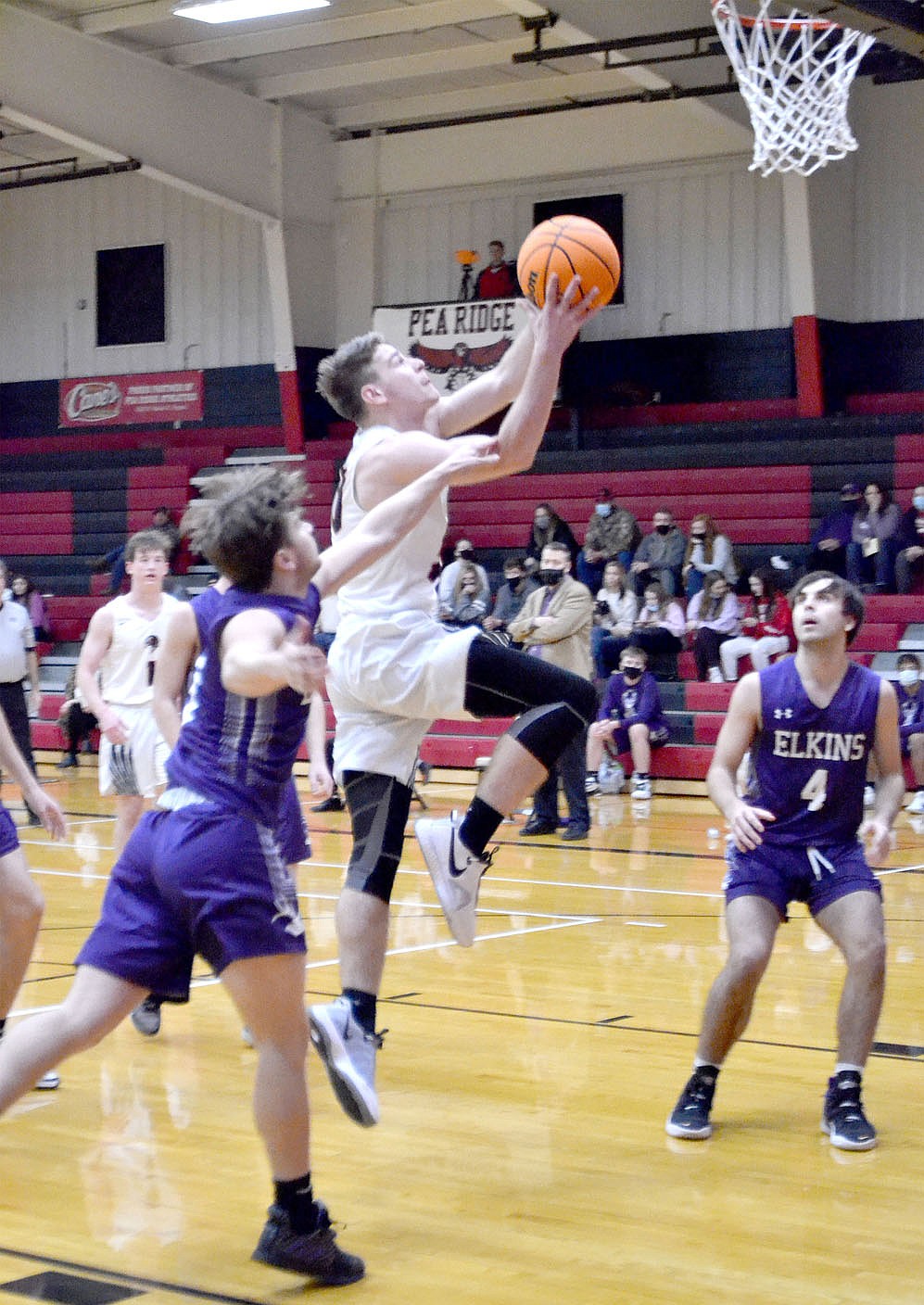 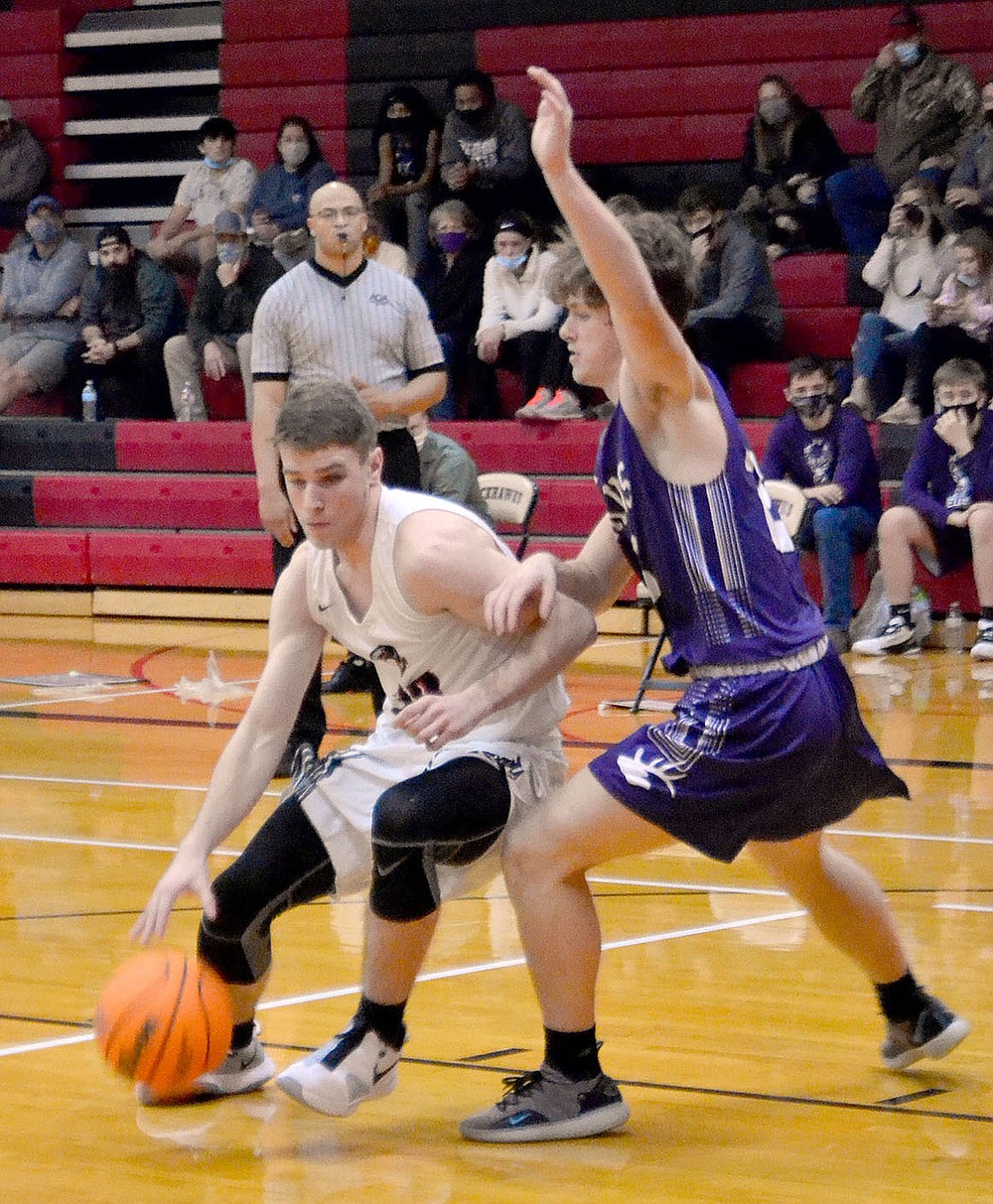 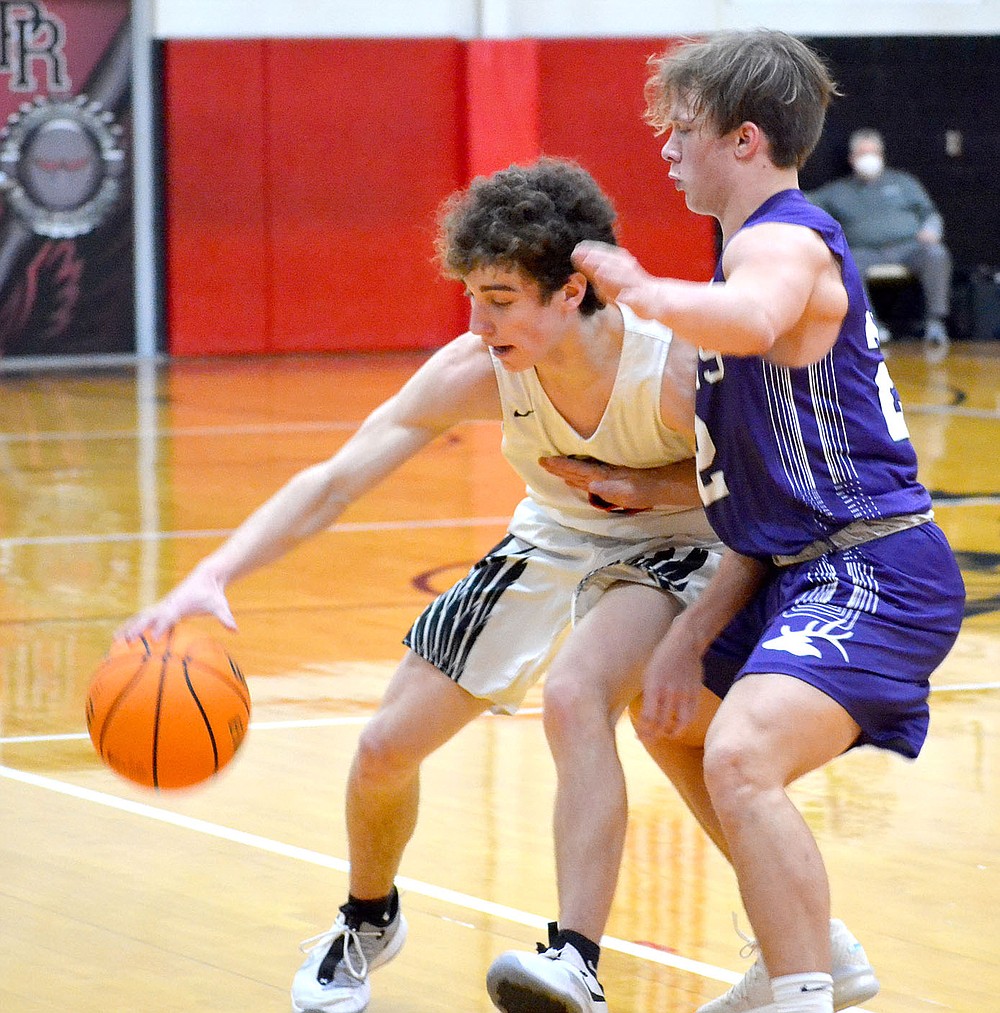 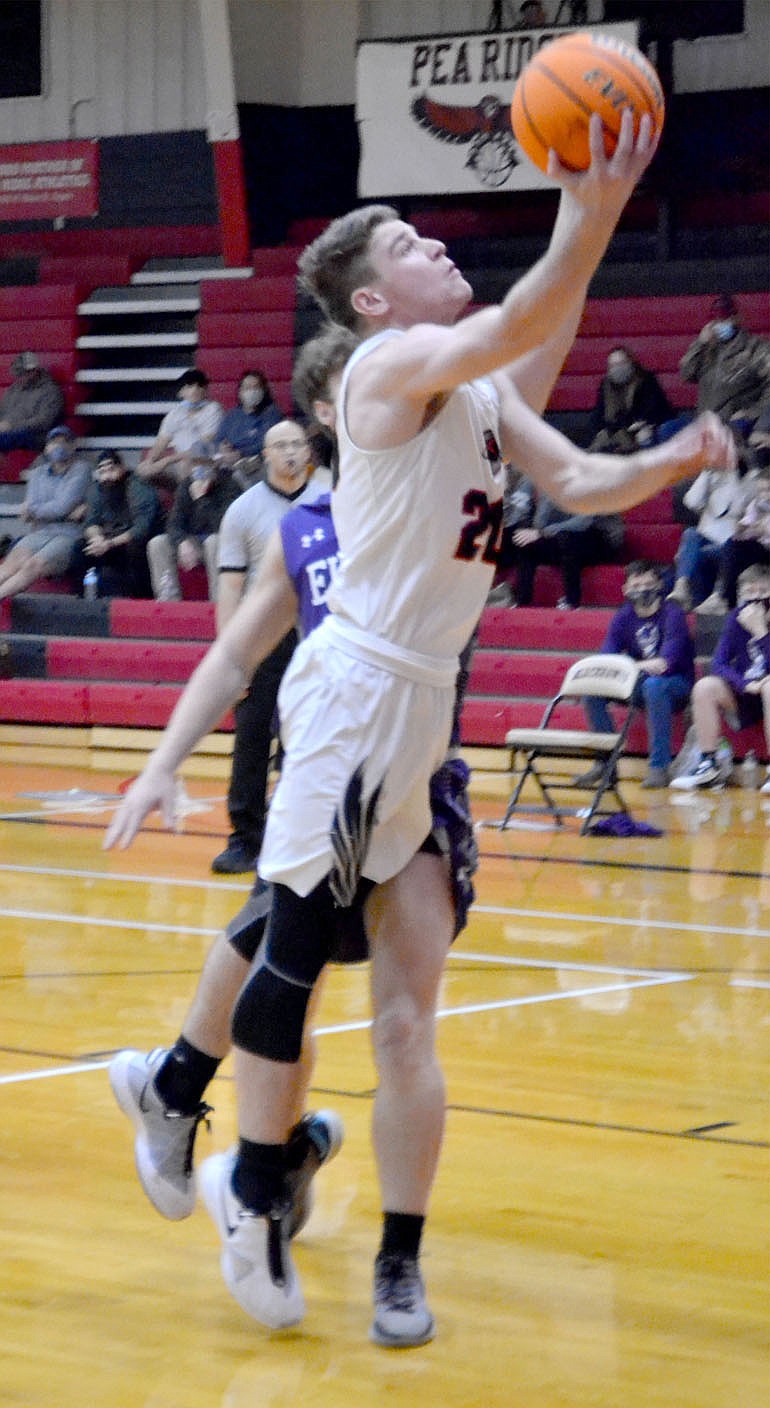 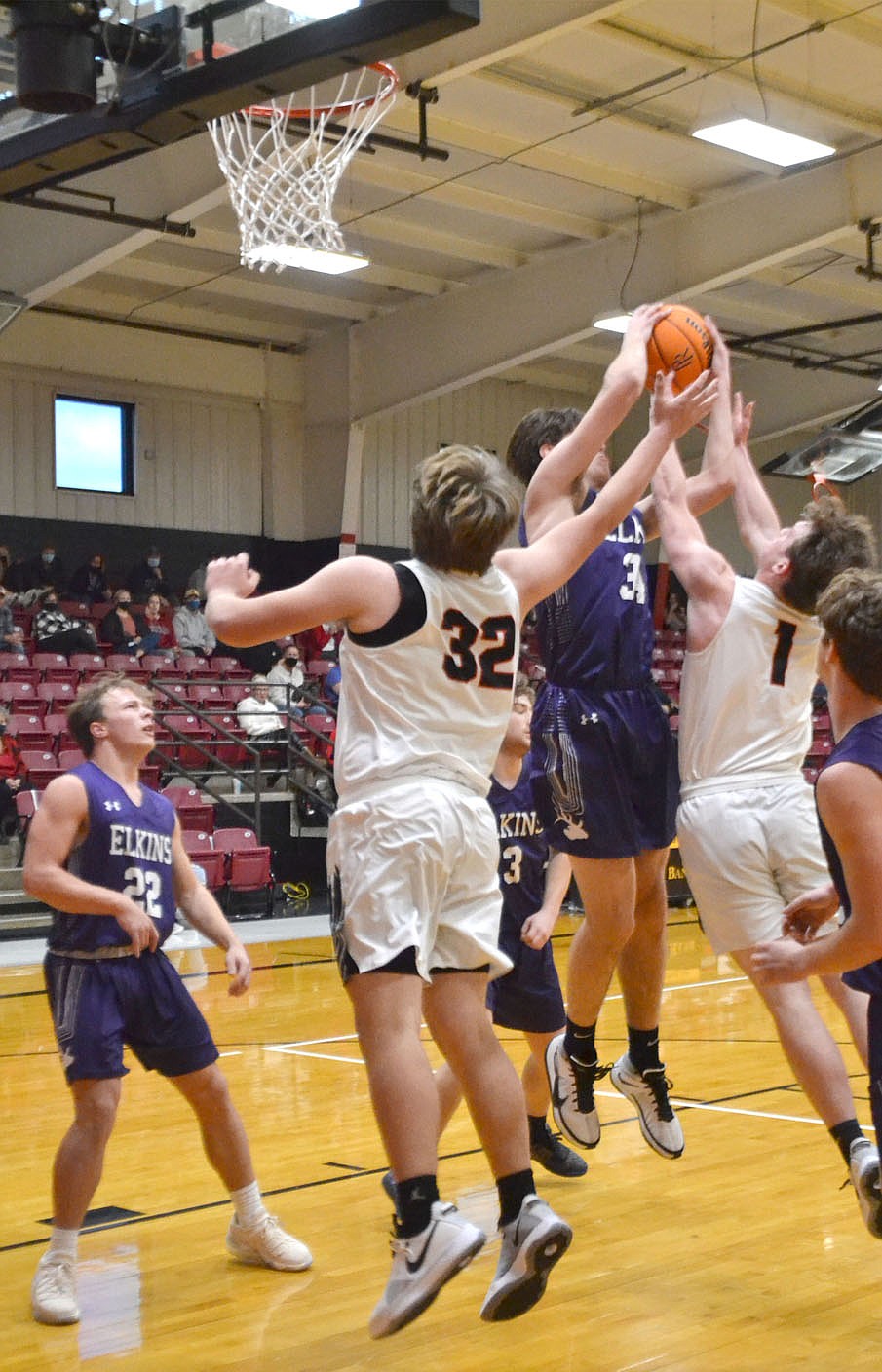 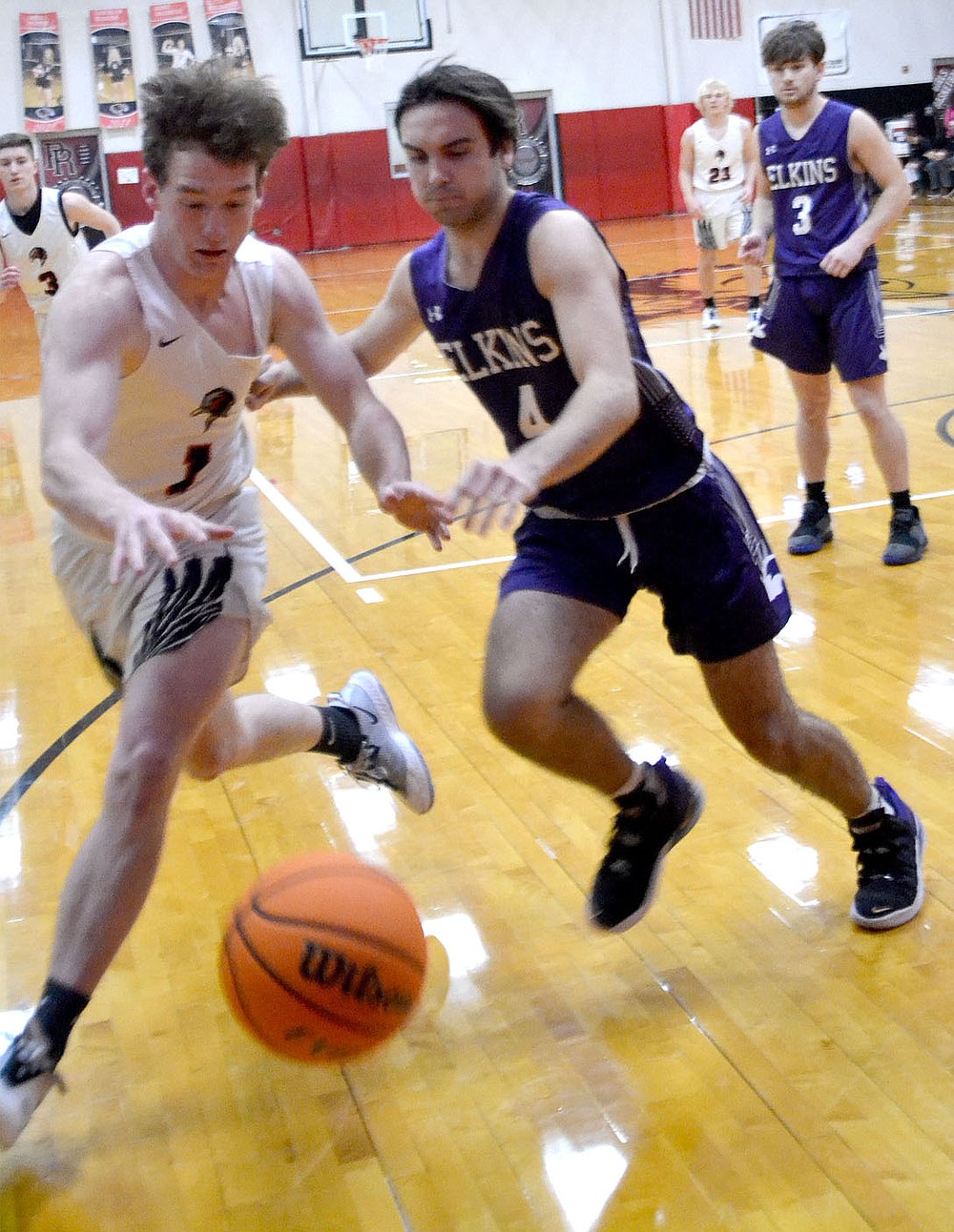 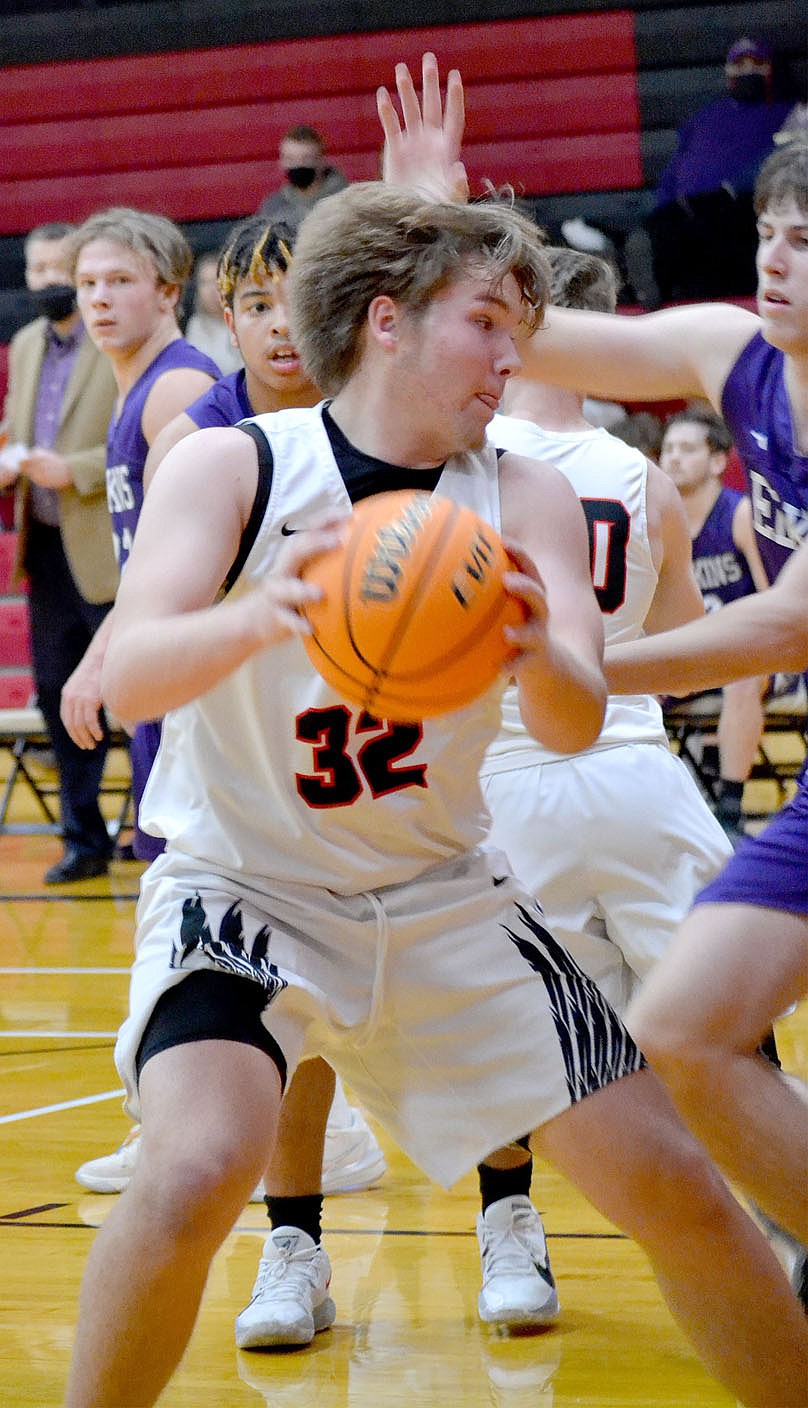 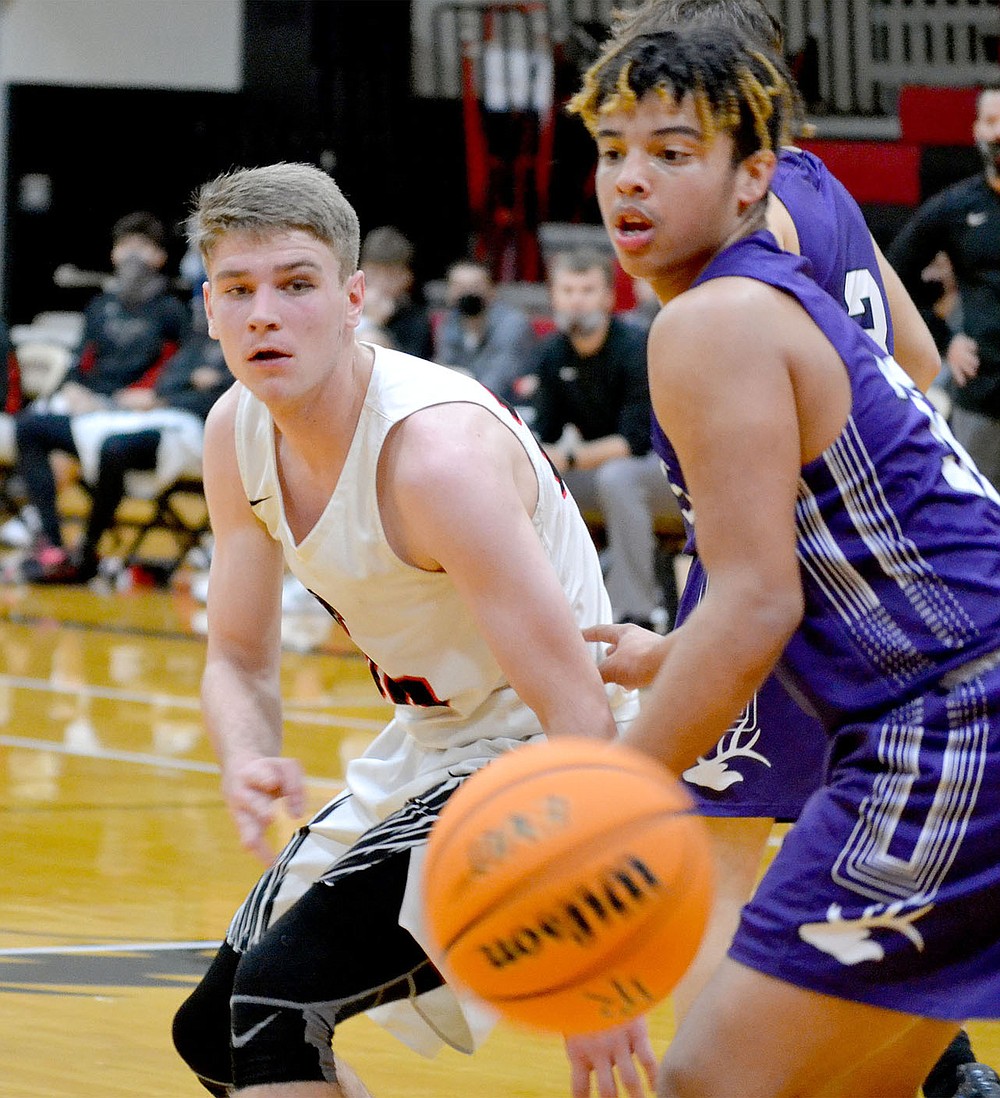 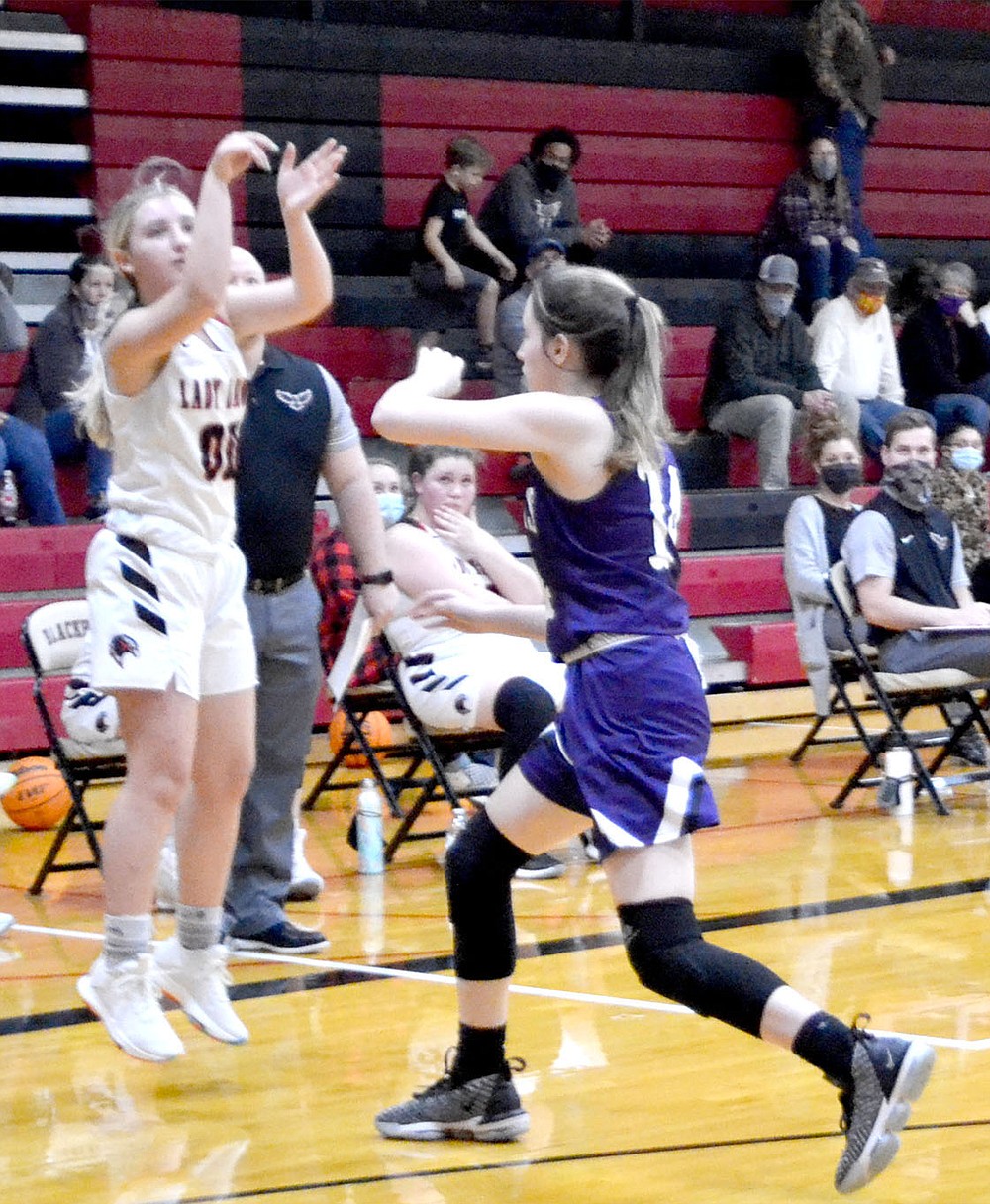 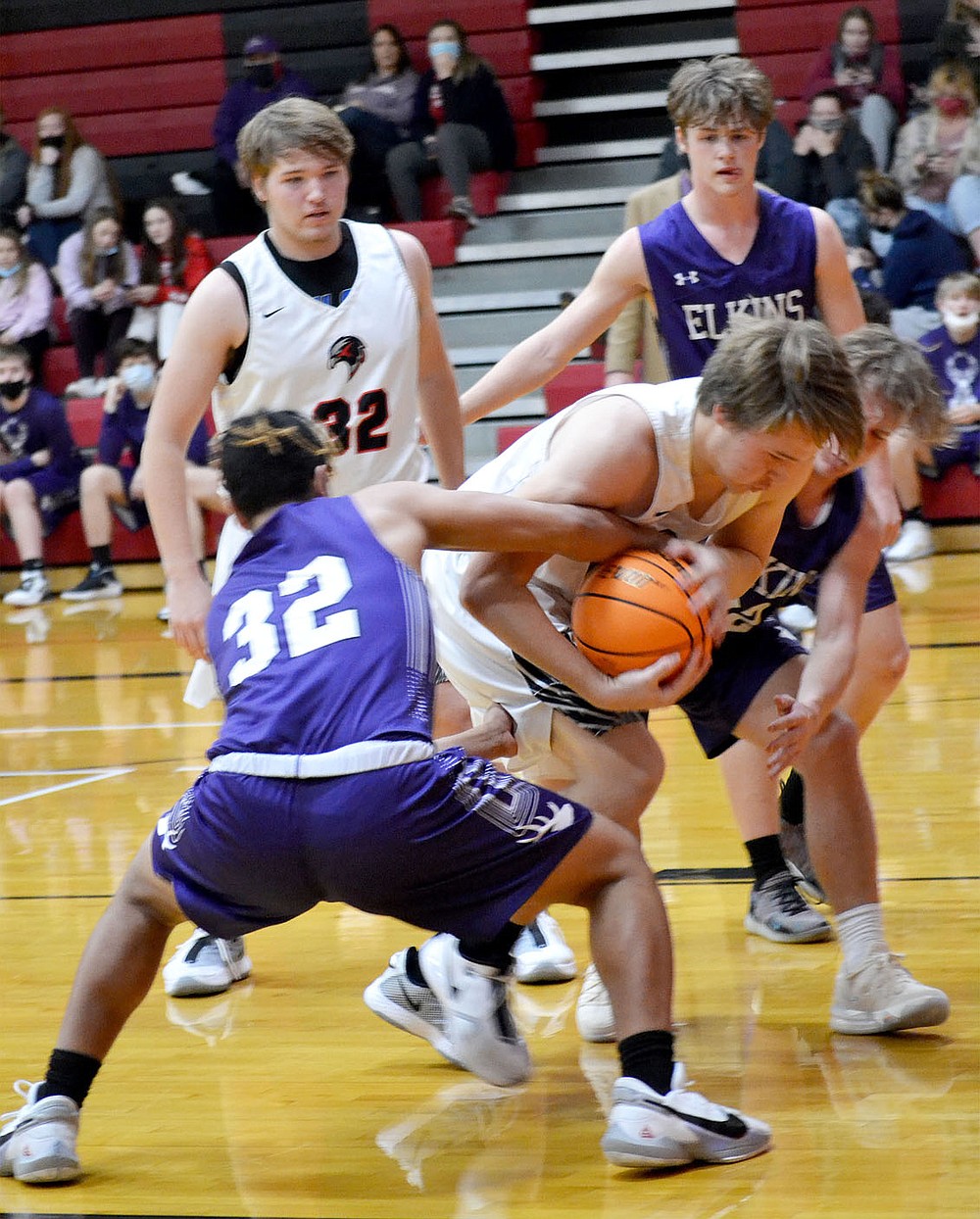