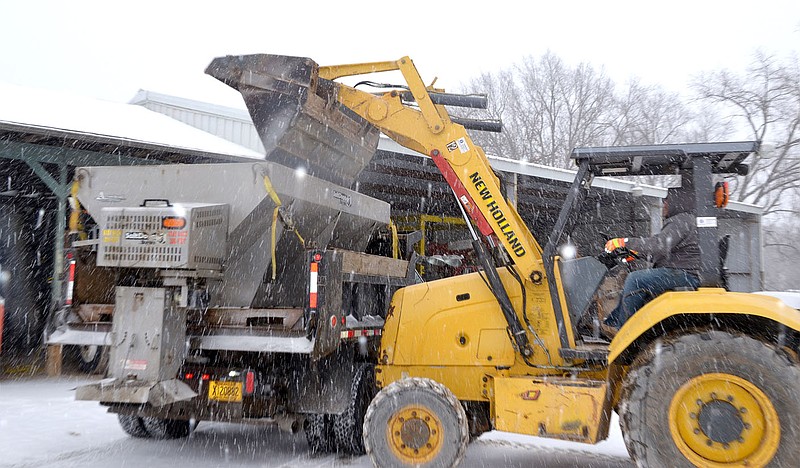 They got off work at 5 a.m. Monday after working to clear the streets of the city all night. A bit of sleep and they were back at work by 11 a.m.

The employees of the Pea Ridge Street Department have worked tirelessly through this recent winter storm.

"We have a great group of guys," See said. "I have talked to multiple agencies in the last couple of days -- they've all had issues. We haven't had any issues."

Clark said they watch the weather reports from the Tulsa office of the National Weather Service "to see when it will come in" -- referring to ice and snow. Based on the forecast, decisions are made whether to pre-treat the roads or to just use "straight salt and sand." He explained that using a salt-water mixture on the roads helps melt ice and snow as long as the temperatures are not below 27 degrees.

"We're being proactive rather than reactive," See said. "The responsibilities have changed because of the need to be in front of the storm, to get snow off roadways. The theory back then was traffic on it might help. That perspective changed. Now, we realize if we can take it off a layer at a time even while it's snowing, we can reduce the volume. That's the attitude that's changed in last 10 years."

"We're constantly out -- we have to stay on top of it," See said. "We'll utilize every piece of equipment we have for this storm."

There are two trucks with blades and "salt-dogs" or hoppers that carry the sand and salt mixture spread on the roadways to provide traction.

"We started Tuesday (Feb. 9) at 7:30 p.m." Clark said. "We sent out two trucks with pre-treatment but came back in real quickly when we realized we would use everything we had and wouldn't be able to make more."

"When we go out, we first hit the priority roads -- the main streets -- downtown, Highways 94 and 72, Lee Town Road and It'll Do Road," See said. "We want to be sure main roads are cleared."

He said the usually work the driveway and roads near the Fire Department and Police Department to ensure emergency personnel can get out for emergencies.

"Then, we hit the secondary roads, then side roads and subdivisions," See explained.

The type of winter precipitation determines the treatment of the roadways as it is not possible to "blade" ice. And, See explained, if pre-treatment is applied, but it rains, it washes it off the pavement before it can do any good.

"If it's straight snow, we use the big truck and snow plow," See said.

See said his department also has new radios to be able to stay in communication with Benton County Central Communications, the police and fire personnel.

"With this type of storm, we may have power outages," he said.

See said the employees ride two in each truck in case they get stuck or stranded. The first night, they worked until 12:30 a.m., went home to nap, and returned by 6 a.m.

"With not having a vast number of employees, we'll all come in and work until it's done. We will try to alternate shifts," See said. "It's unsafe to have only one person in a truck in case something happens because our terrain around here can be treacherous."

"Be smart. Be safe. We want to go home the same way we came to work. Everybody has families," he said, adding that the employees' families sacrifice with the dedication to the job. "It's not just the employees dedicated to their jobs. When it comes to an event like this, the kids want to go sledding. It takes away from family time."

"The State did a phenomenal job," See said about the ice storm last week. "Highways 72 and 62 are the priorities for State."

"We need people to stay off road if possible, park cars in driveway and NOT on street," See said. "Please put basketball goals down so they aren't blowing into streets."

"Be patient, you gotta give us time. It won't take place in an hour," Clark said.

"We've had a lot of positive feedback from the community -- it helps, knowing people are appreciative," See said. "That goes a long way for me, for the guys."

"It's nice to know people got our backs," Clark said. 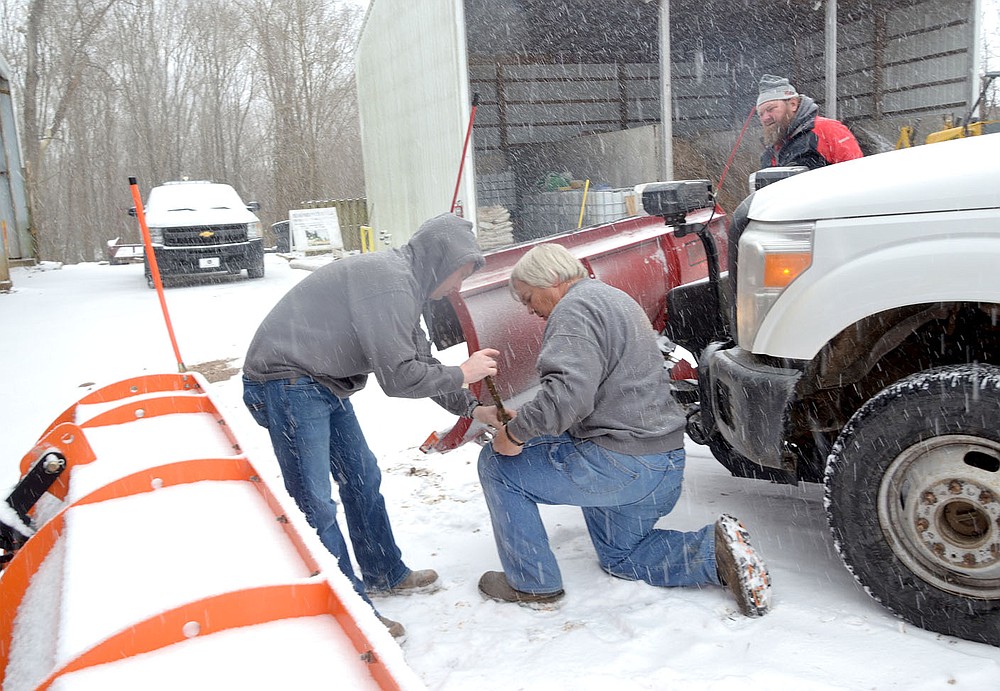 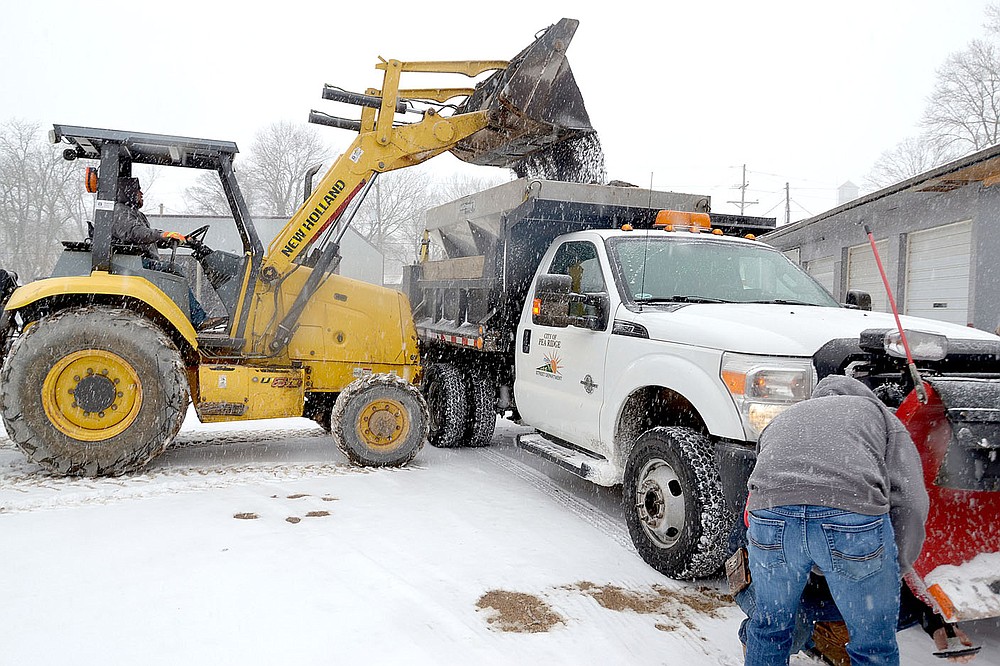 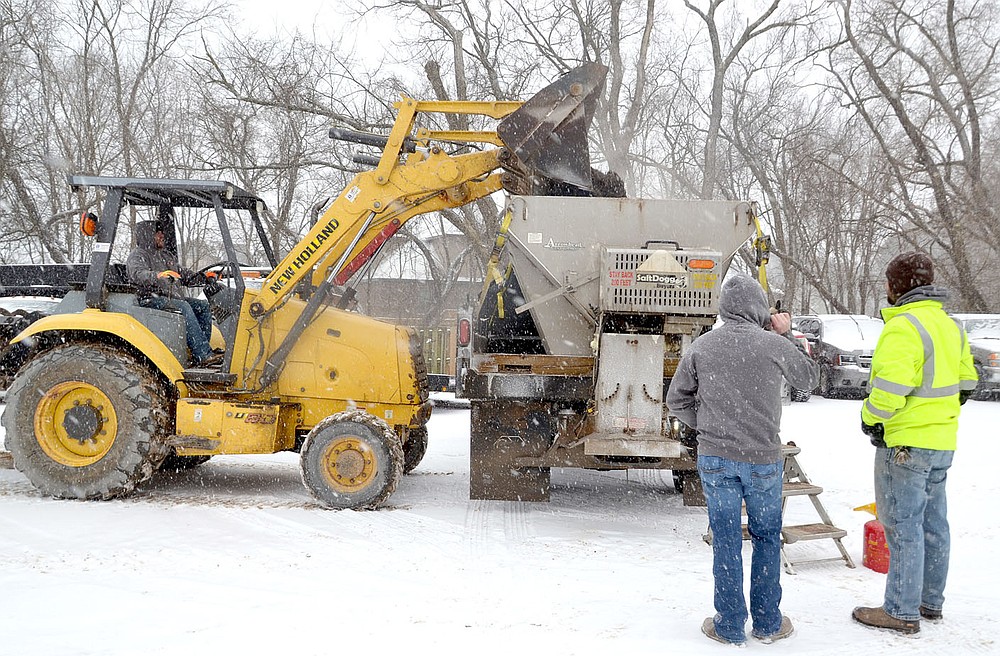