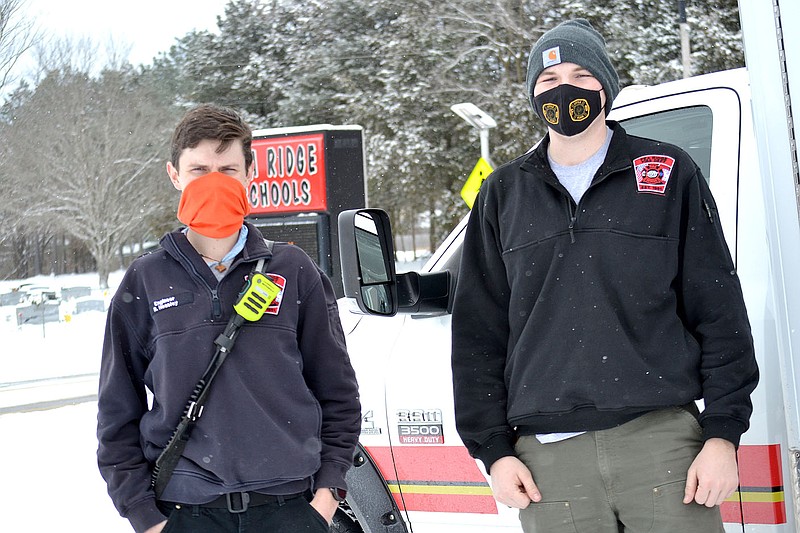 TIMES photograph by Annette Beard Pea Ridge Fire Department firefighters Riley Heasley and Caleb Light spent the night in the warming station at the Pea Ridge Middle School to provide assistance to any who might need a warm, safe place to stay during the natural outage in Pea Ridge Tuesday night.

The process to restore natural gas services to area residents was well under way by noon Wednesday as technicians from Black Hills Energy went door to door checking lines, turning on meters and relighting pilot lights.

City and school officials provided a shelter at the Middle School gym for Tuesday night. No one used the shelter, according to city officials.

"The shelter will remain open and heated until city officials receive confirmation that everyone's heat has been restored," Police Lt. Michael Lisenbee said, adding that some natural gas customers may not be home during the day and may not have their service restored.

Tom Sheets, with the Pea Ridge Street Department, said it got about 59 degrees inside his house without the natural gas heat.

"We learned that a lot of the heat is getting restored," Lisenbee said Wednesday morning. "If heat's getting restored, nobody's going to come here so we shifted our priorities -- we've got all this food and all this water; some of the food is perishable -- bananas and oranges," Lisenbee said. "We decided to make packages up and we're going to get them to families the school district knows are in need. We're going to take to 24 families."

"Now that they have heat restored, they're probably cooped up in their homes because of all the snow accumulation that came in last night," Lisenbee said. "Let us bring the stuff to you."

"I'm really astonished that nobody came at all but I think it has to do with people hoping the gas would get restored last night," he said. "A lot of people probably didn't want to leave their homes, their pets and decided to tough it out."

According to a press release from Black Hills, "When a technician arrives to restore service, they will turn on the meter and then perform a variety of safety checks on gas appliances indoors, measuring for gas and carbon monoxide to identify any safety issues. Customers should not attempt to relight their appliances on their own. At locations where no one is home or the business is closed, a tag will be left on the door notifying the customer that the natural gas has been shut off and to call the company for it to be turned back on. Additionally, someone over 18 years of age is required to be present during the relighting process, so customers can also help by being in the residence today if possible."

Police and Fire Department personnel spent the night at the shelter to provide assistance to any who need it. Tuesday night, Mayor Jackie Crabtree provided a list of hotels in Bentonville that offered reduced rates for persons without heat in their homes.

"We actually had people calling to offer to pay for a hotel room for people who didn't want to spend the night on a basketball court," Lisenbee said.

Food and supplies for as many as 500 people were donated for use in the warming station at Pea Ridge Middle School Tuesday evening. There were bottles of water, blankets, tissue, as well as the food.

"Now that they have heat restored, they're probably cooped up in their homes because of all the snow accumulation that came in last night," Lisenbee said. "Let us bring the stuff to you."

"It's really important to us that the food that was donated by Sheep Dog, Walmart, First Baptist Church of Pea Ridge is actually going to people who are in need," he said.

"One thing that is astonishing is how quickly all this got pulled together," Lisenbee said, explaining that he made two phone calls and within a few hours had enough supplies for as many as 500 people. "Everybody really stepped up to the call!" 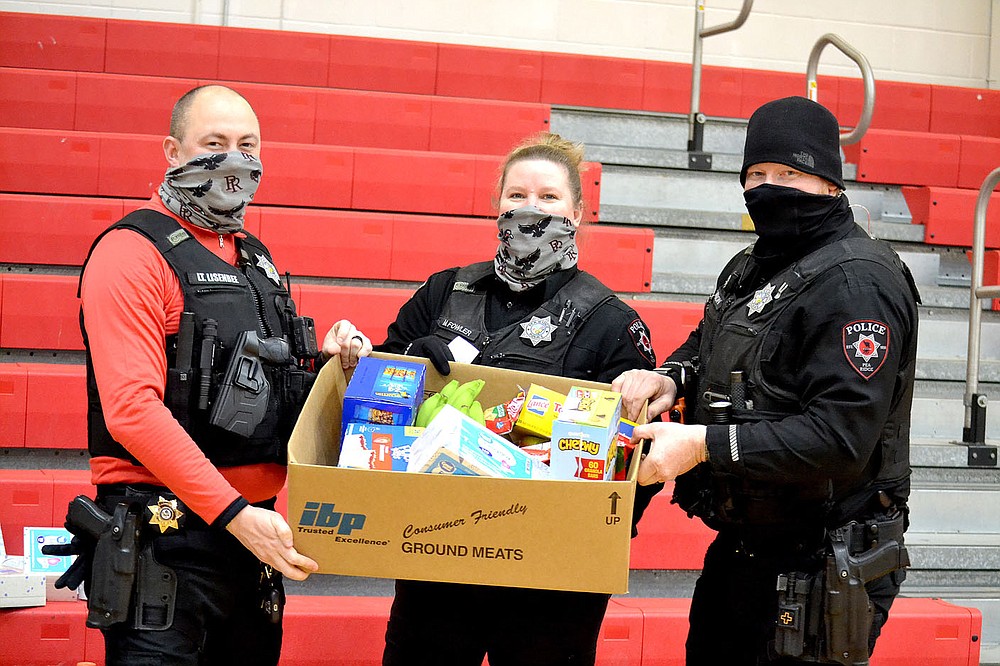 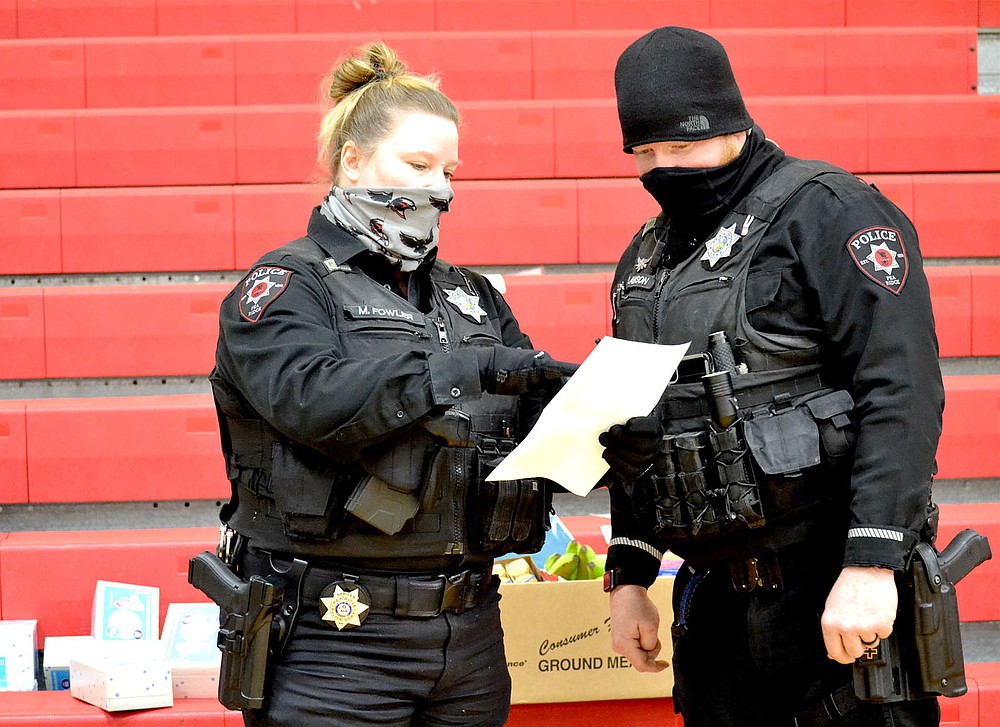 Pea Ridge Police officers Mindy Fowler and Justin Lawson check off a list of supplies for families during the natural gas outage in Pea Ridge Wednesday, Feb. 17, 2021. Supplies gathered for the warming station were delivered to families in need Wednesday by police officers.
ADVERTISEMENT