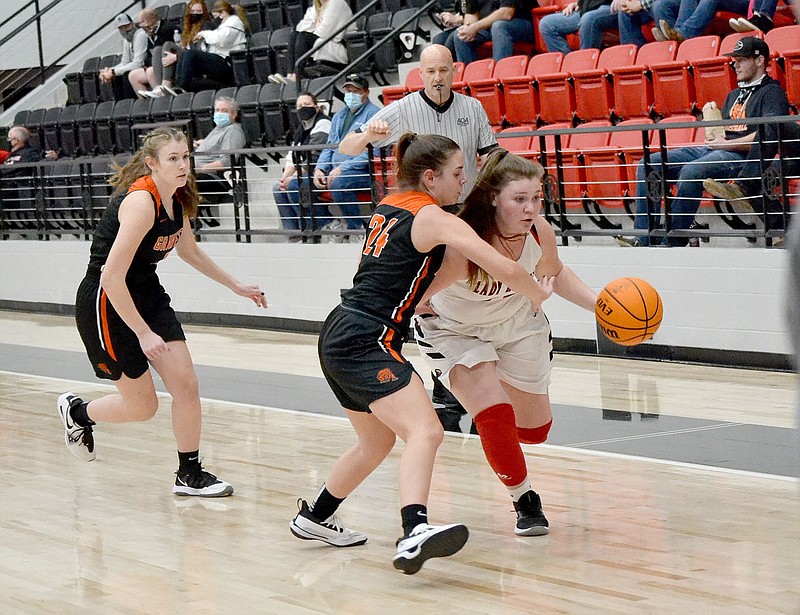 PEA RIDGE — ​The Blackhawk boys and girls cagers had a good week on the hardwoods, taking three of four games against cross-county rivals Gravette and Gentry. The girls swept both of their games, beating Gravette 51-40 Tuesday before taking down Gentry 52-40 Friday. The boys split their games, crushing Gentry 57-26 Friday after losing a close heartbreaker 41-36 on Tuesday.

This week is the final one for the regular season.

The Hawks were to travel to Prairie Grove Tuesday before coming home to finish the conference schedule hosting arch-rival Farmington on Friday. If the girls took care of the Tigers Tuesday night, and if the Lady Cardinals did the same with Gentry, the girls game this Friday takes on significant meaning. The girls' winner will take the No. 1 seed from the West in next week’s 4A-1 District Tournament. Harrison has already clinched the 4A-East title.

Heath Neal’s Lady Hawks exploded on the visiting Lions last week, jumping out to an 11-2 lead over the first six minutes of the opening quarter.

West opened it up a bit when she nailed another trey to start the second quarter, and when junior Lauren Wright slashed through for a layup, the Hawks led 22-8, their biggest advantage. The guests reduced the lead moments later they converted a pair of free throws. The next play was likely the biggest defensive play of the game. The Lions picked off a pass and went in for an uncontested layup. The player missed and on the rebound shot, her shot was blocked by Dayberry who then regained possession for the Hawks.

The Lions tightened up things with a trey, dropping the lead to 24-16 but senior Blakelee Winn beat the defense with a layup to get the lead back to 10 at 26-16. Spears scored underneath in the closing moments of the half with a Gravette free throw leaving the score at the break 28-17.

A Hawk turnover led to a pair of free throws made by Gravette to get the lead back to single digits. Winn then spotted Dayberry open for a layup and when Winn dropped in her own layup moments later, the Hawks were back up by double digits at 32-19 with 5 minutes left in the third quarter.

Both teams traded scores for the rest of the period. Gravette hit a 10-footer, to which Winn responded with another layup. The Lions converted two of two free tosses, but Spears scored on a rebound. The visitors then sank a short jumper and a free throw shot with it to shrink the Hawk lead to 10 at 36-26. Spears then dropped in her own free toss which was matched by Gravette seconds later. Winn then hit the biggest shot of the quarter when her trey got the lead back up to 13 at 40-27. One short shot by Gravette just before the buzzer sent the teams into the fourth quarter with the Hawks up by 11.

The Hawks could not generate but a single goal by Winn in the first half of the fourth period, but the Lions were held to just three free throws.

Junior Bella Cates then put a serious hurt on the Lions’ faint comeback chances with a trey with a little over 3 minutes to go, giving Pea Ridge a 13-point lead again at 45-32. A Dayberry free throw gave the Hawks their biggest lead ever at 46-32 with less than a minute left.

The Lions would not quit, hitting a trey, then after Winn sank a free toss, the guests buried a layup to get the lead down to 10 with 40 seconds left. Cates was fouled immediately after the Lion score, but she defeated that strategy by hitting both shots to get the Hawks back up by 12 with 35 seconds left. The Lions would hit a short jumper, then after a Hawk turnover, the Lions picked up two free throws to cut the lead to 8 with 15 seconds left. The last score was a Hawk free throw that set the final margin at 50-41.

The game Tuesday was a hard-fought see-saw of a battle that saw the lead change hands through the contest, but late turnovers by the Hawks and good free-throw shooting by the guests proved to be the difference.

Gravette jumped ahead 4-0 in the first period, with senior Malik Bagsby nailing a trey to tighten the lead to 4-3. Gravette then scored in the lane, but Bagsby scored on a rebound shot, then junior Jared Brewer ripped a trey to put the Hawks into the lead at 8-6. The teams then suffered a series of turnovers each then prevented scoring until the last minute where sophomore Bric Cates negotiated a layup to set the first quarter score at 10-6.

The Lions started the second with a pair of made free throws, but both teams suffered through a series of turnovers with no one scoring for nearly 3 minutes. Cates broke the ice with a free throw but a Gravette 12-footer made the Hawk lead shaky at 11-10. On the next Gravette possession, a Hawk player was set up in the path of a Lion dribbler. The Lion plowed into the Hawk player, but the referee called the foul on Pea Ridge. When protests were made, the referee then called a technical foul against Pea Ridge. All four shots were successful, leaving the Hawks behind 14-11.

Brewer made the lead short-lived with a 3-ball, tying the score at 14-all. A Lion 3-pointer got the lead back for the guests, but Bagsby’s shot in the final seconds made the halftime score 17-16, in Gravette’s favor.

Cates got the lead back with 7-footer early in the third, but a Lion 3-ball put them back up, at 20-18. Bagsby’s rebound shot tied the score, but a Lion hook shot in the paint gave them the lead back. Junior Trey Reed then made his presence felt with a shot behind the arc to regain the lead at 23-22, then after a Gravette layup gave the guests the lead again, Reed jammed another trey to grab the lead right back at 26-24.

Two Lion free tosses in the last minute sent the teams into the fourth period deadlocked at 26-26.

Things were looking good for the Hawks when Brewer stroked a trey, senior Greydon Edwards scored on a tip, with senior David Andrus scoring in the paint to start the fourth period. Gravette could only muster a lone free throw as Pea Ridge barged ahead 33-27 with less than 5 minutes left.

Gravette would then score another lone free throw, and after a bad pass by the Hawks led to a Lion layup, Gravette had cut the 6-point lead in half, 33-30, with 4 minutes left. Cates made a free throw but the guests countered with another hook shot to shrink the lead to 2 at 34-32. Another Hawk turnover led to a Lion trey and the guests were back on top — 35-34.

The Hawks could not score but the Lions could, as they placed a layup to take a 37-34 lead with 1:44 left in the game, Andrus scored in the paint to get the Hawks back to within 1. The Lions then decided to play keep-away with less than a minute left, forcing the Hawks to foul. They got all four attempts to fall to set the final score at 41-36.

The Hawks played a terrific game on defense but a 30% shooting percentage was too much to overcome.