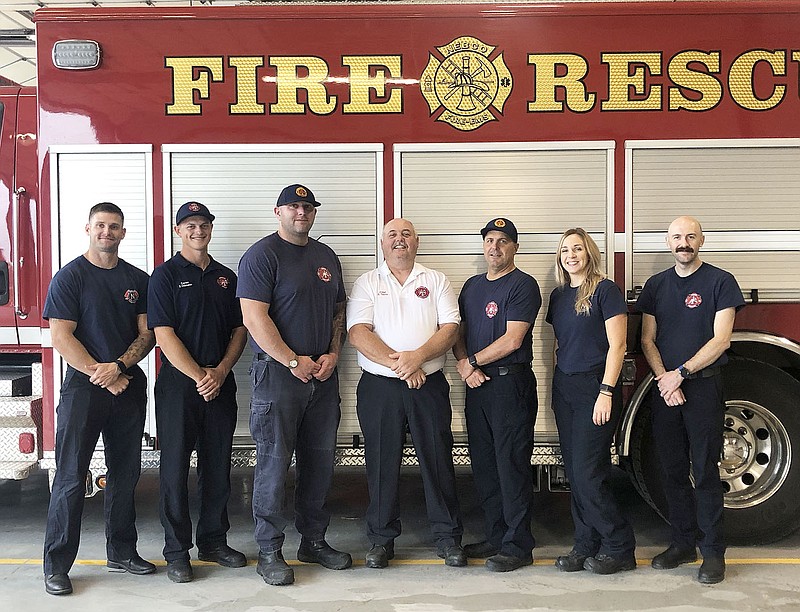 "Our response is going to be extremely faster now," NEBCO Fire Chief Rob Taylor said. "Prior to that, the ambulance would respond in the ambulance but the volunteers had to come from wherever they were."

There are 24 volunteers on the roster for NEBCO but most of them have 40-hour a week jobs and are not always available.

"You can't really depend on knowing when they're around. That's just part of volunteerism," Taylor said. "We're continuing to get busier and busier and getting more requests for service for the fire department."

"It's getting harder and harder to make those calls. When someone calls 911, they want service and they want it quickly," he said.

"We went to the community and they voted to do this," he said, referring to the July election in which voters approved the rate increase.

NEBCO, established in 1978, covers 84 square miles -- from the Carroll County line on the east, the Missouri line on the north to Beaver Lake on the south and Rogers on the west.

Taylor said the ambulance, which is a separate budget from the fire, is staffed 24 hours a day, seven days a week, 365 days a year with two persons and sometimes with four.

Taylor said no personnel are being hired full time, but the staff will be personnel from neighboring fire departments -- Rogers, Centerton, Bella Vista -- t0 man the shifts. Personnel staffing the night shift will be paid a stipend to stay home, be in the area, during the time they're on call.

Taylor said the time saved can mean life or death, a room fire or a total loss.

"We still have to have the volunteers," Taylor said. "What we're doing is getting someone on the scene immediately within 15 minutes or less."

"Every department across the country is trying to do best they can with the least they can," Taylor said.

Taylor, who is a 20-year veteran firefighter, is a captain with the Rogers Fire Department. He has been chief at NEBCO since 2002.

He said the NEBCO staff has improved over the years as the community has grown.

"Our training is better, our people are more qualified," Taylor said. "These guys who are working here also are working at other departments and are fully trained, able to bring that here and share with people here. I'm thankful these guys are willing to come here and work part time.

"It makes our community a lot safer when we do have an incident to have well-trained, qualified people responding," Taylor said. There are six certified trainers on staff.

"All employed are trained as firefighter 1 and firefighter 2 -- that's one of my primary goals. And, lots are paramedics and EMTs (emergency medical technicians). That is the other thing, the firetruck goes will all ambulance calls within NEBCO district, but not to Avoca or Pea Ridge," Taylor said, explaining that protocol provides extra hands at a scene when needed.

"It's all about giving better care and protecting our guys also," he said.

Currently, the roster of people to work the station includes about 10 or 15 people, but Taylor said that is being added to daily.

"We're right out of the gate right now, but we anticipate 20 to 25 when we really get things going."

"We would like to add another person after the first of the year if our budget allows that. It would really be nice to have three people on that fire truck, but we wanted to go into it slowly to see how budget went," he said.

Taylor said there are still financial needs with the department, especially as restrictions imposed by the covid-19 pandemic have canceled all scheduled fundraisers and community events like the Memorial and Labor Day breakfasts, the chili cook off and the Turkey Shoot. He said the income is decreased by about $15,000 in donations.

"We greatly appreciate our supporters out here," Taylor said. "It's been a unusual year for everybody including NEBCO, not being able to have any of our fundraisers."

He said the fundraisers are as much about fellowship and communication as they are about fundraising.

"We hope we can get back to having some of our events, to talk with people and share with people what's going on with NEBCO. We're trying to do better job with web site."

"The various fundraisers enhance and improves community, providing opportunities for the staff to visit with people about concerns and wants -- it gets them in the house so we can know what people are concerned about," Taylor said.

"We're like everybody else, our equipment is worn out, out of date. That's the thing we're addressing right now, trying to replace the gear, air packs is biggest concern. We're looking at just over $320,000 to replace air packs," he said, adding that NEBCO has applied for a FEMA grant and hope to begin replacing air packs a few at a time. "We're always open to donations."

NEBCO has 18 trucks and a fire boat and five stations.

"We're just continuing getting busier and busier. That's out of our control, I'm going to Missouri more then we've ever," Taylor said.

"Our primary goal is to help our citizens when they're in need. We're happy to do that, and we always want to be prepared when an ambulance is needed -- that's why we're here," Taylor said.

He said 15 years ago, NEBCO responded to three times more brush fires than it does now probably because the area is more populated and not as secluded as it was.

"If people have questions or concerns, call the office, we will do our best to help," Bland said. "If something is not right with billing or dues -- call. We don't always know when somebody sells property."

"We like the opportunity to fix the problems," Bland said, adding "Don't gripe about us, gripe to us."