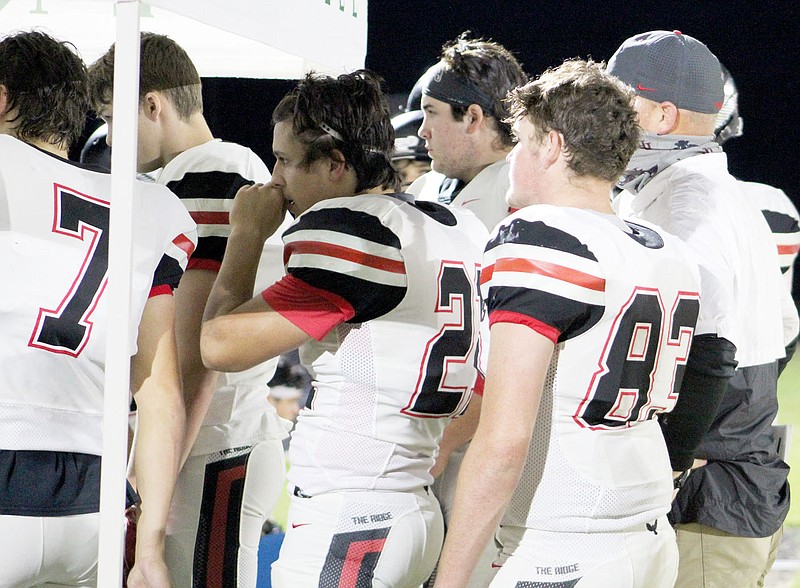 The Blackhawks' first season on 5A classification came to an end last week with a 56-21 loss to the state's sixth ranked team in the Magnolia Panthers.

The Hawks played well but had no answer for the speed of the Panther running backs, Magnolia scored six of their eight touchdowns with plays beginning on their side of the field. The Panthers only ran 20 offensive plays.

Blackhawk junior Joe Adams (No. 2) had another very successful night at running back, racking up 180 yards on 28 carries, averaging well over 6 yards per carry. It was his second near 200-yard performance against a Top 6-ranked team in as many weeks.

After jumping ahead 14-0 in the early going, Pea Ridge finally got some offensive steam, picking up a couple of first downs. Senior Carlos Martinez (No.19) ran for 5 then 2 yards with Adams getting the initial first down on a 4-yard jaunt to the Hawk 27. A penalty pushed the Hawks back, seemingly leading to a punt, but the Panthers roughed the snapper that gave the Hawks a first down on their 37. The good fortune dissipated quickly when the next play was an intercepted pass on the Panther 47.

Magnolia rushing star Garrion Curry was dropped for a loss on first down by senior Marcus Nobles (No. 23) and his second down run was brought down in the backfield by Adams for a 2-yard loss. However, Curry got outside on the next play, sprinting past Hawk defenders for a 56-yard scoring run, putting the hosts up 21-0 with 4 minutes left in the first quarter.

Nobles got off a great return on the ensuing kickoff, running the ball up to the Hawk 42. Martinez got 4 yards on first down with Adams getting 6 more on the next play for a first down on the Panther 48. However, penalties and incompletions pushed Pea Ridge back across midfield, forcing a punt from the Pea Ridge 49.

The Hawks' senior Mike Ericson (No. 51) gave the Hawks a great scoring opportunity when he forced a fumble on the punt receiver, recovering it on the Panther 18. Freshman Cody Morales then rushed 7 yards to the 7 with Adams taking it closer, gaining a tough yard to the 6. With a short third and 2 situation, a flag on the play pushed the Hawks back to the 11, then the opportunity went by the boards when the hosts intercepted a pass, returning it nearly 50 yards to the 50. Curry took a pass from Panther quarterback Dalen Blanchard on the first play, and ran the last 50 yards for the score. The PAT made it 28-0 with 5 seconds left in the first.

The Hawks refused to lay down, cranking up a nine-play drive deep into Panther territory. Starting from their own 35, Adams ripped off runs of 8 and 4 yards for a first down at the 47. Adams then broke loose for 20 yards, then 13 yards for a first down at the Magnolia 20. A 5-yard penalty was sandwiched between a pair of incompletions to bring up a fourth and 15 from the 25. Collin Stewart then launched a 42-yard field goal attempt which just barely missed left.

Panther Deray Williams took a second down handoff following the new possession, then bolted 71 yards for the hosts' fifth score. PAT made the score 35-0 which would start the mercy in the third quarter if the Hawks could not cut the lead.

It looked like the Hawks would do just that, as a short Adams run was followed up by a 13-yard pass from senior Zak Withrow (No. 5) to Nobles for a first down at the Hawk 40. Adams then ran twice for 4 yards, and another third down pass from Withrow to Nobles moved the chains, as the 7-yarder put the Hawks into Panther territory at the 49. Adams then ran for 13, 5 and 8 yards that along with a penalty, set the Hawks up first and 10 on the Magnolia 18. However, the ball came loose during the next play with Panther Marcus Harper scooping up the loose pigskin, returning it 82 yards for another touchdown for the hosts. The kick was good and Magnolia led 42-0.

Pea Ridge decided to keep it on the ground in the next series, but a fourth and 1 try came up just inches short. Morales got off runs of 4 and 5 yards to nearly move the chains but luck was in short supply this November evening. Magnolia, setting up on the Hawk 38, got a little yardage on two runs before Tanner Neilsen caught the defense looking the other way as he dashed 34 yards for their seventh touchdown. The kick made the halftime score 49-0.

With the mercy clock activated, the second half would be cut in half timewise. Adams got the first four handoffs of the third quarter and he made great use of them, rushing for 3, 10, 23 then 10 yards for a first down on the Panther 15. Withrow then broke loose for 14 yards but an unsportsmanlike penalty on a Hawk after the play, moved the ball back to the Panther 17. Morales then slashed for 5 yards with senior Samual Tillman (No. 89) catching a pass from Withrow for 3 yards to the Panther 7. Morales motored into the endzone on the next play to get the Hawks on the board, with senior Colin Stewart's (No. 42) kick cutting the lead to 49-7

The good fortune was a bit blunted when the Panthers' Harper returned the kickoff 73 yards to score Magnolia's final touchdown, boosting the lead to 56-7.

Nobles stepped up following the kickoff with a short rush, then snagging a 39-yard pass from Withrow to the Panther 25 for the Hawks' fourth scoring opportunity. It was the Adams' show to the end zone as the junior tailback ran for 11, 11, then 3 yards for a touchdown with 8:52 showing in the game. Stewarts' kick was accurate and the Hawks trailed 56-14.

The Hawk defense threw the Panthers for a loss on the next play, then knocked the ball loose 4 yards deep for a recovery on the Magnolia 19. Adams dashed for 5 yards to the 14, then Morales took it the rest of the way on the next play. The score along with Stewart's kick made the final score 56-21.

The loss wrapped up the Hawks' first campaign in the 5A classification. With several key injuries and the season plagued by pandemic cancellations, the Hawks had a rocky entrance into a higher division with a 1-7 season record. But, with similar results happening when the Hawks ascended into the 4A class from the 3A classification, the Blackhawks will be back as the school grows and the program improves. 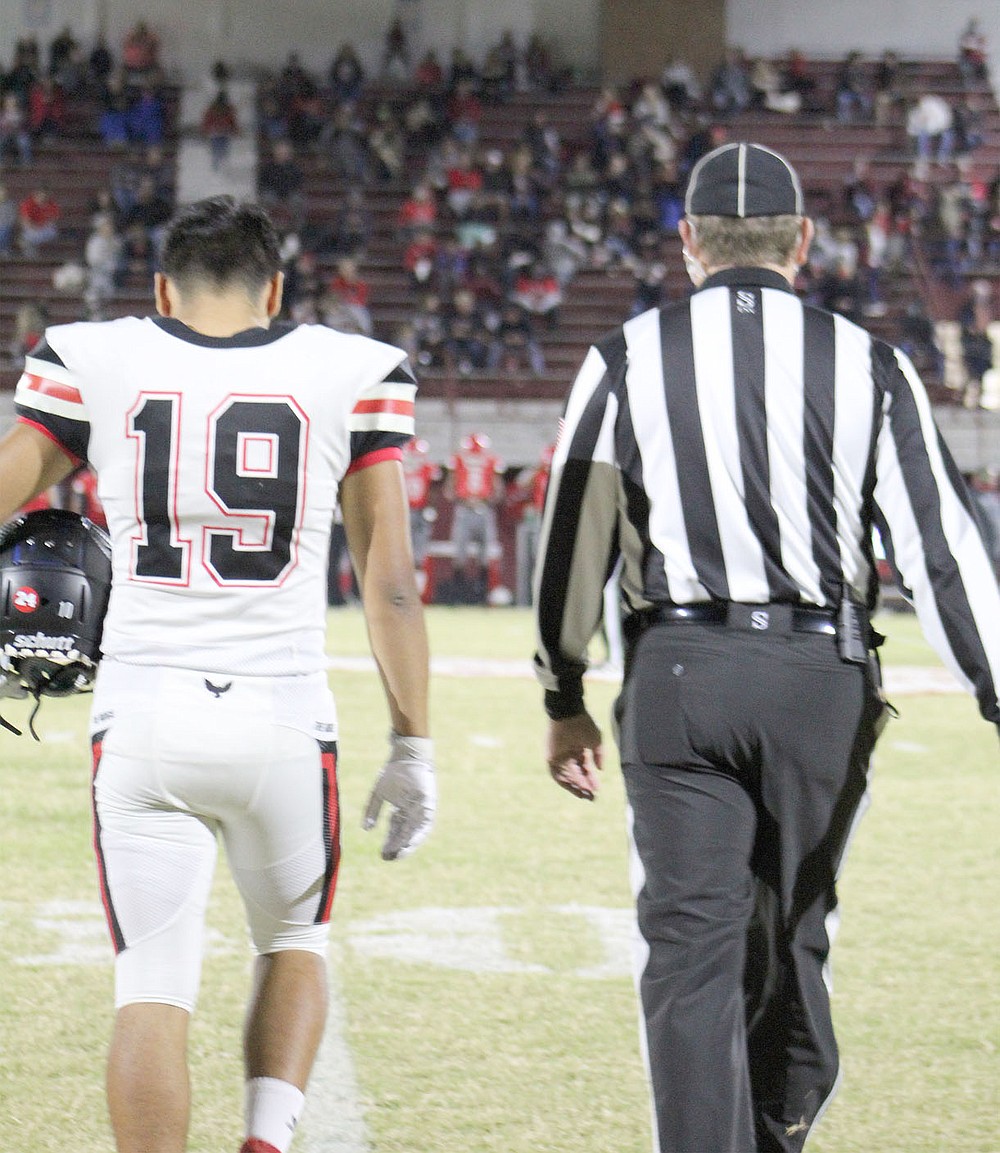 Blackhawk senior Carlos Martinez (No.19) walked to the center of the field as captain Friday, Nov. 13. 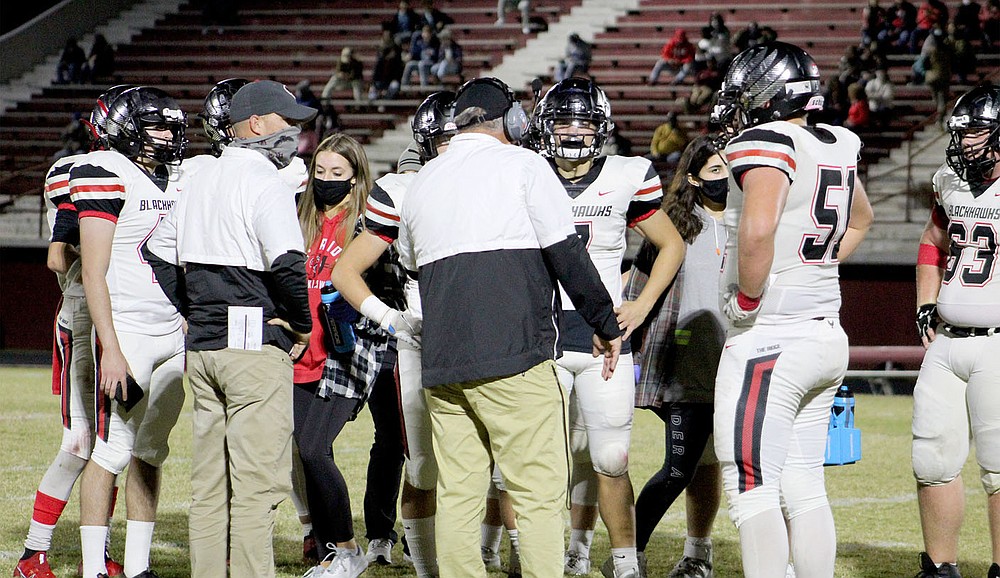 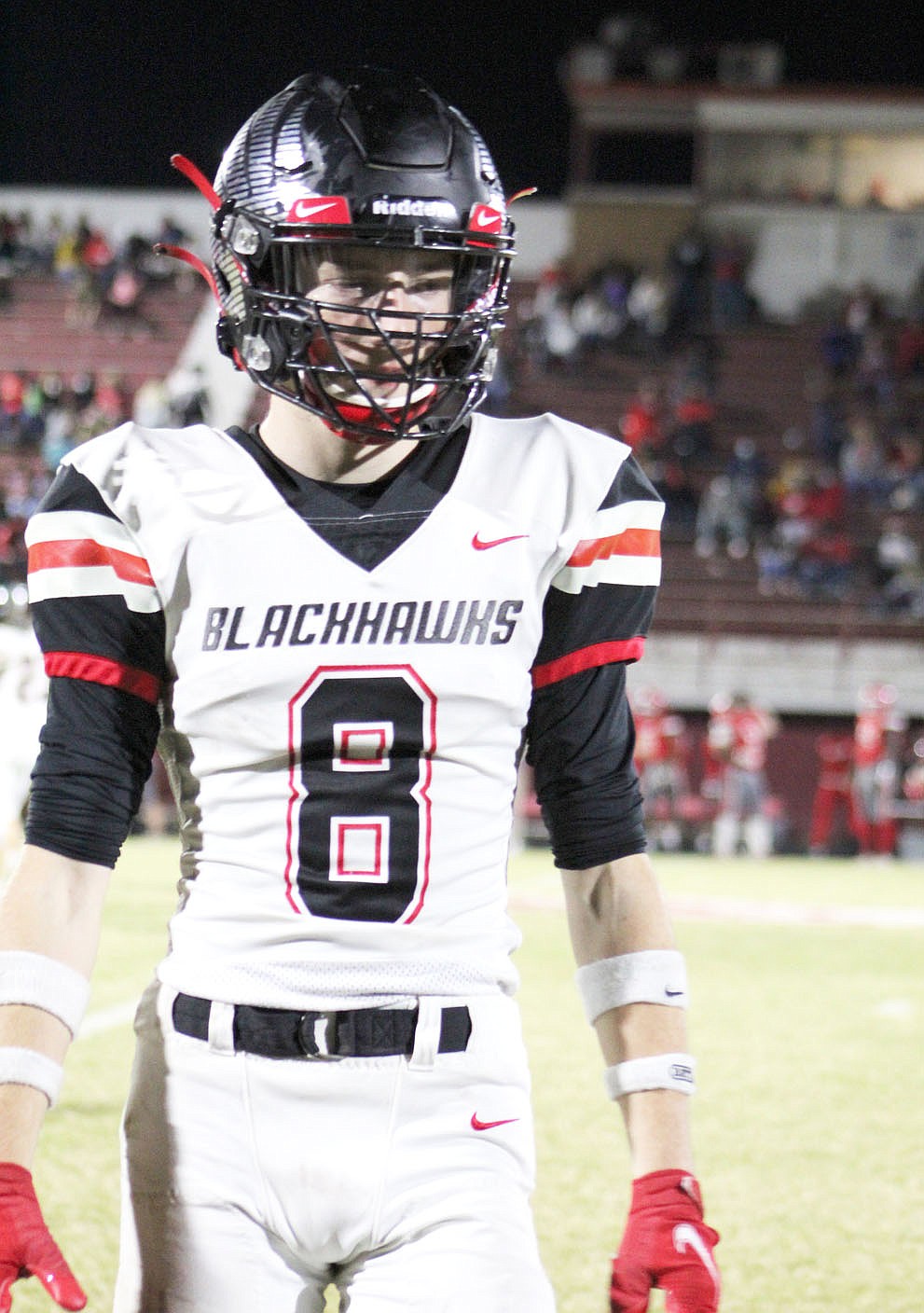 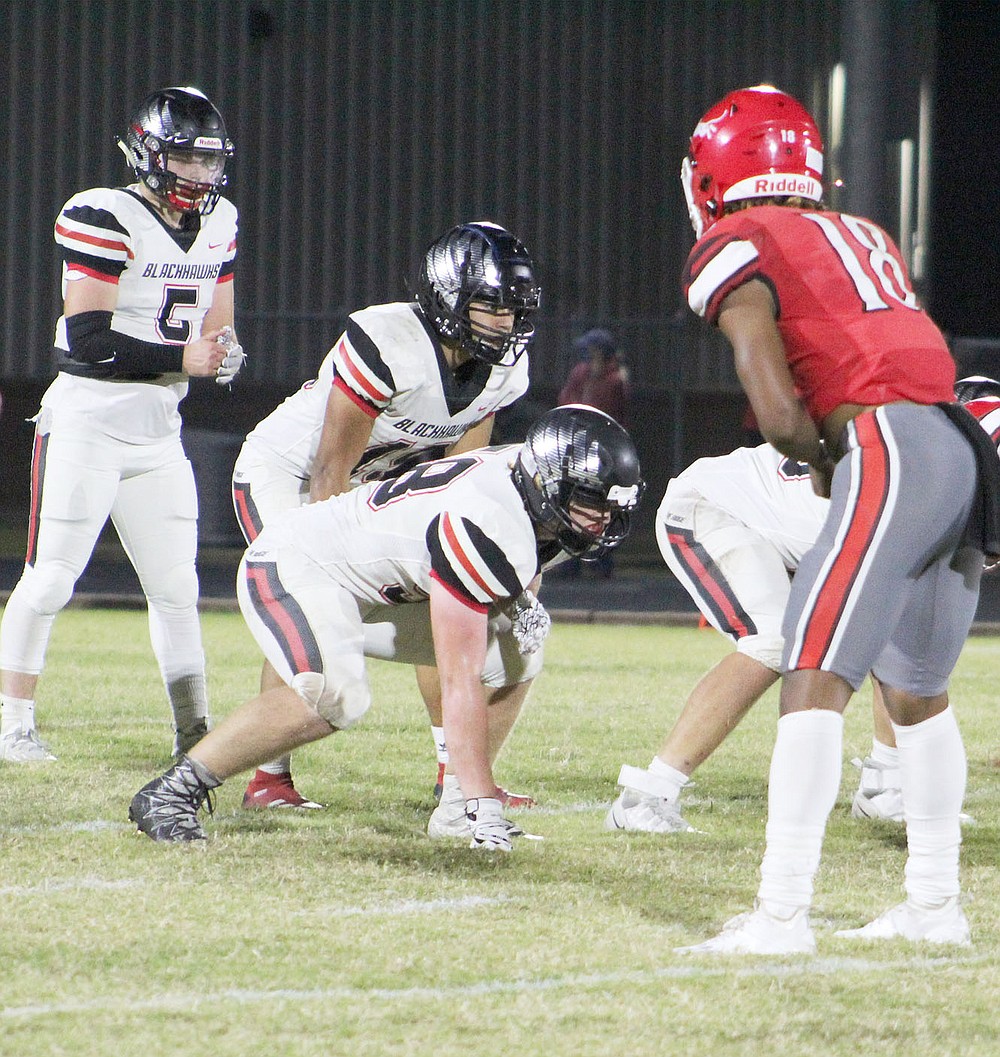