Jeff Williams' Pea Ridge Blackhawks fought the heavily favored undefeated Harrison Goblins on nearly even terms for much of the season finale before losing a 49-28 decision in their final home game.

The Hawks did not wrap up their season as they will be in the 5A state playoffs for the first time ever as they will play at the home of third seed of the 5A South, Magnolia. That game will be Friday at 7 p.m.

The Hawks had a disastrous first quarter as they fell behind 28-7 after the first 12 minutes. From that point on, the Hawks and Goblins battled evenly with each team scoring a touchdown in the second, third and fourth quarters.

Several Blackhawks had stellar games with junior Joe Adams having the best rushing night of his career, picking up 184 yards on 27 carries. Freshman Cody Morales had an auspicious debut, slashing for 75 yards on 10 carries, tallying his first varsity touchdown.

Things got off to a rocky start when Harrison signal Caller Cole Keelan threw a 67-yard strike to Noah Moix to score on the game's first play. Moix kicked the PAT to put the guests up 7-0 after 18 seconds.

The Hawks could not move the Goblin defense, forcing a punt to the Harrison 35. Six plays later, the visitors were back in the end zone on a 6-yard sneak by Keelan, with the kick expanding their lead to 14-0 with 9 minutes to go in the first.

Adams entered the game on the second Hawk possession and he immediately made a difference, rushing nine times for 50 yards to the Harrison 5. Two runs by senior Zak Withrow and Pea Ridge was on the scoreboard. His final 1-yard run with 4:17 left in the period was followed by senior Collin Stewart's perfect PAT to half the lead to 14-7.

Keelan drove the Goblins quickly down the field following the kickoff, completing four straight passes for 78 yards to the Hawk 10. Keelan rammed it in on third down from the 3 with the PAT boosting their lead to 21-7.

The Hawks could not get untracked, forced to punt facing a fourth and 8 from the 34. Harrison Tyler Hutcheson took the kick and ran it back 65 yards to score, pushing the guests to a 28-7 lead as the quarter ended.

A 30-yarder from Withrow to Anderson, then a 16-yard toss to junior Trevor Blair gave the Hawks great field position inside the Harrison 20. Runs by Adams had the Hawks knocking on the door with a first down on the Goblin 8. However, a fumble on the next play extinguished the threat.

The Hawks looked great on defense, stopping a passing attempt, then throwing the Goblins for a 5-yard loss on second down. However, a short pass from Keelan to Moix resulted in a 95-yard scoring strike to seemingly almost put the game out of reach. The point after put the guests ahead 35-7 with 10:16 left in the half.

At a point when most teams would wilt under the pressure, the Hawks doubled down, launching an 11-play, 86-yard scoring drive. Adams rushed for 7, 9 and 10 yards that coupled with a 5-yard pass to junior Will Anderson and a 11-yarder to Carlos Martinez, gave the Hawks a first down on the Harrison 39. Adams ran for 7 yards with Martinez getting a short gain to the Goblin 31. From there, Withrow launched a fourth down pass into the left near corner of the end zone with Anderson making a sensational acrobatic catch in traffic to score. Stewart's kick shrunk the deficit to 35-14 with 6 minutes left in the half.

After trading interceptions, only the sixth one Harrison's Keelan has suffered all year, the Hawks came up with a tremendous defensive play, stopping Harrison short on fourth down near mid-field.

An 11-yard run by Adams gave the Hawks a first down on their 41 to kickstart a comeback, but back to back penalties pushed Pea Ridge way back, as the locals were saddled with a second and 34 situation. A Withrow strike to Blair got back 32 yards, but third down play did not work, forcing a punt back to Harrison. The Hawks kept the Goblins bottled up the rest of the half as the buzzer sounded with Harrison up 35-14.

The Blackhawks came out of the break determined to get back into the game, and they put together a time consuming drive to the Harrison 3. Adams got it rolling with an 11-yard run, pushing his total to 126 for the game. With the Goblin defense now seemingly geared to stop Adams, freshman Cody Morales got his first taste of varsity ball and he made the most of it, rushing six times for 44 yards, gaining a first down on the Harrison 11.

Adams picked up six yards to the Goblin 5 with Withrow blasting for another two setting up a big fourth and 3 play from the 3. Rolling right, Withrow suddenly threw left into the hands of end Samual Tillman to seemingly cut the deficit to 35-21. However, the referees ruled the pass illegal, then awarded the ball to Harrison on the 5-yard line. On second down, Keelan threw a short pass to Julious Scott who out maneuvered a host of Hawk defenders to cruise 95 yards for a score. With the PAT, a possible score of 35-21 flipped to 42-14 with 4 minutes left in the third quarter.

To their credit, the Hawks took this additional misfortune in stride, as Adams ran for 9 then 11 yards on the first plays following the kickoff. Withrow found Martinez open again, with the senior back taking the ball 12 yards downfield into Harrison territory on the 43. Adams scooted for 8 yards with a Withrow to Anderson pass netting 6 yards and a first down on the Goblin 29. Adams then ran for 7, with Morales punching through for 6 and 3 yards to the Harrison 13. From there, Withrow threw second down pass to Blair who took it in while in traffic to score the Hawks' third touchdown. The PAT made it 42-21 with 1:02 left in the third.

There was a lot of fight left in the Hawks, with the defense keeping the guests bottled up on their side of the field, forcing a punt. Adams ran for 6 then 8 yards for a first down on the Hawk 21. A Goblin defender was all over Blair, drawing a 15-yard interference penalty to move the ball to the 36. A Withrow to Blair pass in traffic, netted 13 yards to the Hawk 49. A short run by Morales pushed the ball into Goblin territory at the 48 where Withrow threw a strike to senior Marcus Nobles who made a fantastic catch in the midst of fighting off defenders, bringing the ball down on the Harrison 14. Morales nearly took it to the house, running 13 yards before being brought down just shy of the goal line at the 1. The flashy freshman then rammed it in for the Hawks' fourth score, narrowing the led to 42-28 with over 8 minutes left.

The Hawks' season was extended when the Arkansas Activities Association announced that all 5A teams were eligible for the playoffs if they declared by Monday.

After their offensive success against the state's second ranked team in Harrison, the Blackhawks may well extend their season even more after this first round match up. Hit with adversity all season long with devastating injuries and a long virus related hiatus, along with curious officiating, perhaps Pea Ridge can turn a corner.

Zak Withrow had a good night quarterbacking, completing 12 of 20 for 216 yards. Trevor Blair caught five of the tosses for 76 yards with Will Anderson snagging four for 72 yards. 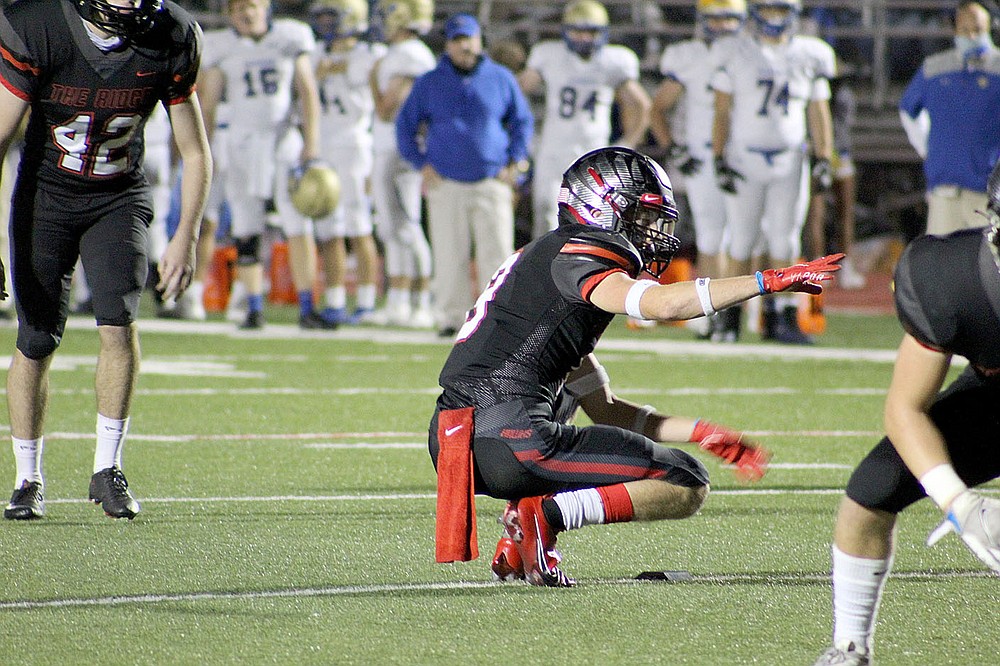 Blackhawk senior Thaddeus Timmons (No. 63) holds off a Harrison Goblin protecting ball carrier Joe Adams (No. 2) during the Friday, Nov. 6, 2020, game against Harrison in Pea Ridge. 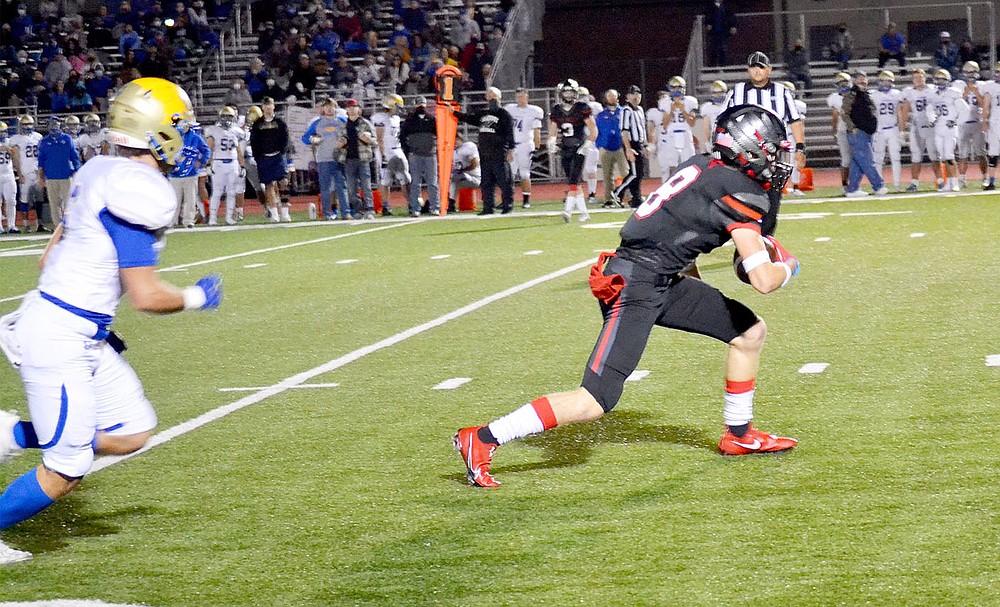 Blackhawk junior Trevor Blair (No. 8) runs the ball Friday, Nov. 6, 2020, staying ahead of a Goblin defender. 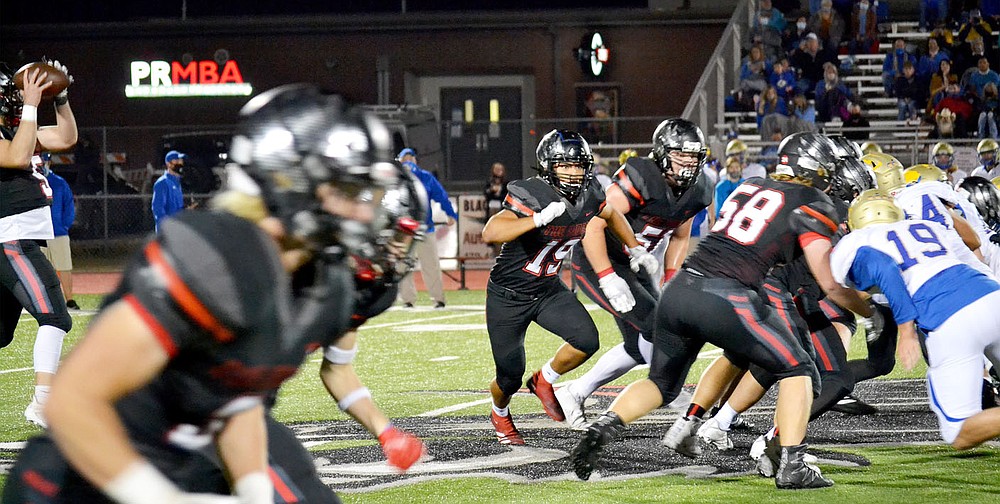 Blackhawk running back Carlos Martinez (No. 19) ... 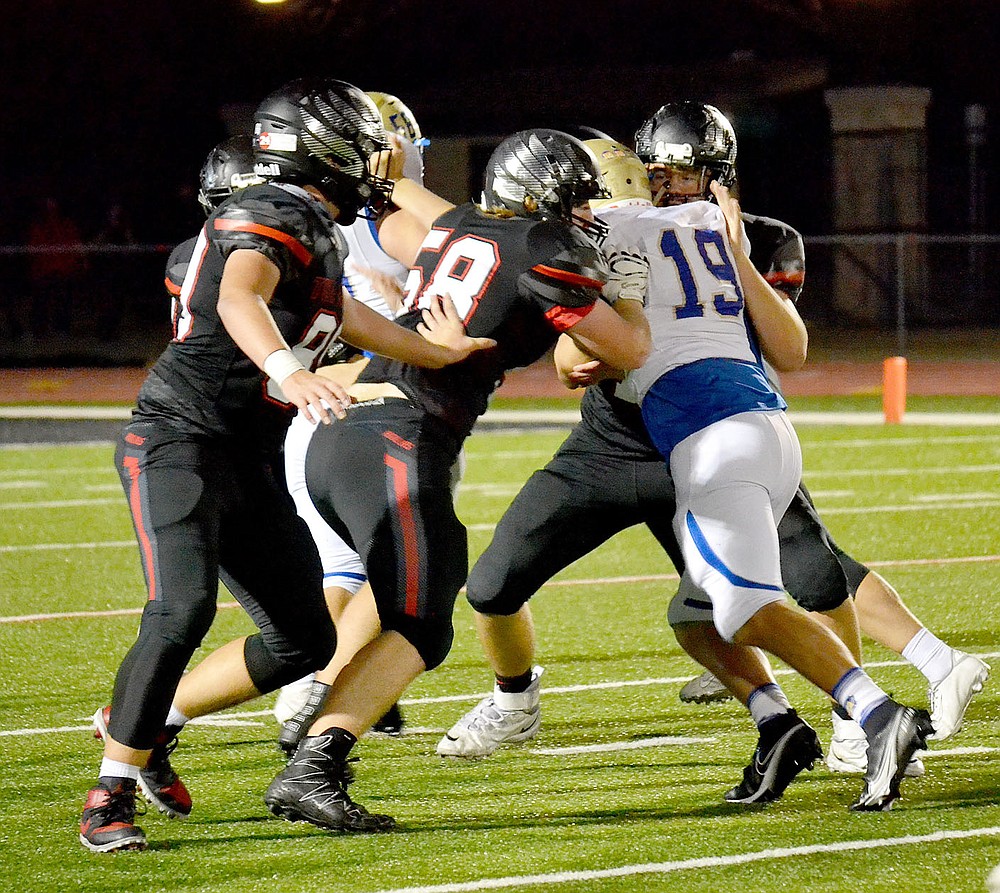 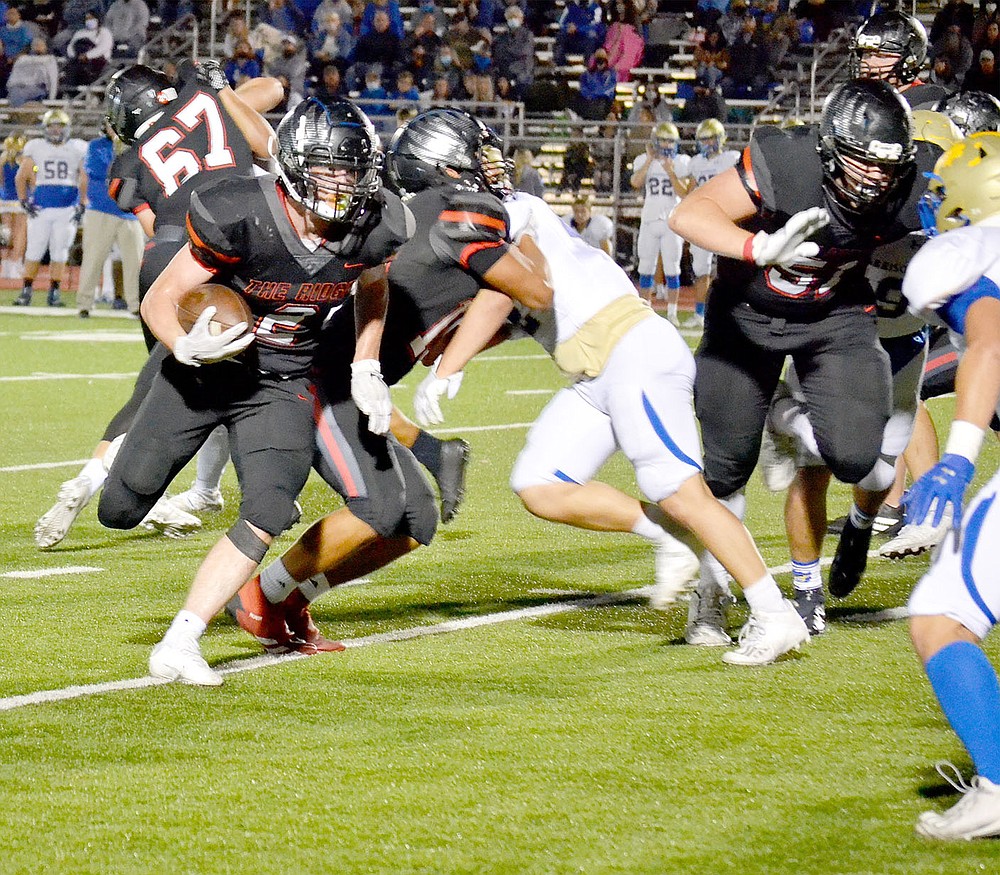 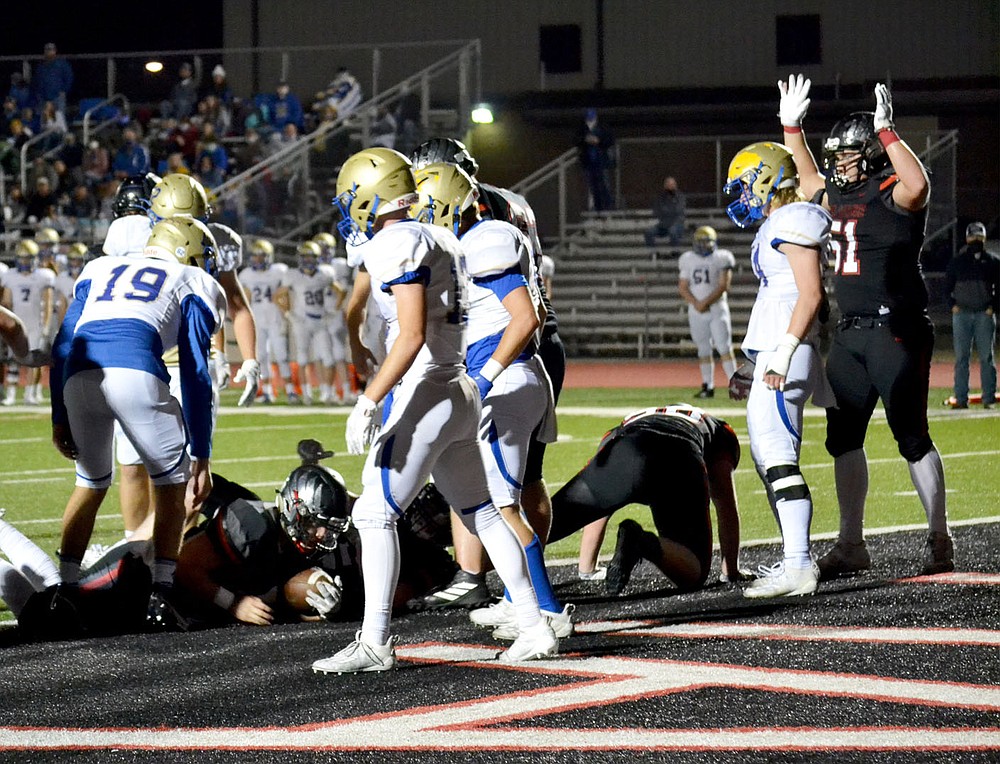 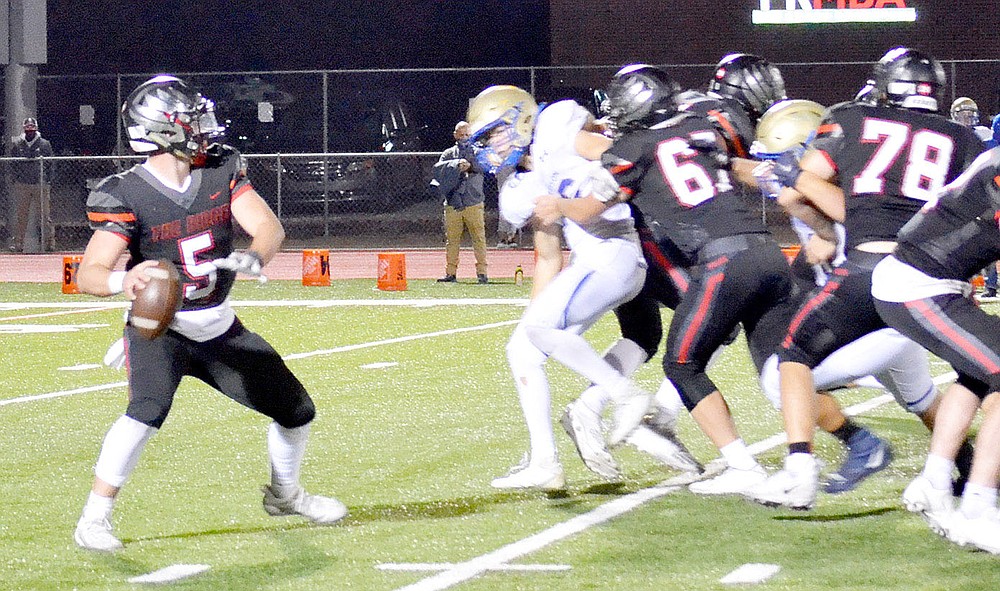 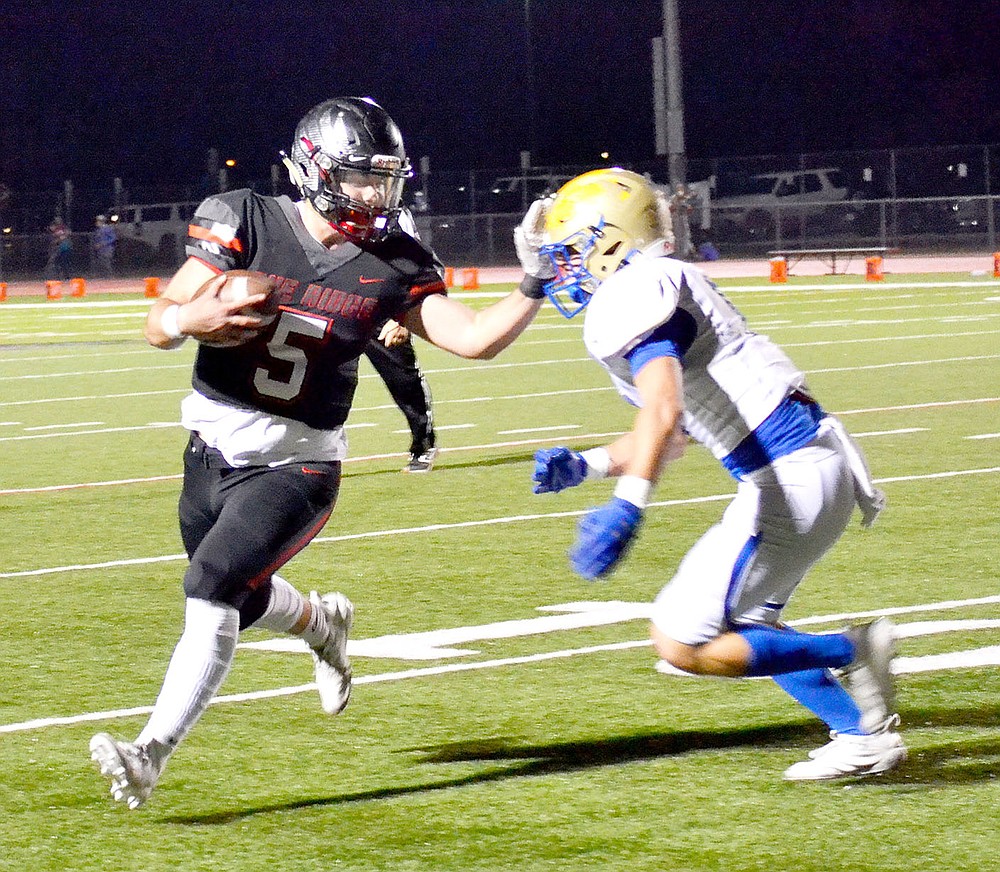 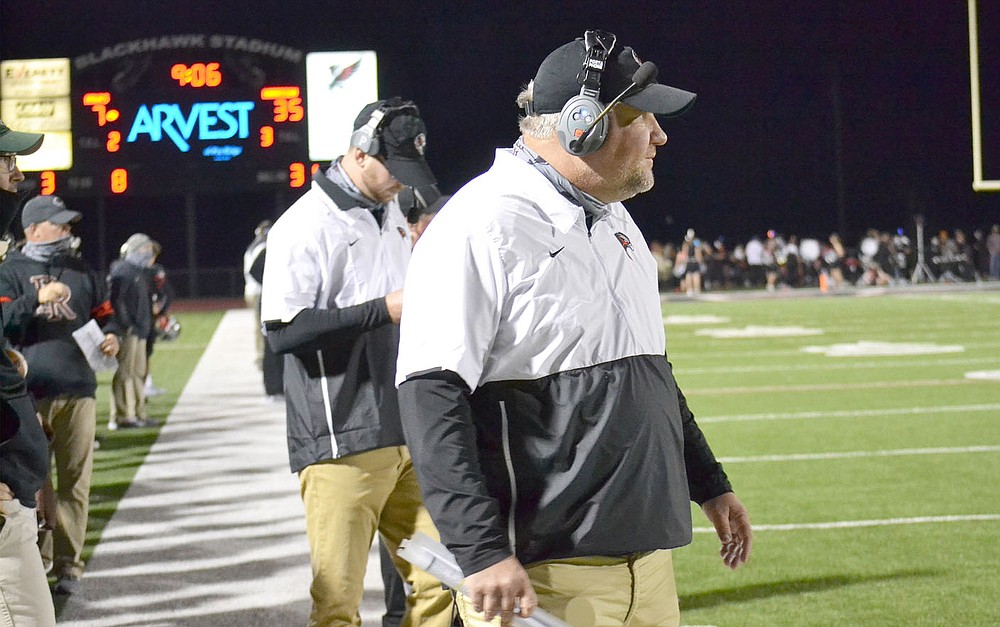 Blackhawk head coach Jeff Williams and assistant coach Cody Alexander on the sidelines Friday, Nov. 6, 2020, during the first quarter of play against the Harrison Goblins in Blackhawk Stadium.