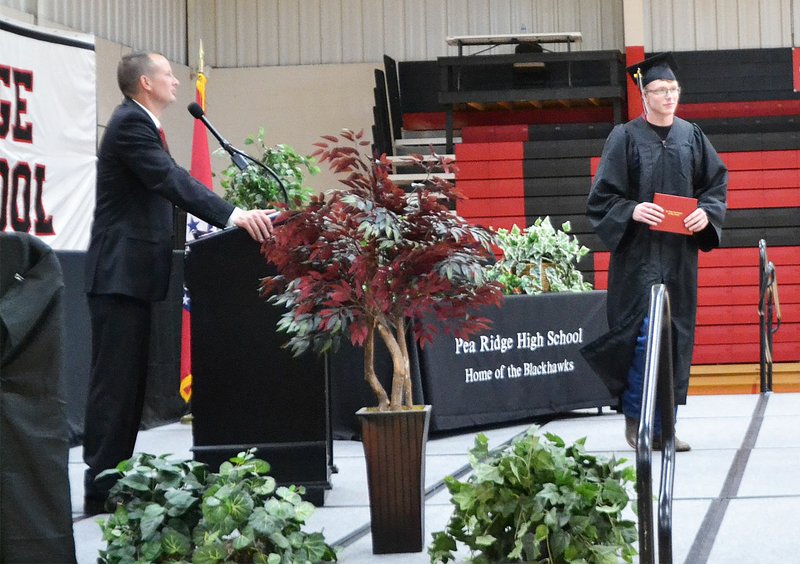 "It's as though there are 164 personal graduations," Mark Laster quipped Monday, May 18, as he and Faith Wilson video taped each Pea Ridge High School graduating senior walk across the stage set up in an almost empty gym.

Each graduating senior was allotted a five-minute time frame to walk across the stage with four guests watching and then taking photographs. School officials had set up a screening table by the door to the lobby where school nurse LaRay Thetford took temperatures of persons entering the gym. All were asked to wear face masks until taking photographs.

Seniors dropped off their chrome books to media specialist Misty Harris before entering the gym. Then, teacher Holly Dayberry outfitted honors and high honors students with stoles and cords signifying their honors and affiliations including National Honor Society, DECA, FCCLA, FFA, Student Council, CTE completers, NTI graduates, Boys State and NWACC Rising Scholars. She also gave each senior flowers to present to their mothers, a tradition normally done during baccalaureate, which was also canceled because of restrictions imposed because of Covid-19. The baccalaureate ceremony was held virtually and released Friday, May 15.

"We wanted to make it special for them," Dayberry said.

High School principal Charley Clark stood behind a podium on stage announcing each graduate's name as the graduate walked onto the stage, picked up a diploma, then paused for photographs before exiting the stage and going to the back of the gym for photographs with their guests.

Those 164 video clips, along with video of speeches, will be edited and assembled by Laster to be released Saturday, May 30, as a complete virtual graduation ceremony.

"We've heard nothing but good," Clark said Monday afternoon. He said parents had expressed appreciation and gratitude for the extra effort school officials are taking to create a special ceremony for students.