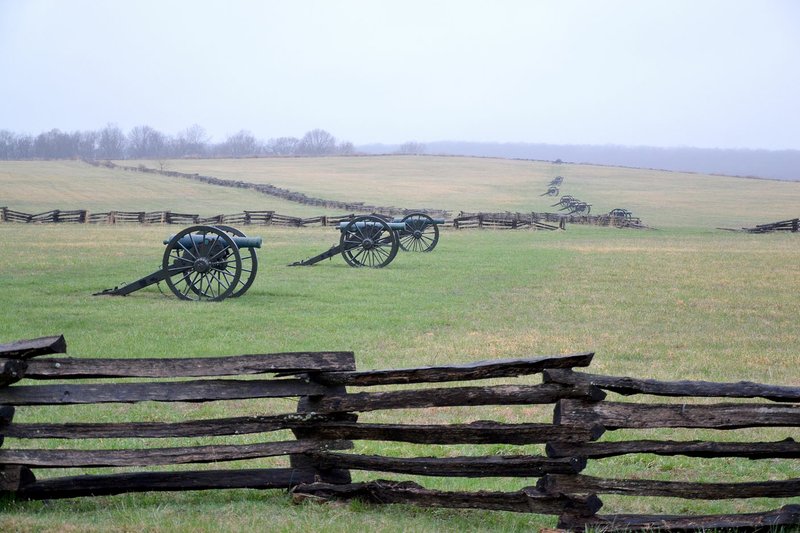 Nestled in the hills and hollows of the Ozarks, the Pea Ridge National Military Park preserves nearly 4,300 acres of rural Ozarks land on which the March 7-8, 1862, Battle of Pea Ridge was fought, which helped save Missouri for the Union.

There were farms on the hilly Arkansas land across which the Telegraph Road traversed. Near the intersection with the Huntsville Road, Elkhorn Tavern, the home of Joseph and Lucinda Cox offered shelter to travelers.

See visitor center staff for rules and regulations regarding activities.

and on the Pea Ridge National Military Park Facebook page.

The cell phone tour can be found at:

As of March 18, 2020, the park visitor center will be closed until further notice. Where it is possible to adhere to the latest health guidelines, the park grounds, tour road, and all trails will remain open to visitors with no fee. As a way to enjoy the park online, visitors may also visit the park website at https://www.nps.gov/peri, which will provide park updates and history.

Then, the soldiers came -- more than 10,000 Federal soldiers and 16,000 Confederate soldiers. Over two days of fighting, across the cornfields and through the woods, left more than 1,384 Federal casualties and 2,000 Confederate casualties including killed, wounded and missing. The tavern became a makeshift hospital while the family huddled in the basement below.

After the battle, families began to return to their farms and the land was again farmed. In 1956, the park was created by an Act of Congress. Many of the homes on the park were moved and several are still standing in the nearby city of Pea Ridge.

Elkhorn Tavern was believed to have been built about 1833 by William Ruddick. By 1861, the inhabitants of the tavern were Joseph and Lucinda Cox. The building was used as a makeshift hospital during the battle, according to park records. The building was burned in 1863, then rebuilt on the original foundation in 1865.

The park offers self-guided tours by cell phone or by audio on compact discs. Visitors are encouraged to allow a minimum of 30 minutes for the tour.

Editor's note: This article is the first in a two-part series featuring the Pea Ridge National Military Park. To be continued April 1, 2020.