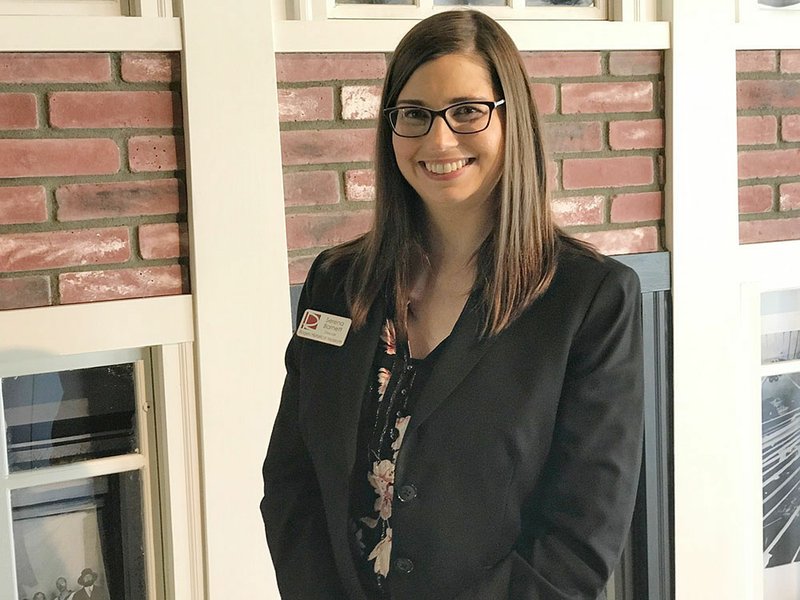 NWA Democrat-Gazette photograph by Becca Martin-Brown What Serena Barnett wants more than anything is to see the Rogers Historical Museum "be not just a vital part of downtown Rogers, but an irreplaceable part of our regional community. I want to make sure that everyone can connect to our history on some level."

Serena Rothfus Barnett was born at Rogers Memorial Hospital, but her roots in northwest Arkansas actually go back seven generations -- eight, if you count her nephew Audie, who just turned 16 months old. Her fifth-great-grandfather William Ruddick built the building that would become Elkhorn Tavern at the Pea Ridge Battlefield. Her grandmother graduated from Rogers High School in 1951, her mom in 1981 and Barnett in 2000. She visited the Rogers Historical Museum on dozens of school field trips and got her first job there while she was attending Northwest Arkansas Community College.

On March 12, friends and supporters of the museum were invited to welcome Barnett to her role as director.

Barnett absolutely glows talking about the confluence of good luck, good timing and a perfect skill set that brought her back to her first professional love. She didn't know she wanted to work in a museum until she was hired by Gaye Bland, RHM's previous director, for that education assistant job in 2002.

"After graduating from NWACC with my associate degree, I took a four-year hiatus from school as I was then undecided on a career path," Barnett says. "And at some point, after working here for 5 1/2 years, I decided this -- working in a museum -- was what I wanted."

She enrolled at the University of Arkansas in Fayetteville to earn a bachelor of arts degree in history, but she had to give up her RHM job to do it. Already serving on the Pea Ridge National Military Park Foundation, she just happened to mention to Superintendent John Scott that she was looking for a new job. And he just happened to have a job opening. So Barnett spent two years there as a seasonal park ranger, then managed the museum store at the park -- a job that just happened to come open -- while she earned a master of arts in museum studies from Johns Hopkins University via the internet.

Oh, but that was only the beginning of the serendipity. Barnett's husband, Todd Barnett, had a job opportunity in Tulsa, Okla., and after first volunteering at the Tulsa Historical Society and Museum, Serena happened on to a position in visitor services at the Gilcrease Museum there. And not long after, they moved back to Northwest Arkansas, John Burroughs opened the doors of the newly redesigned and remodeled Rogers Historical Museum at the end of 2018 -- then resigned to deal with family matters in Illinois.

"And here we are," Barnett marvels. "Talk about coming back home! I love this museum. This is my hometown museum, and I'm passionate about our history because it is my history."

But Barnett believes that should be true not just for those with roots dug deep into Northwest Arkansas soil.

"I don't care if you've lived here your whole life or you moved here last week," she says. "This is your history! You will always be a part of it."

Barnett says Burroughs got the museum's new home built in the Hailey Ford building, and now it's up to her and her staff and volunteers to build the community around it. That means, she says, offering "something for everyone," whether it's an event, an exhibit, a program -- "whatever it takes to pique your interest."

Right now, that means an art exhibit curated by local artist Kinya Christian and titled "Reflections of The Black Experience," on show through March 31 in the Dick and Nancy Trammel Gallery.

"The Trammel Gallery gives us a great opportunity to showcase exhibits we wouldn't have had space for before the expansion," says Barnett, "exhibits that look at our community in more depth and with more complexity."

The next exhibit, she says, is an in-house production that will consider influential women of Arkansas from the suffragettes to today -- without whose efforts in fighting for women's rights, she wouldn't be sitting in the director's chair today, Barnett says.

Print Headline: Blossoming from her roots