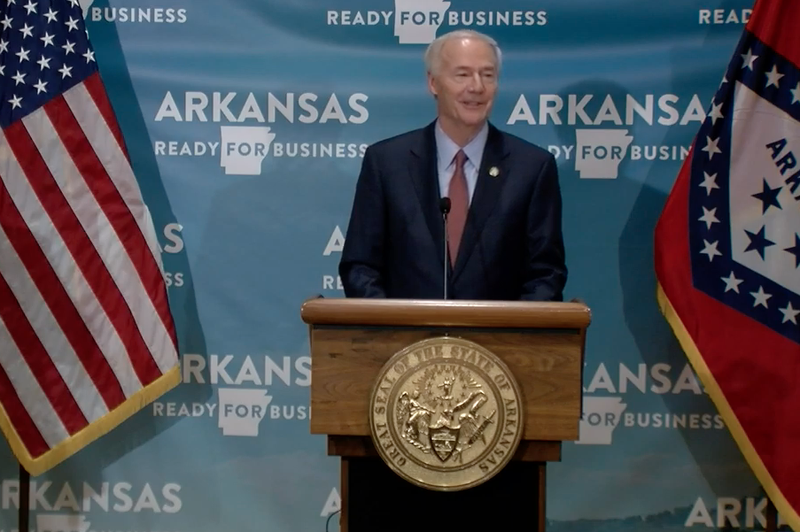 Arkansas Gov. Asa Hutchinson speaks to reporters in Little Rock on Friday in this screen grab of video provided by the governor's office.

Arkansas' count of coronavirus cases rose Friday by 226, while its death toll from the virus rose by one, to 152, state officials said.

The increase in cases was the lowest number added in a single day since Monday and came after spikes of more than 300 on Tuesday and Thursday.

At his daily news conference on the pandemic, Gov. Asa Hutchinson expressed encouragement about Friday's number and showed a graph indicating that the average number of cases added each day over a rolling seven-day period had begun to dip.

"Hopefully, when you see that flatten out up there, hopefully that will continue," he said. "That would be a good sign for us."

Department of Health Secretary Nate Smith said the department, which has about 200 people assigned to the effort now, was releasing requests for qualifications Friday to hire a company that would provide the state with 350 contact tracers.

Next week, the department also plans to begin training up to 100 volunteers from organizations such as the Arkansas Foundation for Medical Care and Central Arkansas Library System to help out.

Currently, "I would say that our contact tracing team is handing it, but they are definitely stretched," he said.

Hutchinson also said he would speak more on Monday about the possibility, which he first raised on Thursday, of beginning a regional approach to lifting restrictions that were imposed to slow the spread of the coronavirus.

Data that he presented at the news conference, showing the number of tests that had been conducted in each of the state's five public health regions, "is very informative to us," he said.

"That's a data point that we needed," he said.

The total number of confirmed coronavirus cases in Arkansas remained at 8,425 Friday morning, according to a state website. The death toll remained at 151.

Check back to watch the live video.

[Video not showing up above? Click here to view » https://www.youtube.com/watch?v=ORgRDv3oBGg]