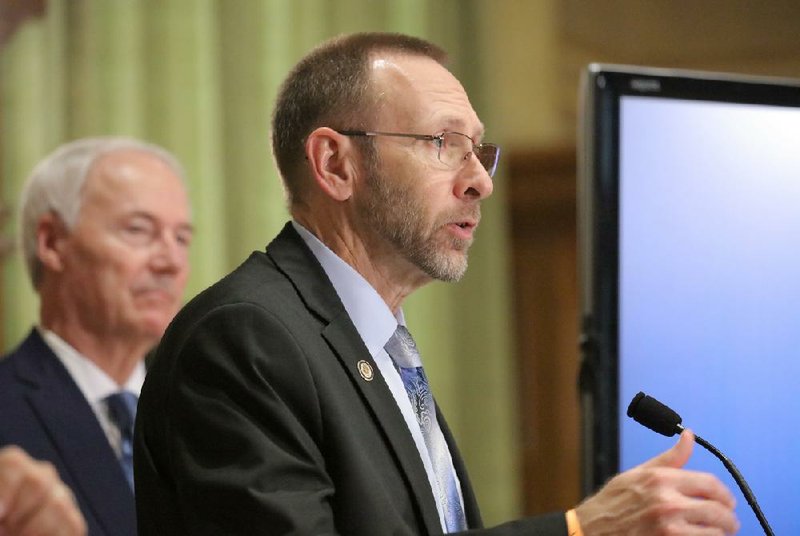 Gov. Asa Hutchinson on Wednesday touted the state's plan to test every nursing home resident and staff member this month as the state's official count of its coronavirus cases rose by 249, topping 8,000.

The state's count of virus deaths rose by six, one of the highest one-day increases so far, to 142.

The federal Centers for Medicare and Medicaid Services last month recommended that states test all nursing home residents and staff members before beginning to lift some of the restrictions imposed to protect residents from covid-19 infections.

Hutchinson said one of the goals of Arkansas' effort will be to "have a plan so that down the road, we can be successful in reallowing family visits to nursing homes."

"We're not there yet, but that's one of the stepping stones, is to do this testing so we can get there," he said.

The federal guidelines for nursing homes say that visitation should be limited to "compassionate care situations" until a state enters its third phase of eased restrictions on businesses as set out in White House guidelines for reopening.

Arkansas on May 4 entered its first phase of loosening such restrictions.

With new cases recently on the rise, Hutchinson has said the state isn't ready to enter the second phase.

[Video not showing up above? Click here to watch » https://www.youtube.com/watch?v=RC-cC0x6fTE]

Rachel Bunch, director of the Arkansas Health Care Association, which represents nursing homes, said her group has "proposed an individual facility approach for reopening" that would allow some nursing homes that complete their testing to "start this reopening process with limitations in place as outlined by state Health Department."

She noted that while some nursing homes have had residents or workers test positive, "many, I would say most, have not."

"Some facilities may open before others, and testing with negative results will have to happen before reopening occurs," she said at Hutchinson's daily news conference on the coronavirus.

Department of Health Secretary Nate Smith said his department is developing guidelines that will involve limiting the number of visitors and requiring them to be screened and wear masks.

Visits would also have to occur in a "designated area" rather than a resident's room, he said.

"There are ways that we can do this, to not make it zero risk but to minimize that risk," he said.

According to news reports, the White House on May 11 recommended that states perform the testing within two weeks, a goal that Arkansas and many other states didn't meet.

Hutchinson announced his plan, which also involves testing residents at assisted living facilities, substance abuse treatment centers and other institutions, on May 19.

At the time, Smith cited the state's increased testing capacity and the experience of other states as a reason to expand testing in Arkansas.

[Interactive Arkansas map not showing up above? Click here to see it: nwaonline.com/arvirus]

"The reason all of this is important is that these represent the most vulnerable citizens of Arkansas, and they're also our family members," Hutchinson said Wednesday.

"We care for them, we love them, we want them to have a safe environment, and I applaud the Health Care Association, Rachel Bunch, for really making sure and working hard that we minimize and try to reduce covid-19 in the nursing homes, and I think we've had some success as a result of that."

Nasal swabs will be collected by nursing-home staffs and sent to LabCorp of Burlington, N.C., to be analyzed, Hutchinson said.

The cost will be paid by Medicaid, Medicare, private insurance or through federal coronavirus relief funds, he said.

Smith noted that nursing home residents made up 5.2% of the 8,067 cases in Arkansas' official tally as of Wednesday, but 39% of its virus deaths.

"Our nursing home residents are very vulnerable, and that's why we've spent so much time focusing on them, trying to protect them," Smith said.

Later Wednesday, the deaths of two more nursing home residents were added to a count on a state website, raising the total to 57.

But as tracked in Health Department reports, which also include assisted living facilities, the number rose Wednesday from 57 to 61.

Among the state's 75 counties, Pulaski County on Wednesday had the largest number of new cases, 33. That was down from the 63 cases that were added in the county a day earlier.

According to data collected by The New York Times, it was still the third-highest single-day increase for the county, exceeded only by Tuesday and April 15, when 56 cases were added.

Smith said an outbreak at a nursing home in Jacksonville accounted for much of the county's increase on Tuesday.

Of the 33 newest cases, he said, 64% were of Little Rock residents. They range in age from 4 to 92. Members of four households account for nine of the cases.

At least one person had been to a family birthday party.

"That's one where we prioritize the contact tracing because we know that there may be several who were exposed all at once," Smith said.

It's also possible that some people "who did things on Memorial Day weekend that they maybe ought not to have done, that they're now starting to develop symptoms and get tested," Smith said.

"I don't know that, but this is about the time that we might expect to see Memorial Day phenomenon."

He added that 75% to 80% of new cases in the state have recently been connected to people who tested positive earlier and were known to the Health Department, were associated with known clusters or had risk factors such as travel to areas with larger outbreaks.

The cases increased Wednesday by 28 in Washington County, 23 in Sevier County and 20 in Benton County.

Each of those counties, which have had outbreaks linked to poultry companies, have posted some of the state's largest increases in the past several days.

At least two health care facilities in Pulaski County have had outbreaks in recent days.

At Woodland Hills Healthcare and Rehabilitation in Jacksonville, at least 24 residents and 24 staff members had tested positive as of Wednesday, according to a Health Department report.

That was up from seven residents and seven staff members who were listed as having tested positive a day earlier.

Meanwhile, the number of children at Methodist Family Health's psychiatric residential treatment center in Little Rock who have tested positive, as tracked by the Health Department, rose from 18 Tuesday to 31 Wednesday.

Methodist Family Health spokesman Kelli Reep said 11 staff members have also tested positive. That was up from two workers who were listed by the Health Department as having tested positive a day earlier.

Since the first cases were discovered over the weekend, all 38 children at the center have been tested, Reep said.

Those who tested negative are being housed separately from the ones who tested positive and are being retested every 24 hours.

Staff members who tested positive have isolated themselves at home.

So far, none of the children, and only one staff member, has had symptoms, she said.

With the children's movement restricted, "we have ramped up our recreational therapy," she said, including exploring options for using video technology to teach dance or other classes.

"We're doing everything we can so they're not just completely isolated and bored," she said. "We're trying to keep them as engaged as possible and still maintain their safety."

The number of cases that were considered active, meaning the person tested positive and had not yet recovered, rose by 93, to 2,208, as the number of recoveries increased by 150.

Even before kicking off the effort to test all nursing home residents and staff members, Arkansas officials said they have had success in containing nursing home outbreaks through a "rapid response" strategy that has involved testing all residents and workers at a home where an infection has been discovered.

Among states and the District of Columbia, that was the 15th-lowest rate in the country.

Arkansas' death rate, six per 1,000 nursing home residents, was the 13th-lowest in the country.

The national rate was 27.5 deaths per 1,000 nursing home residents.

Arkansas was also among 11 states with no covid-19 deaths among nursing home staff members.

Its rate of 13.9 infections among staff members per 1,000 nursing home residents was the 11th-lowest in the country.

The national rate was 39.5 infections among staff members per 1,000 residents. 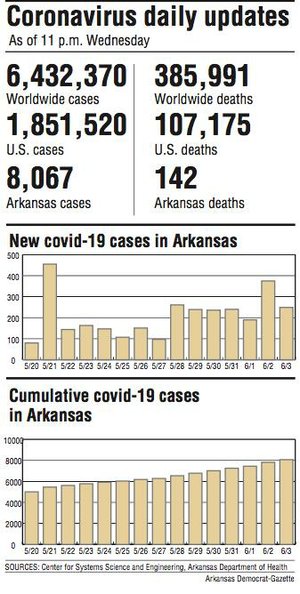