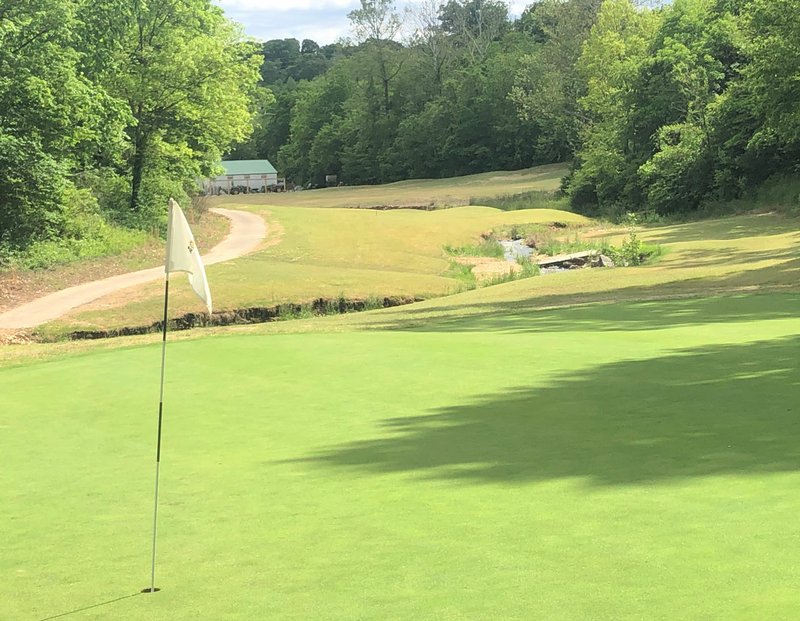 Rick Peck/Special to The TIMES Looking back down the fairway on the 12th hole at Big Sugar Golf Club in Pea Ridge. The signature hole requires a second shot of 200 yards while avoiding woods on both sides and water down the middle.

When you ask golfers what is their favorite course, you seldom get a definitive answer.

They have their favorites, but coming up with just one is usually not forthcoming. They like this one for this reason and that one for that reason.

Not me. My favorite unequivocally is Big Sugar Golf Club in Pea Ridge.

Admittedly, I haven't played a lot of courses, especially outside the four-state area, but of all the ones I have played, Big Sugar tops my list.

Aesthetically, Pea Ridge doesn't measure up with a lot of the area courses. It is not manicured like the courses in Bella Vista nor is it visually appealing like any of the courses you see on TV.

The water has washed out bridges, ripped up cart paths and piled up gravel along the banks of the creek and spring. The course replaces the bridges and fixes the cart path to make them passable, but they look as though they have gone through a bunch of floods, which they indeed have.

But don't let your first impression fool you. The course itself is well maintained with the exception of some tee boxes that are in various stages of getting redone. A recent tree cutting program will allow more sunlight to these areas to facilitate better growth of grass.

Bunkers aren't playable so you get free relief, but the bunkers are the least of your worries at Big Sugar.

It doesn't take long to see what makes Big Sugar so special. The first hole is an ordinary par 5. It is long (528 yards from the senior tees) with the creek down the right and woods to the left, but the fairway is wide and the hazards shouldn't come into play.

But number two is a complete opposite. It is short (316 yards from senior tees), but don't let that fool you. The fairway is guarded by woods on both sides (rough is not a problem at Big Sugar -- you're either in the fairway or out of play on most holes) requiring an accurate tee shot.

The tee shot can be played with anything from a 5-iron to some type of a fairway wood or hybrid in order to lay up for the second.

A layup is required because the hole doglegs at an almost 90-degree angle at about 200 yards. You have no idea there really is a green somewhere on this hole. Like several holes on big sugar, you cannot see the green from the tee box.

Your tee shot must be to the left side of the fairway that narrows dramatically at the dogleg or you will be blocked out by trees down the right side.

The green is set between a ditch on the left and a bluff on the right so, just because you hit a good tee shot, doesn't mean you have routine par in the bag.

Once on the green, you might have a 75-foot putt over a steep slope. All the greens at Big Sugar are huge (a two-club difference on whether the pin is on the front or back), so getting your correct yardage is a must.

To finish the front 9, holes 3, 4, 5 are tree-lined on both sides but have plenty of room. Number seven requires a good drive and a medium iron or fairway wood over the creek.

Number eight and nine give you a breather before facing the back nine, the most diabolical in the area.

Number 10 is a par 4 that requires a second shot similar to number seven. Number 11 is a dogleg par 5 that can be reached in two, but the second shot must be threaded through a narrow opening over a spring -- a layup is the best option.

Now we get to number 12 -- the signature hole at Big Sugar. The hole is 395 yards from the senior tees. You hit your drive from the top of a mountain to the layup area. From the senior tees you need to hit a shot of 170-180 yards. The more to the right the better -- unless you go too far and then you are in a spring that cuts the hole in half.

After a good layup, you will have 200 yards to the hole. The spring that cuts the hole in half goes right up the middle of the fairway to the green before it wraps itself around the right side. Woods guard both the left and right side. Laying up is not an option. The sliver of a fairway on each side of the spring slope towards the water and any ball hitting on the short grass will end up wet.

Number 13 is a 130-yard par 3. You will either be putting or dropping a ball from the same spring that runs along the left side or from the hillside cliff on the right.

The next hole is a dogleg right requiring a drive that must carry at least 150 yards or so over a valley. Number 15 is a short dogleg right. You hit your drive 180 yards or so to a hillside so the drive will roll to the bottom, setting you up with a wedge straight up the hill. Leave your approach below the hole because you have no chance of stopping a putt coming back down the severe green.

Number 16 is a 130-yard par 3. The hazard for this hole is the green itself. On this day, I five-putted. That's not as bad as it sounds. My tee shot was pulled and ended up to the very left side of the green while the pin was on the right and to the back. My first putt was not hard enough and it caught a ridge and rolled to the bottom of the green about as far away as when I started. My second putt (I should have used a driver) straight up the hill came up way short, but it did manage to stay on top about 15 feet away. My third putt raced by the pin about four feet and then I missed the come-backer on my fourth putt.

So I had a triple bogey after hitting the green in regulation. That is so easy to happen at Big Sugar. You are having a good round and all, of a sudden, something will cause you to end up with a big number and there goes your good round.

The finishing hole is a short par 5. The drive is off the top of a mountain with trees down the left side. The green is guarded by water to the right and short. Birdies are possible, but so are eights.

Keeping score at Pea Ridge is totally different than most courses. Not only do you keep track of strokes, you keep track of lost balls. Anything under 5 is acceptable and if you have a zero for lost balls, it doesn't matter what your stroke score is -- you had a good day at Big Sugar. On this day, I had a 2 and an 85 with one "mulligan" on the back nine that gave me a 40 on the tougher nine of the two.

I never did a very good job of describing the number of hills you go up and down during a round. In addition, the contour changes on each hole that can have you hitting shots while seemingly standing on your head.

Even with a cart, playing 18 holes at Big Sugar is a workout. I'm not going for a walk when I get home today.

Print Headline: Big Sugar is definitely my choice of a favorite course