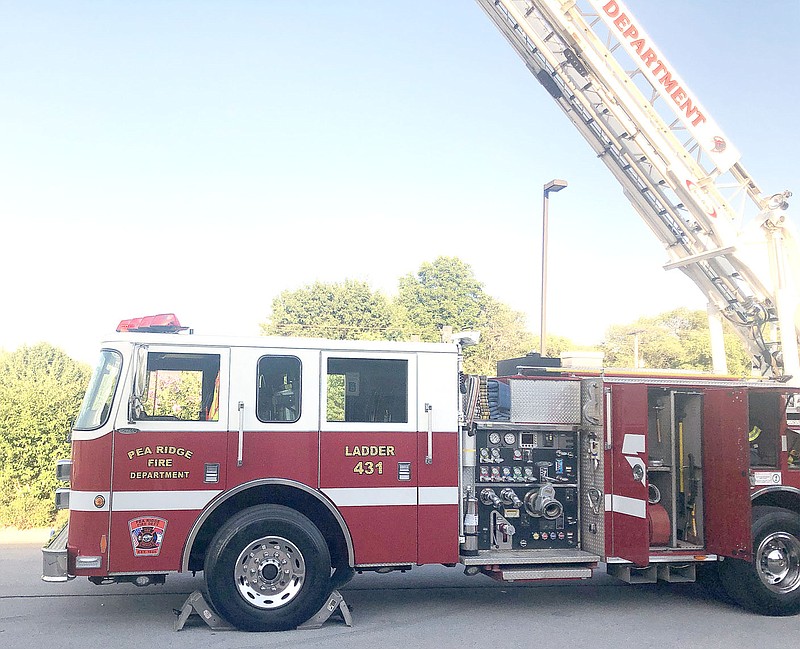 Polished and shining, the 2003 red and white 75-foot aerial ladder truck displaying "Pea Ridge Fire Department" and "Ladder 431" sat alongside Arkansas Highway 102 (Hudson Road) with the ladder raised and an American flag flying off the front of the truck, in honor of a deceased firefighter during the funeral processional in May.

"What really impressed me that I'd made the right decision and found the right home for the fire truck," Jenkins said, "was when I saw the fire truck ... obviously painstakingly cleaned, polished, all the vinyl lettering -- the detail, the ornate lettering.

"It made me feel, it symbolically indicated to me, that we'd done the right thing," Jenkins said "It was so refreshing to see them take care of that truck that's going to serve the citizens of Pea Ridge and greater Benton County, for many years. It was great to see! That's a legacy in the spirit of cooperation. We can help each other when we can foster collaboration."

"Tonight I am honored and privileged to present to you something we've been working on for a couple of years," Pea Ridge Fire Chief Jack Wassman said at the City Council meeting Tuesday, July 21.

"With the infrastructure and everything that's coming into this city, with the new school, potential apartment complexes, multi-level buildings," Wassman said city officials have asked how the fire department would be able to protect those structures.

He said the department received the truck and the firefighters immediately began working on it, removing the Rogers stickers, cleaning and buffing the truck. And when he was asked to put the truck in the funeral processional, he realized it did not have any department identification.

"I called Danny (Smith of Copy Cat Printing and Graphics LLC, Cassville, Mo.) and said 'I need help,'" Wassman recounted. "He came up here about midnight on Wednesday and worked all night and stickered that truck and got it done!"

"This is thanks to those guys out there (pointing to firefighters), they are the ones who spent hours and hours cleaning that truck and convinced Chief Jenkins to give Pea Ridge that truck," Wassman said. "Those guys love that truck!"

"Throughout my career, 28 years, I've seen some sharing between departments, but nothing is as big as this ladder truck," Wassman said.

Explaining the background of the donation, Wassman said he and Jenkins had been discussing a permanent loan of the truck.

Jenkins said there is a long history of cooperation between his department and smaller departments and that several Rogers firefighters are leaders of volunteer departments in smaller communities -- Pea Ridge, Avoca, Little Flock and Garfield.

"Jackie's a long-time firefighter here in Rogers... and has really developed himself to be a well-respected leader in the industry," Jenkins said of Wassman.

"It was obvious he had a lot of passion to make the Pea Ridge Fire Department better. He had a vision for what they needed to do," Jenkins said.

Jenkins said that thanks to a bond issue passed in Rogers in 2015 to replace fire trucks, the department was afforded an opportunity to look at surplussing one of their ladder trucks.

"It has a lot of life left in it," he said. "We had an opportunity to help them."

In a video presentation, Mayor Jackie Crabtree said: "On behalf of city of Pea Ridge, the fire department ... thank you so much. This is going to enable us to get to the next step. It's a tremendous thing y'all have done for the city of Pea Ridge."