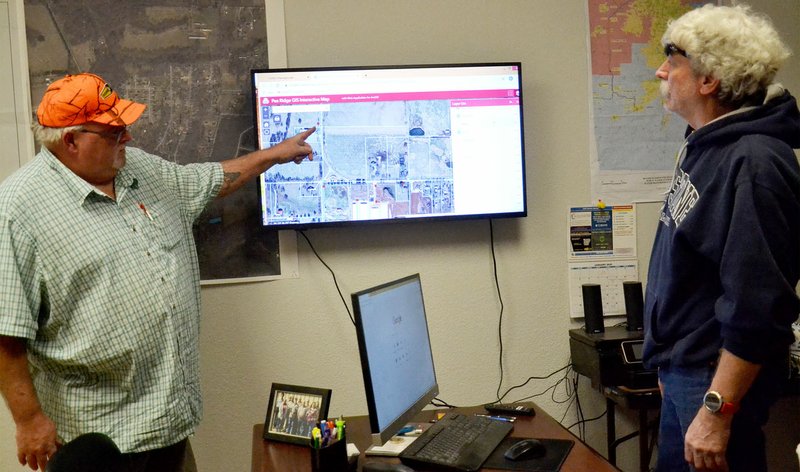 The Pea Ridge Water/Wastewater Department is using cutting-edge technology to keep up with the ever-increasing demands of a growing community.

Department head Ken Hayes and inspector Mike Nida have worked with free software and programs for the past 13 years to map the city's water and sewer lines and the entire infrastructure. The department recently purchased Esri software and used it to make available GIS interactive maps to the public. It is accessed through the department's web site https://www.pearidgewater.com.

"With this program," Nida said, "a lot of engineers don't even need to call us anymore."

"Esri -- they're the leading edge, as far as geographic locations," Hayes said. "We were using free stuff," he said, adding that in 2006, with a grant from Walmart, they were able to purchase a GIS locator which was "new technology back then."

"We started shooting meters, water mains, manholes, hydrants -- people weren't doing it then," he said. Providing GIS location information on fire hydrants was helpful to the Fire Department, Hayes said, and as technology improved, so did information available on the system, including amount of flow per hydrant.

"Right off the bat, we were able to get free software. Mike (Nida) figures out ways to make it work and we never spent money on software (before)," Hayes said.

"We went online about five years ago but that wasn't as good as the program we've got now," with the purchase of Esri in 2019, Hayes said.

"I'd rather have Mike here than a high tech millennial," Hayes said.

"I can tweak and fine tune it with Esri," Nida said.

"With this investment, we're in a new league," Hayes said. "Basically, we had 13 years of working with this and not spending any money."

"Since then, engineers and realtors, they use the heck out of it," Hayes said. "They just love it."

Hayes explained that developers present their plans to the city's Planning Commission and those plans can now easily be overlaid on the department's map to show access to sewer and water lines as well as showing the current topology, contour lines and what the area would look like after the development is in place.

"With this, it goes much deeper than just having what we're looking at. We can design, like at a Planning Commission tech review," Hayes said. Drainage flow is easily shown with this map system. "We could design a line without having the whole system surveyed."

But, this didn't happen overnight, Hayes explained saying that the department's employees have worked diligently over the past 13 years using the GIS locator to shoot every water line, every sewer line, every meter -- "everything in the infrastructure has been shot."

"When you have that, you have the backbone to go into newer programs," Hayes said. "With this program, we have a record of the system that will go on and on and we will be able to continue to build with it."

Hayes said that when he began working at Pea Ridge in 2005, although there was a record of the system, some information was missing.

"We had archives, but a lot of things, we didn't have a clue," Hayes said of the old files on the system. "What we have now is tee totally different. Very seldom do we not know where a line is."

"The guys in the field have access to the system," he said explaining that if something is not in the place where a file showed it to be, they would shoot it and correct the information. "Ten feet makes a lot of difference to us. It's very much a work in progress ... we've been getting the files tweaked in. With Esri, we're taking it to a new level."

"This department, we've done a lot," Nida said, praising the work of the employees in the field. "This system couldn't be were it is now with the entire department -- all the way down to the guy standing in the mud, shooting the manhole that he just dug out."

Hayes said engineers send their CAD files to his department and they are immediately overlaid on the map.

Once an engineer sends an electronic copy of the plans, Nida can print it and show what the terrain will be both before and after development. "It definitely helps them a lot," Hayes said.

"My objective is to get this where people can go online and see what their usage is," he said. "We can do it on the field now."

"Our objective is to get in a position where we don't have to come back on the backside... we're just trying to stay ahead of the curve.

"We're fixing to get hammered again," Hayes said of the approaching growth in the community. "We're trying to get ready for the boom."

"People are impressed with this -- that we are where we are and he's (Nida) a key player in that," Hayes said.

"When me and Ken started this," Nida said, "This department's locate maps were hand-me-down drawings."

Hayes and Nida both commended Elizabeth Bowen with Northwest Arkansas Regional Planning for introducing them to the technology and assisting them as they learned more about it. "She has helped us tremendously," Hayes said.

Showing off a small hand-held device, Nida said the new GIS locator is much easier than the one they used in the beginning.

Nida said the county's locator was a backpack unit with an antenna.

"Most people aren't in as deep a we are," Nida said, adding that some municipalities spend thousands of dollars on technology and they worked on it virtually cost free until the 2019 purchase of Esri.

"It's more of a service than anything else," Hayes said of making the interactive map available to the public. The program allows a user to select what is to be shown including fire stations, schools, cemeteries, parks and parcels. It can also show the city limits, the school district limits, the water department area, law enforcement districts, voting precincts, zoning, and districts for elected officials such as justices of the peace, constables, senators and representatives.