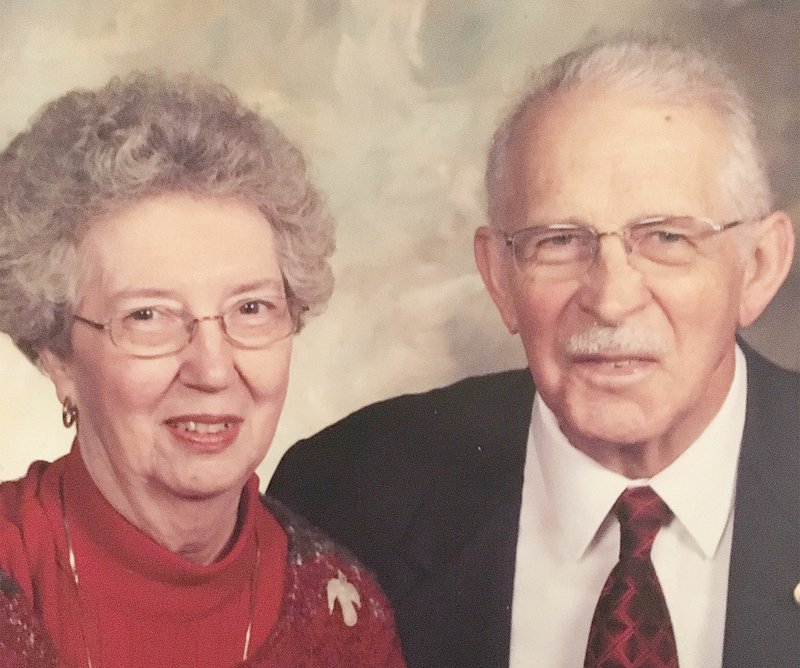 Nancy and Jerry Nichols will both be observing 80th birthdays on Jan. 4, 2020.

Their son Jeff and daughter Jennifer are hosting a birthday celebration on Sunday, Jan. 5, 2020, and are inviting friends and neighbors to join in a birthday reception from 1 to 2:30 p.m. Sunday. The reception will be held in the Fellowship Hall of the Pea Ridge United Methodist Church, 1209 N. Davis St. in Pea Ridge. Everyone is invited to come share in the celebration.

Jerry Nichols was born in the early afternoon of Thursday, Jan. 4, 1940, to Russell and Eunice Nichols, who lived on the farm north of Pea Ridge on the road to Jacket, Mo. The road is known today as Hayden Road. The attending doctor at the Nichols home was Dr. L.O. Greene of Pea Ridge.

Nancy Patterson was born about two hours later, the same afternoon, to Ray and Zula Patterson, who lived on their farm northeast of Pea Ridge, across the hill east of the Nichols' farm. Their road is known today as Patterson Road. Nancy's attending doctor was Dr. Edwards from Rogers. Both Jerry and Nancy attended Pea Ridge schools, with Jerry graduating in 1957 and Nancy in 1958. Both then attended college for a short time at the University of Arkansas in Fayetteville. Jerry then worked for a couple of years as an automobile mechanic at the Burger Motor Co. in Bentonville, while Nancy helped her father at home as he went through a time of temporary disability.

Jerry and Nancy began dating after being asked to be co-chaperones for a school class outing involving Jerry's brother John and Nancy's sister Linda. They were married on Jan. 8, 1961, at the Pea Ridge United Methodist Church. They lived for short periods in an apartment in Bentonville, on Nancy's grandparents' farm northeast of Pea Ridge, and on the T.O.C. Murphy Orchard Farm between Bentonville and Rogers. Their first child, Doyle Jeffery Nichols, was born on Halloween, Oct. 31, 1961, while the family lived on the Patterson home place.

Jerry became a Methodist pastor in June 1962. The family moved to Oppelo, Ark., south of Morrilton, and Jerry enrolled as a student at Hendrix College in Conway. In 1963, Jerry's pastoral work took the family to Conway, Ark., where he joined a team of four ministers serving 13 churches in the surrounding communities. Jerry and Nancy's second child, their daughter Jennifer Kay, was born during the move from Oppelo to Conway, on June 12, 1963. Jerry graduated from Hendrix College in May 1965, and the family moved to Kansas City, Mo., where Jerry would pursue graduate studies at the St. Paul School of Theology.

While in Kansas City, Jerry served as minister of Visitation for the Grand Ave. UMC in downtown Kansas City, and later as pastor of three rural churches in southern Iowa. After his graduation from St. Paul School in 1969, the Nichols moved back to Arkansas, where Jerry became pastor of the Wheatley UMC and Salem UMC in the east Arkansas delta. In June 1969, Jerry was ordained as an elder in the North Arkansas Conference of the United Methodist Church. Through the years, service in the churches of north Arkansas took the family to numerous Arkansas communities, including Alma, Atkins, Searcy, Berryville, Jonesboro, Piggott and Augusta. Along the way, Nancy was a homemaker, election official, and part-time secretary. About 1980, she began making sourdough bread, and Jerry is known to many of the church people as that pastor whose wife made that bread!

In 2002, Jerry retired from pastoring churches to be able to help with his mother's care, and Jerry and Nancy moved back to their home town of Pea Ridge, making their home on Patton Street. Back in Pea Ridge, they are active in the Pea Ridge United Methodist Church, where Jerry serves as minister of music and as a Sunday School leader. They are also involved in the Pea Ridge Historical Society, the Pea Ridge High School Alumni Association and are charter members of the Pea Ridge Lions Club.

The couple's son, Jeff Nichols, did his high school work at Atkins, Ark., and is a graduate of the University of Arkansas with a degree in Agronomy. He is married to Mary Doud, a native of Stuart, Iowa, and they live on a farm between Ames and Boone, Iowa. Both have pursued careers with the U.S. Dept. of Agriculture.

Daughter Jennifer is married to Bill Caldwell, who grew up at Salem, Ark. Jennifer has had a varied career, as a day care director, as purchasing agent for the Comprehensive Learning Center of Jonesboro, and currently as office manager and insurance officer for the NWA Rehab and Wellness Center in Springdale. Bill and Jennifer now live on the Nichols' home farm north of Pea Ridge. Bill is ag teacher for the Southwest R-5 High School in Washburn, Mo. Bill and Jennifer have three grown daughters, Shannon, Emily and Micah. Shannon is married to Tim Lamb, and they live in Paragould, Ark. Tim is a coach for the Paragould schools, and Shannon is employed with an antiques and jewelry store in Jonesboro, and pursues painting as a second career. Emily is a college student at Brigham Young University in Utah, is married to Quentin Seavers, who has a career in marketing. Emily probably will pursue a career in child development. Micah is currently a student at U of A, Fayetteville, and expects to pursue a medical career.

Editor's note: Jerry Nichols, a native of Pea Ridge and an award-winning columnist, is vice president of Pea Ridge Historical Society. He can be contacted by e-mail at [email protected], or call 621-1621.

Print Headline: The Nichols are both turning 80