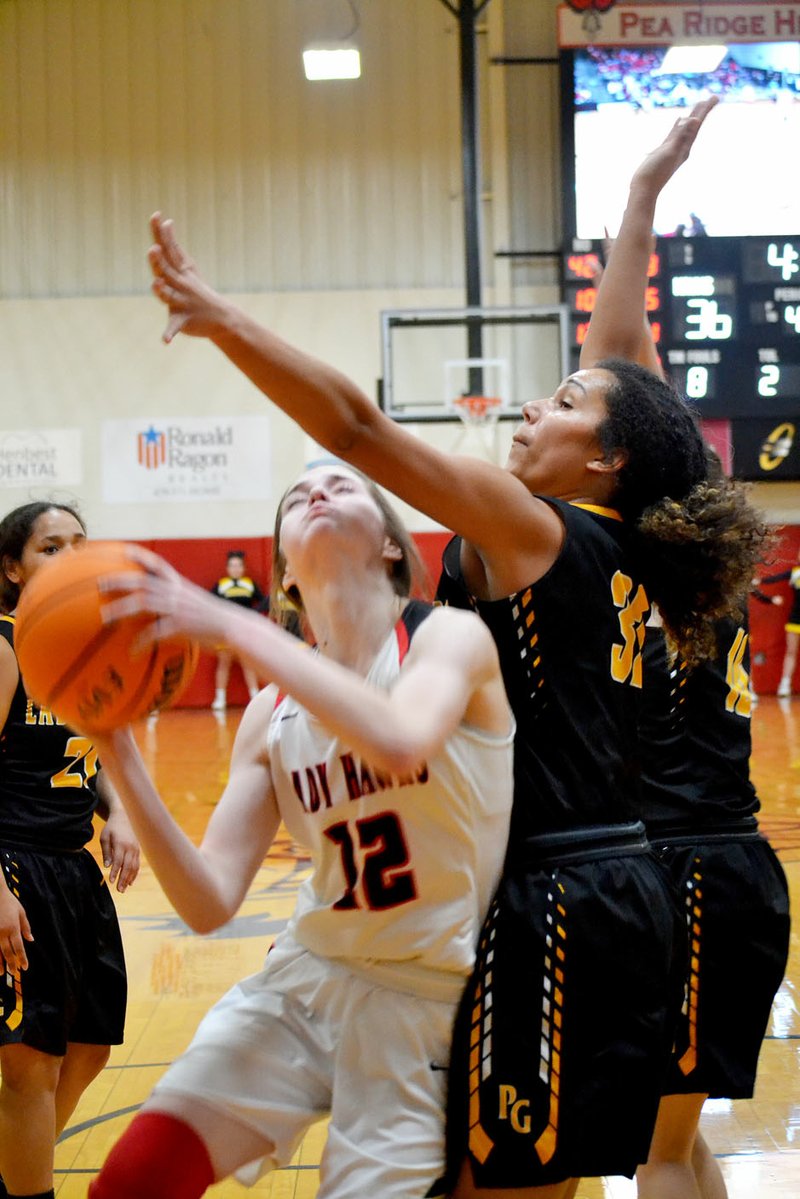 After falling behind early, the Lady Hawks came back in the second half to post a hard fought 41-37 win over the Prairie Grove Tigers. In the boys games, the Hawks jumped on their guests from the outset and built an insurmountable lead in posting a 62-46 drubbing of Prairie Grove.

The boys win clinched an outright 4A-1 West championship title as they moved their league mark to 10-0, far ahead Farmington's 6-4 mark, the division's current 2nd place team. The Lady Hawks have a likely lock on the division's 3rd place with their 4-6 conference mark.

Girls coach Heath Neal remarked "We didn't get the start we wanted, and when we lost our leading scorer (Blakelee Winn) in the 3rd quarter, our girls kept their cool. They ground it out, forcing turnovers on the Tigers, displaying a lot of maturity and poise to get the win. We had a lot of heroes, with Alyssa Short having a great game with heady play from Aidan Dayberry, Lauren Wright, Ravin Cawthon and Josey Goldberg along with Hayley West coming off the bench make some great plays."

Trent Loyd, the Hawks skipper, "This team has been so fun to work with this year, they work so hard to improve. They come out well on defense and share the ball extremely well every night. Every night if someone is down or out, there is someone to pick them and the team up. We have already win the division but these boys are hungry. They have, and will continue to get better on both ends of the floor."

This week marks the last week of conference play with the Hawks having hosted the Huntsville Eagles last night before the regular season ending matchup with the Gravette Lions on the road. The following week will be the 4A-1 District Tournament. The boys, by virtue of their title, have been seeded into the semifinals, thus guaranteeing them a spot in the 4A North Regional Tournament the following week.

The boys from the Ridge raced out to a big lead in the first period and were never headed on route to their 18-point final victory. The game was marked by outstanding plays on offense by the Hawks along with defensive gems by the locals before a loud and supportive crowd of Blackhawk fans in the annual Colors Day festivities.

After a Wes Wales' layup, the Hawks took an early 2-0 lead until the Tigers' senior Alex Edmiston tossed in a trey to give the guests a 3-2 lead. However, a Brandon Whatley layup 10 seconds later erased that lead and the Tigers would never be in front again. Graydon Edwards pulled off a steal shortly afterwards and drove it in for a layup, and not long after that Whatley scored another layup to give the surging Hawks a 8-3 lead. Whatley followed that up with a two for two performance from the line, with Jarod Brewer stealing the ball again, this time moving to the arc to rip a 3-pointer and give Pea Ridge a 13-3 advantage.

The Tigers' Sloan Smith and Edmiston both sank field goals to cut the lead by 4, but Edwards responded with a trey in the closing moments of the quarter with Hunter Rains controlling the ball out front with the clock inside 10 seconds. His Rains dance kept the defense on him so when he flipped a pass to Wales on the perimeter, he was open to sink a 3-pointer as the buzzer sounded, leaving the Hawks on top 19-7.

Wales made another layup to start the second quarter, then closely guarded Noah Peterson got off a quick shot to drain a trey and threaten to turn the game into a rout, with the Hawks pushing ahead 24-7. Prairie Grove's Smith stopped the Hawk run with a pair of freebies, then a peculiar foul was called on Peterson from a referee across the gym with the referee adding another foul to make it a double foul, putting Peterson out of the game with four fouls not even halfway through the second period. Later, this same referee tossed a Blackhawk fan from the gym for making loud comments, though not vulgar or obscene.

After the Tigers' Carl Von Bergen hit one of the two technical foul shots, Edwards took a great pass from Rains to rip a 3-ball for the Hawks' biggest lead at that time 27-10. The Tigers' John Mayers came back with a trey and two free throws to trim the lead by 5, but Rains pulled off consecutive steals out front, driving them in for layups, one of which was a reverse layup that he was fouled in making. He sank the free toss to put the Hawks up 32-14, their biggest lead. The Tigers' Noah Ceniceros scored on a rebound with Edmiston canning a short jumper, but Rains kept up the pressure, nailing a trey as Pea Ridge cruised into the half with a formidable 35-18 lead.

Edmiston and Meyers combined for three free throws to begin the third but Rains' 3-pointer and short jump shot further behind as the Tigers trailed 40-21 with 6:17 left in the quarter.

A minute later, the Tigers' Von Bergen hit a trey. Rains struck again, stealing in the front court and was fouled on the way in to score. The senior guard swished both shots. Down on the other end, senior center Wales executed a perfect blocked shot, but a referee who didn't see the play called a foul anyway, with Edmiston making one of two. Moments later, senior Mazon Harris saw Wales streaking for the basket, with Harris delivering up a pass that led to another Hawk layup and the biggest lead of the night at 44-25 midway in the third quarter.

The Tigers had a bit of flurry toward the end of the period with Edmiston and Smith combining for three buckets but Peterson blunted that mild comeback with a trey and two free throws as Pea Ridge led going into the fourth quarter with a 49-31 lead.

Wales led the charge into the fourth, with two buckets in the paint and a pair of free throws keeping the Tigers at bay. Blake Gardner, Edmiston and Ethan Gross all made layups with Gardner also two for two from the line. Rains' two freebies and a Peterson layup just before the 2-minute mark iced the game with the Hawks leading 59-39. Both benches were cleared with Jake Ingram scoring the last goal for Pea Ridge and Joe Adams hitting the last free throw. The Tigers threw in two trey shots in the final minute before the game ended with the Blackhawks claiming the victory 62-46.

Wales was designated the Nighthawk player of the game for his defensive efforts, with Rains and Edwards sharing the Flashhawk designation for their efforts on offense.

The first quarter was fought tooth and nail with the first buzzer sounding as the teams were locked in a 7-7 tie. A Ravin Cawthon free throw started the Hawks scoring, and a trey by senior Allisa Short offset layups by Price and Wynos as the teams started tied 4-4 at the 2 minute mark in the first. Hayley West put the Hawks up 7-4 with 1:39 left in the quarter but the Tigers got one free throw from Price and two from Wynos to send the teams into the next quarter deadlocked.

Wynos hit a jumper to start the second with teammate Preston following with a trey to bump the guests ahead 12-7. A Blakelee Winn layup and solo free throws by Aidan Dayberry and Winn put the gap to 12-11 with 5:40 left in the half. A Short free throw eventually tied it with a steal, layup and subsequent free throw by Winn grabbing Pea Ridge the lead at 15-12 with 3 minutes left in the half. Winn would hit another free throw in the final minute but the Tigers would use a layup by Wynos and a layup and free throw by Harrel to take a 17-16 at the break.

Short started the Hawk offense with a jump shot and two free shots but the Tigers responded with a Wynos layup and a Dobbs' 3-pointer to expand the lead to two at 22-20. Winn then flipped the script with a rebound score and a free throw which was followed by a Dayberry trey to vault the Hawks into the lead at 26-22 with 2 minutes left in the third quarter.

The Tigers' Torres would tighten it with a layup and free throw, but Winn started a scoring surge by the Hawks with a 3-pointer. Cawthon then rolled in a layup running a full tilt, with a Dayberry free throw and another full tilt boogie layup by Cawthon who was fed by a great pass by Dayberry. The latter layup occurred just before the buzzer, giving the Hawks an imposing 34-25 lead headed into the fourth quarter.

Dayberry executed a terrific shot to give the Hawks their greatest lead at 36-25. With the Hawks losing some of their height with the loss of Winn the prior quarter, the fourth foul whistled on Short with 6 minutes left sent the senior leader to the bench until 3 minutes left. In the interim, the Tigers came up with six free throws and a couple of shots in close to score 10 unanswered points. The surge shrank the lead to just 1 at 36-35.

At this point, Short went back into the game, immediately making a layup to give the Hawks a little more room.

The Blackhawks then bore down on defense, with two Dayberry free throws and one by Lauren Wright being the only scores by either team until a Tiger layup with 7 seconds left and the game no longer in doubt.