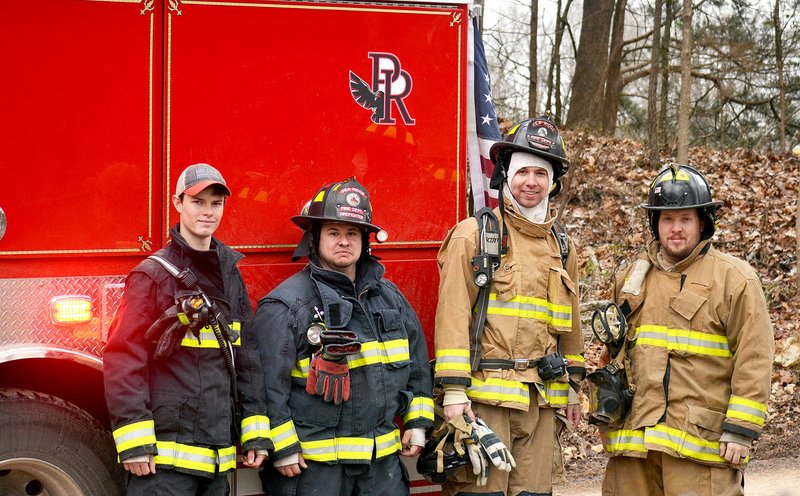 TIMES photograph by Annette Beard Pea Ridge volunteer firefighters Riley Heasley, Chris Perez, Ben Osowiecki and Shane Henson were several of the firefighters to respond to a structure fire on DeGraff Road involving a chimney fire recently. The fire trucks now have a Blackhawk decal on them thanks to permission from the school, according to Fire Chief Jack Wassman.

Following in his grandfather's footsteps, Riley Heasley is a volunteer firefighter. and was named firefighter of the year for Pea Ridge Fire Department this past year.

Heasley, 19, and Ben Osowiecki, 22, are two of the newest volunteers on the Pea Ridge Fire Department which is 100% volunteer.

"My grandfather was a fire captain in Lynn, Ark.," Heasley said. "He was there for 10 years. It was a volunteer department. He's taught me quite a bit."

Interestingly, one point his grandfather emphasized was to always carry a radio. "He drilled me on that."

Heasley, from Little Flock, is a home-school graduate, and said he worked at at a Scout camp on the medical staff and liked it so stopped by the Pea Ridge Fire Department station to ask about joining the department.

"I met Josh King and asked whether they needed volunteers," he said, and quickly began the application process.

Originally from Windsor, Connecticut, Osowiecki came to Pea Ridge via New Hampshire and Wyoming. He's been here since May 2019 and the opportunity to join the fire department was one of the factors that drew him to Pea Ridge.

Osowiecki went to school in New Hampshire where he met his girlfriend, followed her to Wyoming and then, as they both looked for where to settle, set aside stipulations such as "not a big city, close to her job and had to have a volunteer fire department." He said she received three good job offers and one of them was in northwest Arkansas. So, they moved here.

Osowiecki works as a full-time software engineer for a company from Boston and helps the department with computers as needed.

"Many people, especially if they are new to the area, drive by the fire house and see multiple vehicles in the parking lot, and assume that the fire department is a paid or a combination department (paid and volunteer).

"The Pea Ridge Fire Department does run an Advanced Life Support (ALS) ambulance that has paid members. These members, however, are not city employees, but are EMTs and paramedics who, for the most part, work for other municipal fire departments or ambulance services, and are working for the Pea Ridge Fire Department/Ambulance service as a part time job," Wassman said.

"The town I grew up in had a very large volunteer fire department," Osowiecki said. "I always thought it (firefighting) was cool. I was the only one excited when the fire alarm went off on school education days."

"I like to hang out with firefighters," Osowiecki said, laughing when Wassman said he was a firefighter groupie.

Heasley, who works at Ridout Lumber, hopes to earn a college degree in fire science.

"It's a good way to give back to the community that most people our age can't usually do," Heasley said. "Who hasn't wanted to be in the big red firetruck?"

"I get joy in helping people," Osowiecki said. "When people call us, it's usually a worst case scenario."

Both men said they've formed friendships both within the department and in the community.

"It's the most fun job you'll ever volunteer for," Heasley said.

Wassman said anyone 18 and older can apply and there are more opportunities than being a firefighter for volunteers.

"We have a lady who is doing photography for us," Wassman said. "There are all kinds of things we could use volunteers for."