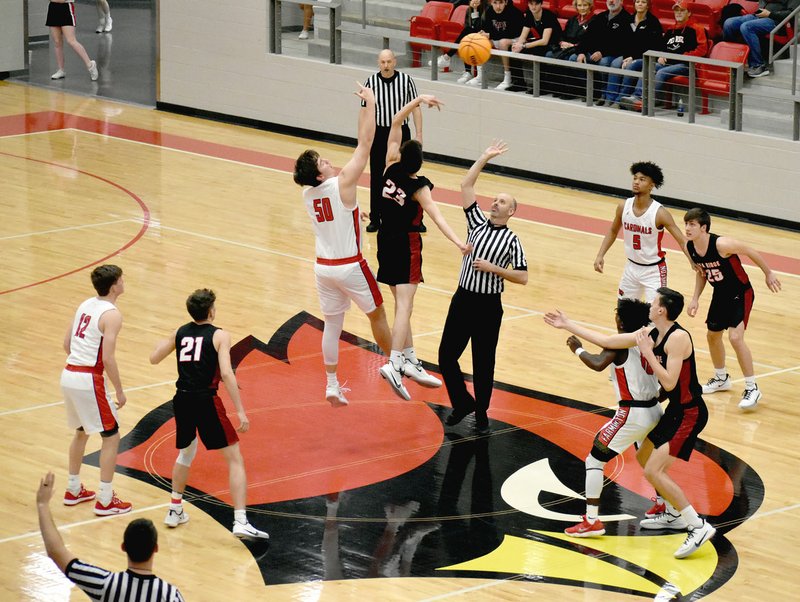 ​Trent Loyd's boys came from behind in another fabulous finish then won it in overtime 53-51 over the Farmington Cardinals.

The girls had a rough third quarter in route to their defeat at the state's No. 3-ranked 67-57.

The boys' victory cinched the division as they had a four-game lead on the Cards with only three games left in the season. The girls remain in third place with a 3-6 mark.

It was off to the races in the first quarter with both teams hitting lots of shots with the Hawks getting the better of the Cards to lead 23-21 after the first period. Blakelee Winn hit a trey, three buckets, and a free throw to lead the charge. Aidan Dayberry kept the fans cheering by sinking two field goals and two free throws. Ravin Cawthon nailed a trey, Allisa Short scored in close and Hayley West converted two of two from the line to complete the run out.

Farmington flipped the field in the second period, limiting the Hawks to 11 points while almost matching their first quarter explosion with 18 points, enough to give the home team a 39-34 lead at the break. Short, Dayberry and Cawthon all hit regular field goals with West ripping a trey. Cawthon also scored twice from the charity stripe.

The third quarter put the Hawks in a hole they could not fight their way out of, as Farmington outscored them 14-5 to head into the last period leading 53-39. A basket and free throw by Dayberry and a bucket by Cawthon was all the offense the Hawks could muster.

The Hawks' offense picked up considerably in the fourth period, as they outscored the Cards 17-13.However, it wasn't nearly enough to close the gap. Dayberry was the go to girl in the fourth, hitting two field goals, a trey and a free throw to lead the way. Winn chipped in with a pair of goals with Short hitting the other goal.

In a game Farmington led nearly the whole way, the fast closing Hawks again pulled one out of the fire, beating Farmington 53-51 in overtime.

In a polar opposite to the girls' game, the boys came out cold with Farmington eking out a 7-5 after one quarter. A pair of field goals from Noah Peterson and a lone free throw by Wes Wales accounted for the Hawk points.

Thing picked up for the Hawks in the second as they outscored their hosts 12-11 to creep to within one point at the half, trailing 18-17. Jared Brewer sparked the uptick in scoring with two treys with Peterson dropping in two more goals with Mazon Harris adding another.

The Cardinals regained the initiative in the third period, outscoring the Hawks 17-13 to assume a 35-30 lead going into the third quarter. Peterson carried the offensive load, ripping a pair of treys and a field goal with Brandon Whatley adding a trey of his own. Wales also knocked down two free throws in the quarter.

A team that is becoming known as a dangerous fourth quarter team, Pea Ridge tightened down on defense, limiting the Cards to just 8 points while ramming through 13 to tie the game and and send it to overtime. Whatley, Greydon Edwards, Hunter Rains, Wales and Peterson all scored goals in the effort with free throws by Wales and Whatley.

In the OT, the Hawks went to big man Wales and he delivered, dropping in three goals in close and converting two of two free throws. Rains' goal provided just enough offense to fight off the Cards and win the game by 2, 53-51.