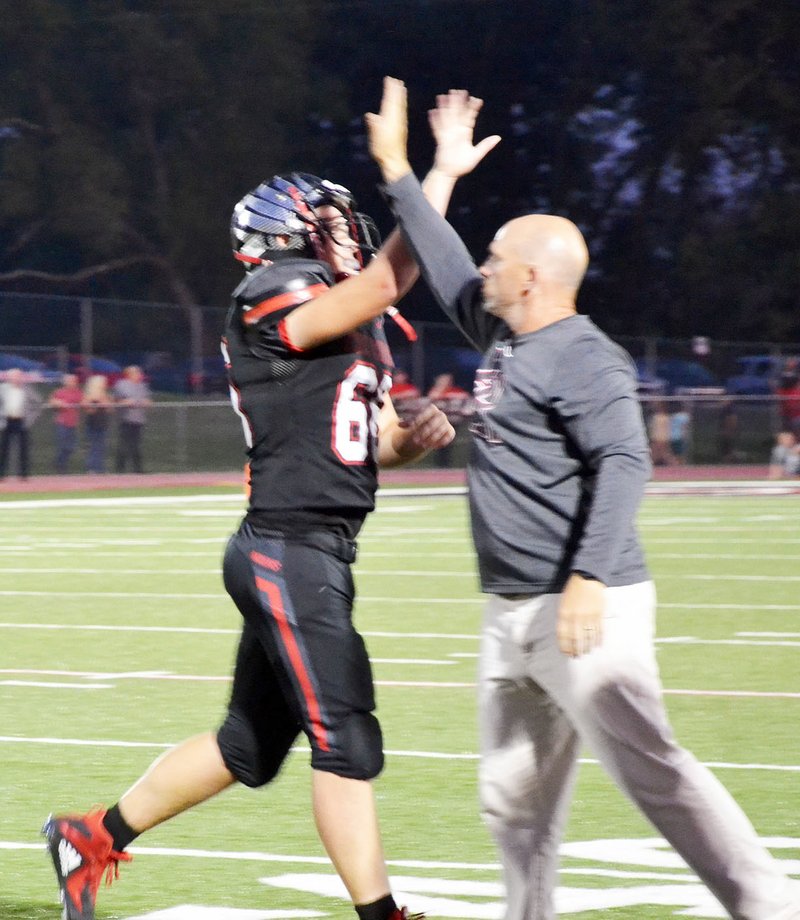 Superior speed by the visiting 5A Maumelle Hornets was more than the Pea Ridge Blackhawks could overcome as the guests made off with a 33-12 victory.

The injury bug bit the 'Hawks hard Friday night with several players on the sidelines. They were joined by starting quarterback Tate Busey who went down on a passing play midway through the second quarter with the 'Hawks trailing 7-6.

Maumelle scored in the closing moments of the half to take a 14-6 lead then scored twice more early in the third period to assume a 27-6 advantage. The 'Hawks came back to score late in the third but another touchdown by the visitors in the final period extinguished any hoped of a 'Hawk comeback.

Though only playing a quarter and half, Busey led the ground offense with 50 yards rushing on 10 carries, while also connecting on three passes for 28 more yards. Back up quarterback Zac Withrow completed seven of 11 passes for 74 yards. Tailback Samuel Beard rushed for 36 yards on 18 tries, with Daniel DeLeon totaling 24 yards on three carries.

Trevor Blair led the receiving corps with four catches for 98 yards, with Will Anderson catching three for 25 yards and Hunter Rains corralling three for 19 yards.

Gavon Warden led the defensive stats with six tackles with David Snarr finishing with five as did Lance Nunley. Logan Stewart had four stops along Jake Adams, Mazon Harris and Adam Trammel. Joe Adams finished with three tackles and Samual Tillman had two. The Adams boys (Joe and Jake) each recorded an interception with Tillman coming up with two fumble recoveries with Snarr and Nunley each getting one recovery.

Things started well for the 'Hawks with a little razzle dazzle almost giving the 'Hawks an early lead. Quarterback Busey lateraled to Raines who then threw down field to a streaking Blair who managed to travel 45 yards before being brought down on the Maumelle 28. Beard bashed the Hornet line for 4 yards on first down, but the visitors stiffened to stop the 'Hawks cold on the next three plays to take the ball back on their own 24.

Maumelle's Tayvion Williams took a first down hand off and dashed 56 yards down field for a new set of downs on the 'Hawk 8. A penalty on the Hornets and a subsequent sack of the Maumelle quarterback on the next play put the guests in the hole third and 24 at the 'Hawk 24. A pass from Zyon Slade to Williams nearly scored but the 'Hawks' Joe Adams stopped the run on the 'Hawk 5. Facing a fourth and 5, Slade tossed a 5-yarder to Brian Worsham who went into the end zone for the game's first score. The kick was good by Caleb Wallis for a 7-0 Maumelle lead.

The 'Hawks could not move the ball after the kickoff with Busey booming a 49-yard punt to the Maumelle 24. The Hornets then got off two plays that gained them 21 and 12 yards. Harris rained on their parade with a fumble recovery on the 'Hawk 42 with 4:58 left in the first quarter.

Neither team could move the ball subsequent to the kickoff until the 'Hawks got a drive going with 2:14 left in the opening period. Busey started things off with a 4-yard run with Beard gashing the line for 8 more yards and a first down on the 'Hawk 37. Two plays later the 'Hawks crossed into Hornet territory via a 20-yard run by Busey to the Maumelle 44. Raines and Busey contributed with a pair of 5-yard runs.

Busey ran 17 yards to get Pea Ridge into scoring position on the Hornet 17. Though the 'Hawks were hit with a pair of 5-yard penalties, a pass from Busey to Blair netted them 12 yards to the Hornet 14. From there, Busey threaded a pass through a crown of defenders in the back of the end zone. The ball found its way to Rains for a score with 8:20 left in the half, leaving the 'Hawks with a 7-6 deficit.

With less than two minutes left, the 'Hawks punted down to the Maumelle 39. A Hornet miscue led to a 12-yard loss back to the 27 but a short pass to Williams led to a 73-yard gain as the fleet Hornet back outran a host of defenders to score with a little over one minute to go. Wallis kicked the PAT for Maumelle and a 14-6 lead at the half.

Maumelle received the second half kick and quickly got into a second a 1 at their own 44. A pass from Slade to Louis Hartje eluded the 'Hawk defenders with the fast receiver darting 56 yards into the end zone. The kick failed but guests had posted a solid 20-6 lead with 10:55 showing.

The 'Hawks could not move the ball, leading to another punt with Maumelle starting another drive on their own 42. Jonathen Reyes flipped a 34-yarder to Williams, then followed that up with a 24-yarder to Williams to get back into the zone. With 8:37 left in the third, the guests had established a 27-6 lead.

The 'Hawks could not move the ball after the kickoff and Pea Ridge kicked the ball back on fourth down. Maumelle picked up a couple of first downs but could not take advantage of their field position with Blackhawk senior Lancy Nunley bursting in to cover a Hornet fumble and snuff out the threat.

The good fortune inspired the 'Hawks as 6-yard runs by both Rains and Withrow moving the ball into Maumelle territory at the 39. A Withrow pass that caromed off other players was snatched out of the air by Anderson to get a first down on the Maumelle 9. Rains dashed into the end zone on the next play to cut the lead to 27-12.

That would be the 'Hawks' last time to score with the visitors squeezing in one last score to set the final margin at 33-12.

The 'Hawks have an off week this week, then will travel for the year's first road game. They will visit the new Cardinal Stadium at Farmington. The Cardinals are coming off a 27-7 drubbing of Prairie Grove last week and hope to snap a four game win streak that Pea Ridge has built over their larger rivals.