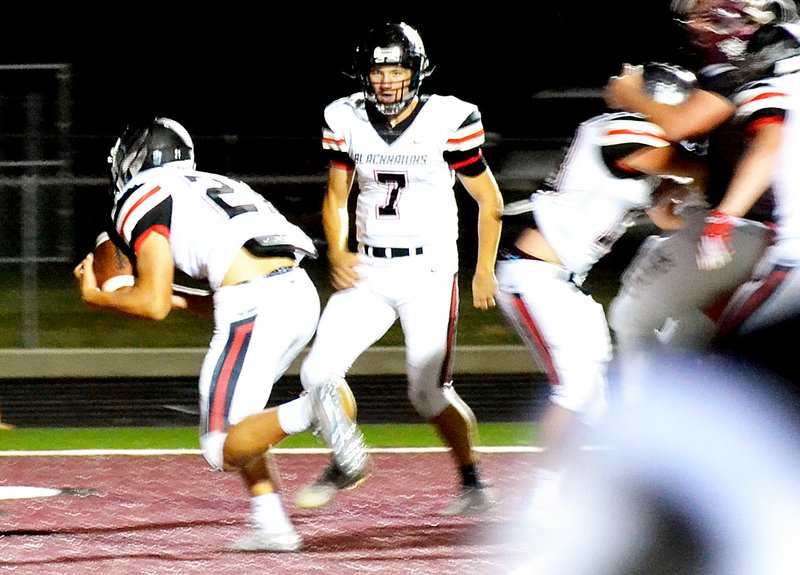 Stephen Neal's Blackhawk defenders threw up a brick wall on the road at Lincoln with senior Samuel Beard leading a bruising ground game as Pea Ridge stayed atop the 4A-1 district standings with a 55-21 win over the Wolves.

"We wanted to get off to a fast start and execute well," Neal remarked, "and the boys accomplished that in a big way."

The Hawks started so fast, that they came to within a point of activating the mercy rule in the first three minutes of the second quarter. A failed PAT attempt left the Hawks with a 34-point advantage (41-7), one shy of the 35-point requirement. They played most of the second half a mere 1 point from shortening the game.

Beard led the offense with 189 rushing yards, 80 of which came in the first game's five minutes. Senior Tate Busey was very efficient, racking up 170 passing yards on a six of nine performance. Busey also contributed 76 yards rushing on eight carries. Daniel Deleon, senior, carted the ball 14 times for 50 yards. Junior Zac Withrow has the most receiving yards with 57 while senior Hunter Rains has 53.

Beard rushed for the game's first four plays, picking up 58 yards on runs of 20, 21, 14 and 3, giving the Hawks a second and 7 from the Lincoln 7. Expecting another Beard carry, the Wolf defense swarmed Beard on second down with quarterback Busey faking a hand off, then rolling out left to run untouched into the end zone. Senior Luis Reyes applied the PAT kick to perfection and the Hawks were on top 7-0 with 10:43 left in the first.

The Wolves got 8 yards on a Brewer to Arnold pass to start Lincoln's first series but Hawk defender Gavin Warden, senior, burst through to throw the Wolves top rusher for a loss on second down. Two plays later Lincoln punted. The Hawks would go on to record seven tackles for losses on running plays and twice dropped pass catchers for losses as well. Lincoln finished the game with a negative 12 yards rushing.

Penalties put the Hawks in a hole on their next possession. Beard broke off a big gainer on first down from the Pea Ridge 25 but all but 6 yards were erased on a holding call. The Hawks were called for holding again on the next play, pushing them back to the Pea Ridge 14. Facing a second and 22 situation, the Hawks went to the air but Lincoln's Anderson cut through a passing lane, taking down the aerial and running it into the end zone with 7:45 showing. The kick was good, and suddenly the game was tied at 7-7.

To Lincoln's chagrin, the tie was short lived. Starting from their own 40, Beard crossed into Wolf territory at the 45. On the next play, Busey passed to Rains who reversed the field then outran the defenders all the way to the goal line to break the tie. Reyes' kick set the score at 14-7 with 7:06 showing.

The Wolves were three and out of their next possession with the Hawks taking over on their own 17 following the punt. Beard punished the defense with runs of 5, 3, 10 and 8 yards for a second down on the Pea Ridge 43. Busey flipped a pass to Withrow who negotiated the remaining 57 yards to paydirt for the Hawks' third touchdown. Reyes' kick was true and Pea Ridge led 21-7 with 3:45 left in the opening quarter.

The Wolves' next series was blown up by the Hawks, losing 3 yards to force a fourth and 13 punt. A bad snap led to a run by the punter and he was brought down on the Lincoln 19. A penalty on the Wolves placed the ball inside the 10, with Beard blowing into the end zone on the next play. Reyes split the uprights again for a 28-7 lead heading into the second quarter.

The Hawks rolled up 223 yards of offense in the period, with Lincoln losing 15 yards offensively. A big play by senior Mazon Harris to sack the quarterback for a 21-yard loss wiped out the positive yardage the Wolves had accumulated to that point.

The Blackhawks began the second quarter with a first down on the Lincoln 47. After a short run by Deleon, a pass Busey to sophomore Trevor Blair netted 8 yards and a first down on the Wolf 37. Deleon ran twice more for 1 and 5 yards, then Busey hooked up with Reyes for a 28-yard gainer to the Wolf 3. Deleon bulled it in from there with 9:34 left in the half. Reyes' kick was good and the Hawks led 35-7.

Things continued to go downhill for Lincoln. Senior Adam Trammel nailed the quarterback for a 6-yard loss, then senior Lance Nunley covered a fumble on the Lincoln 22. A Busey pass to senior Brayden Ralph picked up 17 yards to the 5 and a short pass to an exuberant Blair in the back of the end zone provided the Hawks' sixth score with 8:09 left in the half. The exchange on the PAT was mishandled so the score stayed 41-7, 1 point from activating the mercy rule.

Just a point away from having the game mostly evaporate in the second half seemed to motivate the Lincoln players. They pushed into Pea Ridge territory for a first down at the Hawk 42, but a sack by senior James Fort and Nunley caused a loss of 7 yards. A run by quarterback Tyler Brewer and a pass to Daytin Davis gave the hosts a first down on the Hawk 26. Brewer then floated a 26-yard bomb to Davis for a score. The PAT was good to cut the Hawk lead to 41-14.

Beard rushed for 38 yards on five jaunts to the Wolves' 24-yard line. Missed passes led to a turnover on downs and it took the Wolves just 23 seconds to score. Brewer threw successive 10-yard passes to Wright then Arnold, before the Lincoln field general lofted one down field to Arnold who scored from 56 yards out. The PAT was good to send the teams into intermission with Lincoln having a glimmer of hope, trailing 41-21 after scoring 14 consecutive points and having the ball first in the third quarter.

Lincoln had trouble getting started in the third quarter with Blackhawk senior David Snarr tipping away a Wolf pass that led to a punt. The Hawks then responded with an 11-play 58-yard march to the end zone to stamp out whatever hopes of a comeback Lincoln may have harbored.

Busey started with two runs for 11 yards, with Beard running two for 11 yards as well. Busey then ran for 6, Beard for 3, then Busey for 2 for a first down on the Wolf 25. Two plays later, Beard nearly went to the house, breaking free for 16 yards to the Lincoln 10. Beard got 7 more on the next play then Deleon punched it in from the 3. Reyes' kick was good and Pea Ridge led 48-21 with 6:22 left in the third.

Lincoln squeezed out eight plays to travel 34 yards to the Hawks' 46. A swarm of Hawks buried the Wolf ball carrier in Lincoln territory and the Hawks took over on the 43. It turned out to be a one-play drive for the Hawks as Busey kept the ball, playing bumper pool 43 yards to the end zone, avoiding tackles and eluding defenders. Reyes kicked it right down the middle for a 55-21 lead, the last score of the game with 3 minutes left in the third quarter.

The fourth quarter turned out to be an unhighlight reel as both teams turned the ball over on their first two possessions. The Hawks had the ball on the 5 and went for a field goal. The kick was blocked and Davis picked up the ball and ran it back over 80 yards before the Hawks stopped him on the 14. A penalty against Pea Ridge placed the ball on the 7. Nunley sniffed out a passing play and while it was complete, the Wolves got no yardage from it. Two plays later, Blackhawk sophomore Joe Adams intercepted a pass in the end zone to end the threat.

Three plays later the Hawks turned it back over to Lincoln on a fumble on the Pea Ridge 23. Again, the Wolves moved inside the Hawk 10, but again, a Hawk in the person of sophomore John Roses was there to intercept a pass to end the hosts' last scoring threat.

Nunley and Trammel led the defensive effort with six tackles each. Logan Stewart, Joe Adams, Jake Adams and Gavin Warden all had three stops each. The Blackhawk defense is developing into an iron curtain against the run, something that will help it greatly in their stretch run to the playoffs,

The game was likely the last time Pea Ridge and Lincoln will ever tee it up. The Wolves are heading into 3A ball next fall with the Hawks ascending into the 5A realm.

The win raised head coach Neal's conference mark to 20-3 since becoming the Hawks' skipper, best in the league. The next best record for 4A-1 coaches since 2016 is Shiloh's Jeff Conaway who is 19-4 over that same time frame.