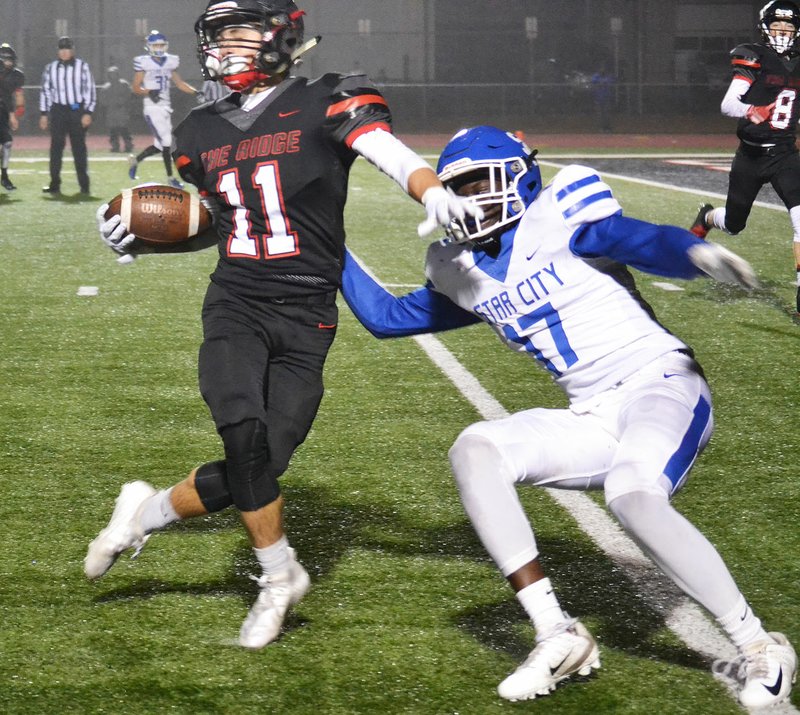 TIMES photographs by Annette Beard Senior Hunter Rains (No. 11) gathered in a Busey pass at the 5 to gain a first down, then twisted his way down to the 2 in the Friday, Nov. 22, second round of 4A-1 state playoffs game against the Star City Bulldogs in Blackhawk Stadium.

​The Blackhawks parlayed a tough third-quarter defensive effort to provide just enough to enable Pea Ridge to eke out a well fought 21-14 victory over the Star City Bulldogs in the second round of the State 4A Football Playoffs.

The boys from the Ridge broke a 7-7 halftime deadlock, forcing lost fumbles on the Bulldogs' first three possessions of the second half while scoring twice during that sequence of events to provide the final margin of victory.

"We saw two really tough football teams performing tonight," head coach Stephen Neal remarked. "Star City surprised us some with part of their offense, but we adjusted well to it. We had three takeaways with no turnovers of our own, which is what you have to do to win, especially at this level."

The win earned the Hawks the right to travel to Ozark next Friday night for a quarterfinal match with the Hillbillies. Ozark smacked Warren 41-17 to gain their berth.

The Hawks received the opening kickoff and looked to take an early lead when senior Samuel Beard broke loose on the game's fourth play to gallop 76 yards for a touchdown. A flag was thrown at midfield, however, and the play came back. Eventually, the Hawks had to punt with Star City moving the ball 40 yards to the Hawks' 22-yard line.

A sign of things to come occurred when the Hawks stiffened their resolve and pushed the Bulldogs back on three straight plays. A wall of defenders swept over the quarterback to ring up a 2-yard loss, followed by two straight quarterback sacks by senior Brayden Ralph pushed them back 15 more yards. After Ralph's second take-down which occurred on fourth down, the Hawks took over on their own 39.

Beard ran twice for gains of 5 and 6 yards to the midfield stripe, senior Tate Busey flipped a 14-yard pass to senior Hunter Rains to move the ball to the 'Dog 36. Beard ran twice for 5 total yards with Busey doing the same for a first down on the Star City 25. Beard then crashed through the line for 5 followed by a quick pass to Rains for 10 more yards and a first down on the 10-yard line.

Luis Reyes, senior, then ran up the middle for 4 yards followed by a pass to Ralph in the right flat for 6 yards and the game's first score. Deadly accurate Reyes split the uprights to boost the score to 7-0 with 8:47 left in the half.

The lead lasted all of 18 seconds when Bulldog Noah Nobles took a hand-off and raced 59 yards on the first play following the kickoff to score. Bryan Magana booted the PAT and the teams were suddenly tied again, this time at 7-7 with 8:29 left.

The fired up visitors forced the Hawks into a 3 and out, taking over after a 39-yard punt by Busey. The Bulldogs' potent running game was warming up as they moved from their 15 to their 46 in seven plays. With a short third and 1 facing them, senior Mazon Harris took the wind out of their sails with a big tackle for a 5-yard loss behind the line, forcing a punt. Neither team could move the ball before the intermission on this cold, wet evening.

Star City had the ball to start the second half and had a good gain on first down. On the second rush, the Hawks overwhelmed the running back knocking the ball loose with sophomore Joe Adams covering the ball on the Bulldog 46.

A first down pass from the 46 was interfered with by Star City, giving the Hawks a first down on the 36. On the next play, Busey threw a ball to Ralph on the sidelines which the lanky receiver caught and raced 36 yards down the boundary stripes to the end zone to put the Hawks back ahead. Reyes was again good on the kick and Pea Ridge led 14-7 with 10:48 left in the third.

Star City decided to rely on their star running back Adam Fonville, and he did not disappoint running four times for 46 total yards. However, senior Adam Trammel threw a clod into their churn when he smothered a sweep around end, ending in a 7-yard loss. In a short second and 2 from the Hawk 16, a fierce pursuit by the Hawk defense knocked the ball loose again with the Hawks taking over on their own 25.

Beard ran twice for 5 yards total, followed by an incomplete pass. The Blackhawks rolled the dice on a fake punt on fourth down deep in their territory with Busey hitting Ralph at mid-field with a pass, with the completion ending 55 yards later at the Bulldog 15. Beard had a short gain, with Rains gathering in a Busey pass at the 5 to gain the first down, then twisting his way down to the 2. A personal foul on Star City moved the ball to the 1, when Busey sneaked it over with 5:04 left in the third. Reyes again proved accurate and the Hawks led 21-7.

With the Hawks' stingy rushing defense, the pass aversion Bulldogs went to the air, striking for 28 yards with a bomb from Noah Noble to Dawson Edmonds for a first down on the Hawk 40. Two plays later the Hawk defense sent the Hawk faithful into loud cheering when their dislodged the ball again from a Bulldog running back, with junior Samual Tillman covering it on the Hawk 40.

Pea Ridge could not move the ball and a 42-yard punt by Busey sent the 'Dogs back to their own 25. The visitors moved the ball 13 yards to their own 38 before Ralph sniffed out a reverse and and took down the running back for a huge 14-yard loss. Now into the fourth quarter, the 'Dogs went for it on fourth down but a wall of defenders stuffed the fourth down play at the line of scrimmage.

Seeing their season about to run out, the Bulldogs played inspired defense and held the Hawks to a 3 and out. Busey punted the ball 43 yards to the Star City 13.

With their bread and butter ground game rendered ineffective, the Bulldogs again went to the air with a Noble to Fonville pass netting 15 yards to the 28. Fonville and McDonald combined to run twice for 11 yards to the 39 then the Hawks were hit with an unsportsmanlike conduct penalty, pushing the ball into Pea Ridge territory at the 44. A Noble pass to Grayson picked up 10 yards with a subsequent 29 yarder to Edmond scored Star City's second touchdown. Magana hit the PAT to close the gap to 21-14 Pea Ridge.

The Hawks still could not untrack the offense against the Star City pursuit and Pea Ridge had to punt to their guests, giving them possession on their own 26.

At this point, the Hawks' defense gathered itself to have perhaps the greatest four consecutive plays of the season.

On first down, the Hawks threw a maelstrom of pursuit at the Dogs with Ralph sneaking in to drop the ball carrier for a 3-yard loss. The Hawk defenders unnerved the Star City line to move early, resulting in a 5-yard penalty and a resulting second and 18 situation. On the next play, Ralph, Tillman and Reyes converged on the ball carrier to hand a 4-yard loss on Star City to set up a third and 22. Junior Anthony Bleything and Ralph then teamed up to force an even bigger 6-yard loss on the next play, pushing the Dogs way back to a fourth and 28 must-pass situation. The fourth down pass fell harmlessly to the turf from the Star City 42. The Hawks then went into victory formation to end the game.

Beard led the offense with 85 yards on 20 carries with Busey leading the way in the passing attack with 132 yards on a seven for 14 performance. Rains and Ralph both caught three passes with Rains' catches totaling 34 yards and Ralph garnering 97.

Pea Ridge will travel to Ozark Friday, Nov. 29, for a chance to get back into the state semifinals for the fourth time in five years. The winner of the Ozark/Pea Ridge game will then play the winner of Jonesboro Westside/Little Rock Robinson. Westside and Robinson were both conference champs so the winner of their game will host the semifinal contest.

The state 4A championship game will be played at War Memorial Field, Friday, Dec. 13, in Little Rock.