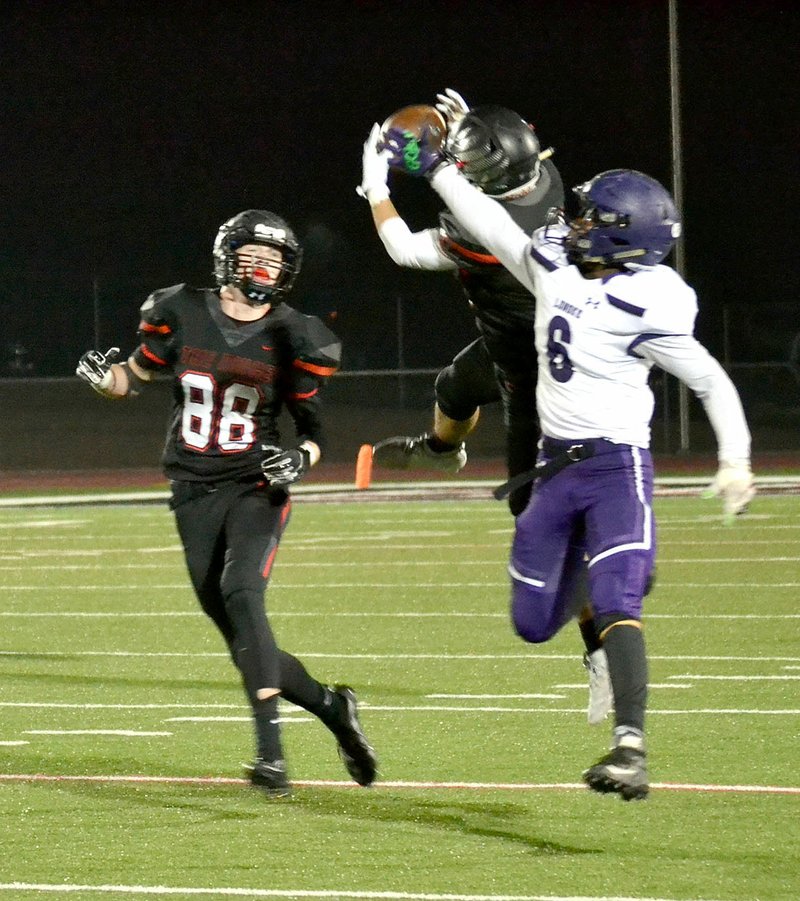 TIMES photograph by Annette Beard Early in the third quarter, Friday, Nov. 15, Lonoke's quarterback attempted to throw a wheel route. Blackhawk senior, defensive back/wide receiver, Hunter Rains (No. 11)intercepted the ball and ran it back for a 52-yard touchdown, allowing the Blackhawks to regain the momentum of the game, according to coach Stephen Neal.

A pick six by Hunter Rains and a trick six by Samual Tillman provided more points to the Hawks' column than Lonoke's offense did for theirs.

Head coach Stephen Neal was pleased with the result.

"We have a lot of work to do to prepare for Star City. But the boys played well tonight. Players stepped up and we played well on both sides of the ball," Neal said.

The players were as cold as the weather as the Hawks had 4 yards total offense after three possessions. Lonoke's first play was a disaster when a reverse was covered by a wall of Hawk defenders leading to a whopping 15-yard loss. The loss put Rabbits in the hole with -5 yards accumulated after their first two opportunities. A shanked Pea Ridge punt to start Lonoke's third possession, however, gave them excellent field position on the Hawk 42.

With the Hawks stuffing their ground attack, Lonoke decided to air it out with the first try incomplete and the second one complete but smothered by a withering defense. With a number of fleet footed athletes on the Jackrabbit roster, the third Spencer Pepper pass to Brenden White was caught in the open with the junior receiver racing 42 yards to score the game's first points. Diego Contreras booted the PAT to put the guests on top 7-0 with 2:41 left in the first.

The Hawks wasted no time responding. Senior Hunter Rains gained 20 yards on first down and the next play saw senior Tate Busey throw a perfect 45-yard pass play to senior Brayden Ralph who crossed the goal line with 2:16 showing. Senior Luis Reyes split the uprights on the first of seven straight PATS he would execute as the score was knotted at 7-7.

Linebacker Lance Nunley, senior, who had a season high 15 tackles, gave the Hawks excellent field position when he forced and covered a fumble on the Lonoke 31. The Hawks could not convert after coming up short on a fourth down play on the Rabbit 26. Lonoke went back to the Pepper/White tandem to gain 10 yards on a first down pass. The Hawks were ready on the next play which was a completion from Pepper to White but resulting in a 6-yard loss. Three plays later saw Lonoke punt to Pea Ridge at the Hawk 27.

A short second down pass to Rains led to a bigger gain when a Lonoke defender decided to target Rains, hitting the senior receiver in the upper chest with his helmet, adding 15 yards to the play on the penalty. If the penalty was committed to intimidate Rains, it failed as Rains caught another pass on the next play, netting 23 yards to the Lonoke 34.

After a couple of short gains by Samuel Beard, Busey went back to Rains and this reception was good for 10 yards to the Lonoke 22. Beard slashed his way 14 yards to the 9-yard line to nearly break loose and score. A fake to Beard on the next play saw Busey roll around the right end and dash into the end zone. Lonoke was hit with another unsportsmanlike conduct penalty on the score. Reyes' kick made it 14-7 with 7:30 left in the half.

Lonoke would keep the ball for the rest of the half, running 20 plays that would end with junior Jake Ingram intercepting a fourth down Lonoke pass to keep the score at 14-7. Lonoke drove the ball to the Hawk 10 when junior Anthony Bleything dragged down the Lonoke ball carrier on the Hawk 21 for an 11-yard loss. Two plays after this, facing a fourth and 6 from the 12, Lonoke tried a trick play, bouncing a pass backwards which resulted in a huge loss for the Rabbits when the Hawks weren't fooled and smothered the play. Officials ruled it a "do over" giving Lonoke one more chance, a chance that Ingram took away as time expired.

Lonoke took the kickoff to start the third kickoff after driving to mid-field, were forced to punt. The Hawks could not move the ball and a booming 54-yard punt by Busey flipped the field, igniting an avalanche of Hawk scoring in the process.

Starting from their own 36, the Rabbit offense could gain but 1 yard against a swarming Hawk defense and were forced to punt again. Beard started the next possession with a 3-yard run to the Hawk 31 where Busey connected with Ralph on the west sideline for 7 yards to the 38. Two plays later, Busey faked another hand-off then took off, sailing 62 yards to the end zone for the Hawks' third touchdown. Reyes' kick expanded the lead to 21-7 with 5:19.

Trying to catch up quick with a deep pass, Rains foiled the Rabbits again as he gathered in the errant pass, sprinting 65 yards behind a fast forming vanguard of blockers to paydirt just 9 seconds after their last score. Reyes was good and the Hawks were great, ballooning the lead to 28-7 with 5:10 showing.

Lonoke was not ready to call it a game, with Anthony Parks breaking loose for an 83-yard scoring run. Senior Blackhawk Mazon Harris broke through to block the PAT attempt and the Hawk lead narrowed to 28-13 with 3 minutes left in the third period.

The guests got their fans' hopes up by executing an on-sides kick to perfection, getting the ball back to Lonoke on the next play. The Rabbits' good feelings evaporated when Blackhawk sophomore Joe Adams intercepted a Lonoke pass at the Hawk 44.

Missing a golden opportunity fired up the Rabbits, and they hung 7 yards of losses on the Hawks' next series. Beginning from the Rabbit 26, Pepper had two runs totaling 32 yards to get them back into Hawk territory at the 42. The defensive line stiffened and two running plays netted 3 yards. A third down pass was broken up by Adams with Ralph stopping a fourth-down pass with an interception.

Now into the fourth quarter, the Hawks went to work with Busey opening with a 4-yard run, followed by a 33-yard pass on the sidelines to Trevor Blair, sophomore, to grab a first down on the Lonoke 21. Two plays later, Busey threaded a pass to Rains for another score. With 9:52 left in the game, Pea Ridge had an imposing 35-13 lead after Reyes' kick.

Nunley sacked Pepper again with, this time resulting in an 8-yard loss forcing another Lonoke punt. Lonoke had a brief reprieve when starting from the Lonoke 32, a Hawk pass near the end zone was intercepted by the Rabbits who set upon their own 5-yard line. A first down play was stuffed, and the second play saw Blackhawk junior defensive lineman Samual Tillman deciding to forego the sack and just take the ball, ripping the ball away and carrying it into the end zone with 7:01 left in the game, essentially icing the game. Reyes' PAT inflated the lead to 42-13.

In the Rabbits' last real chance to score, they did manage to move into Hawk territory but successive defensive gems by sophomore Logan Stewart, Harris and Nunley slammed the door on any chance of denting the scoreboard one more time,

Beard started the last Hawk drive with a 12-yarder, with Reyes following with runs of 10, 30, 2 and the final one of 2 yards to get in the last score with 1:47 left, commencing the mercy rule. The clock quickly ran out and the Hawks were assured of another home game.

Busey led the offense with 146 yards passing with seven of 11 passes, nine runs for 62 yards and two touchdowns. Beard gained 54 yards on 16 runs. Rains had 18 yards on two runs. Reyes gained 45 yards on five runs. In receiving, Rains had four passes for 60 yards, Ralph had two for 53 yards and Blair had one for 33 yards.

Nunley led the way on defense registering 15 tackles for the game. Ralph had 10 tackles; Harris and Adams had five each.

Star City thrashed Batesville Southside to earn the right to be the Hawks' next opponent. The 10th-ranked Bulldogs have been on a tear of late and will provide speed and athleticism to this week's Battle on the Ridge.