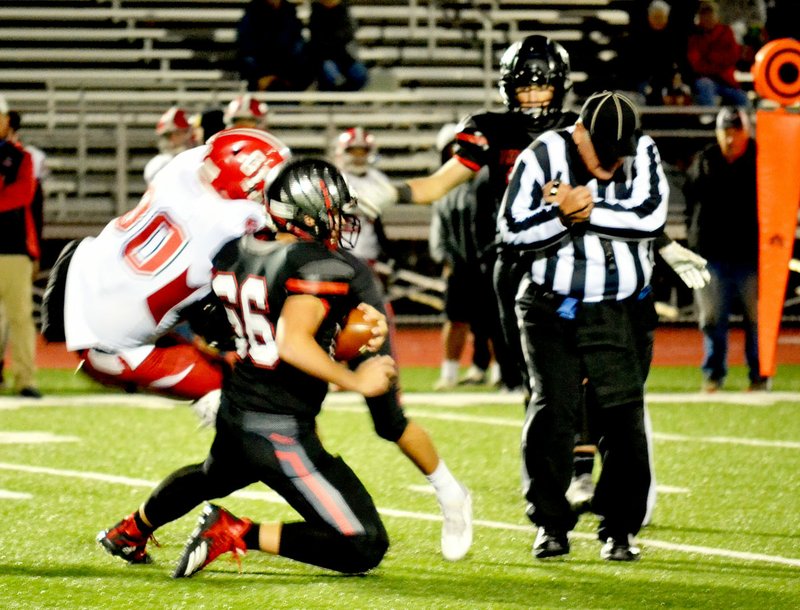 Most games when a team runs twice as many plays as their opposition and piles up more yardage, that team usually wins.

That wasn't the case last Friday as Pea Ridge needed but 28 offensive plays to blast Green Forest 47-14 in the Blackhawks' final regular season home game. In fact, the Hawks only ran nine offensive plays to race out to a 44-0 lead in the first quarter.

"Our offense played well, our special teams played well, and our defense played exceptionally well," Blackhawk head coach Stephen Neal related. "Everyone got to play, and we are ready to play for the league title next week."

Pea Ridge needed but 78 yards when they blew up the scoreboard in the game's first 9 minutes of playing time, racking up 37 points.

Senior Samuel Beard gave Green Forest a taste of what was to come as he took the opening kickoff at the 5-yard line and raced past Tiger defenders all the way to the opposite end zone for a 95 -yard touchdown return. Quarterback Tate Busey then threw the 2-point PAT pass to Brayden Ralph for a 8-0 lead with just 14 seconds off the clock.

The Tigers' first rushing attempt hit a brick wall and their second down pass was batted away by Blackhawk junior Samual Tillman. Senior Mazon Harris sacked the quarterback on third down for a 4-yard loss to force a punt, and the rout was on.

Beginning from the Hawk 37, Beard burst cross mid-field for 17 yards and a first down on the Tiger 46. Senior Luis Reyes ran for 5 then 8 yards for a first down at the 33. From there, Busey lofted a pass to senior Brayden Ralph who took it in to score with 8:42 left in the first period, boosting the score to 14-0.

The Tigers' next possession went nowhere, slowed down by a second down run being buried by a swarm of Hawk defenders for a 2-yard loss. Facing a fourth and 16, the Tigers punted to senior Hunter Rains who caught the kick on the 50-yard line. Rains ran left, then weaved through then past several Tiger defenders until he made it to the end zone for the score. Busey ran in the 2-point PAT for a 22-0 Blackhawk advantage with 7:02 left.

Green Forest finally made a first down, coming via a pass, but Tillman's quarterback sack cost the visitors 5 yards. The quarterback was run out of bounds by a swarm of pursuers on the next play for a 3-yard loss to force a punt. While there was no run back, it didn't matter as Busey connected with Ralph on a 79-yard scoring strike on first down. Busey ran the 2-point conversion in to expand the Hawk lead to 30-0 with 4:23 left in the first period.

The Tigers still found tough sledding against the Hawk defense, with sophomore Joe Adams slipping through to drop a ball carrier for a loss which helped force another Tiger punt.

This punt was caught by Rains and he nearly took it to the house, running 55 yards upfield to the Tiger 15. Beard slashed through the line for 14 yards to the 1, with Reyes taking it in on the next play. Reyes then kicked the PAT for a 37-0 Blackhawk lead with 2:41 left, thus activating the mercy rule less than 10 minutes into the game.

The Tigers were thrown for a 2-yard loss on their first play following the kickoff, then Harris rang up his second quarterback sack, this time for a 3 yard loss. Facing a 3rd and 15, the Tigers went to the air with Tillman swiping a deflected pass to give the Hawks possession on the Tiger 28. On second down, Busey found an open Harris who caught it and ran it in for the score. Reyes kick was right down the middle and the Hawks had piled up an incredible 44 point lead in less than a quarter.

The Tigers got off a 27-yard passing play to start the second quarter which saw the Hawks' bench getting cleared for the rest of the game. Green Forest then ran three plays for a net loss of 2 yards and they punted on fourth down.

Junior Carlos Martinez was given the ball for the Hawks' next possession. The Hawk running back ran seven times for 54 yards to the Tiger 1-yard line. With a third and 1 situation, Green Forest finally had some defensive success when they got a man past the Hawk blockers to hang a 7-yard loss on the ball carrier. Pea Ridge then sent Reyes onto the field to kick a 29-yard field goal with 4:21 left in the half. It split the uprights and the Hawks held a gargantuan 47-0 lead.

Playing against second and third teamers, the Tigers finally mounted a drive and went 80 yards downfield in 11 plays to finally get on the score board. Their kick was good, making the score 47-7 at intermission..

Senior James Fort batted away a pass to frustrate the Tiger offense to begin the third quarter, then senior Rhett Snyder barrelled through to hang a 7-yard loss on the Tiger quarterback on a first down play. On the next play, Fort, Snyder and junior Cole Travis chased the Tiger running back down 11 yards deep to push Green Forest back to their own 22 where they punted one play later.

Junior Ian Mullkin was then given the ball, rushing for 7, 5, 1, 2 and 7 yards before a fumble ended the Hawks' possession on the Tiger 25. Green Forest responded with a 13-play, 82-yard scoring drive that culminated with a 18-yard pass into the end zone with 5:42 left in the game. The kick was good and the Hawk lead was reduced to 47-14, and that was how the game ended.

Busey led the offense, hitting three of four passes for 141 yards and three touchdowns while scoring 2-point PATS twice. Rains, Harris and Ralph each received one pass, all of which resulted in a touchdown. Martinez led the rushing with 66 yards on eight carries. Beard ran twice for 31 yards, with Mullikin getting 27 yards on 10 tries, while Reyes was earning 14 yards on three attempts.

Nineteen Hawks recorded tackles in the game, led by a three-tackle performance by seniors Chandler Snow and Adam Trammel and junior Cole Travis. Sophomore Sophomores Logan Stewart and Braden Mincks, seniors Snyder and Lance Nunley and junior Samual Tillman each chipped in with two tackles each.

The Hawks will now close out the regular season in Springdale to face unbeaten Shiloh. For the second straight year, Shiloh and Pea Ridge have swept through league opposition to reach the final league game with perfect 6-0 ledgers.